Movies about lost, prehistoric lands have been a staple in film since the silent era. From “The Lost World” in 1925 to the Jurassic Park series of today, filmgoers have been fascinated by the idea that a hidden, prehistoric world could still exist in some remote location.

This brings us to The Land Unknown, a 1957 science fiction CinemaScope adventure film. The Navy goes on an expedition to the Antarctic to explore a seemingly tropical jungle in the heart of the frozen wasteland. Commander Hal Roberts (Mahoney) leads a group of four by Helicopter to the isolated region. The group also includes pilot Capt. Burnham, and reporter Maggie Hathaway (Patterson). 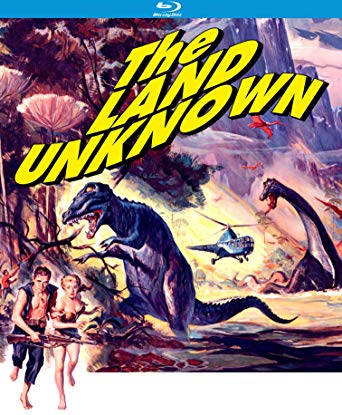 Their chopper becomes disabled and forces the group to land in the heart of the hidden jungle. Unable to contact their ship, the group explores the era and finds that it is populated by carnivorous plants and dinosaurs. The crew meets Hunter, the only survivor of a plane crash from an earlier expedition. He has learned to survive in this land with the aid of a conch that drives off the animals and by raiding the dinosaurs’ nests. He offers the remains of his airplane to repair the helicopter, but his aid comes with a steep price.

The crew must somehow try to survive the dangers of the jungle long enough to repair their helicopter and escape before becoming dinosaur food!

The Land Unknown is obviously a low-budget feature. The dinosaurs are a mix of puppets/props, men in suits, and live action footage of monitor lizards. Yes, the man-in-the-suit Tyrannosaurus rex is laughably bad but not without a certain charm. I would imagine that to a kid in 1957 that it was probably pretty darn cool. The film definitely captures the adventure of Saturday matinee features of the 40’s and 50s.

The cast is surprisingly efficient and fun to watch. Mahoney was known mostly for B movie westerns but was also a stunt double for A list actors like Gregory Peck and John Wayne. Shirley Patterson bore an uncanny resemblance to Janet Leigh. Among her credits were the 1943 Batman serial where she starred as Bruce Wayne’s love interest, as well as “It! The Terror from Beyond Space”. Reynolds rose to fame in the mid-1960s as a series regular in the long-running ABC series, The FBI.

If you can look beyond the cheesy, bargain basement special effects, the Land Unknown is a fine little adventure film. Kino Lorber, as usual, has delivered a pristine version of the movie in both audio and video