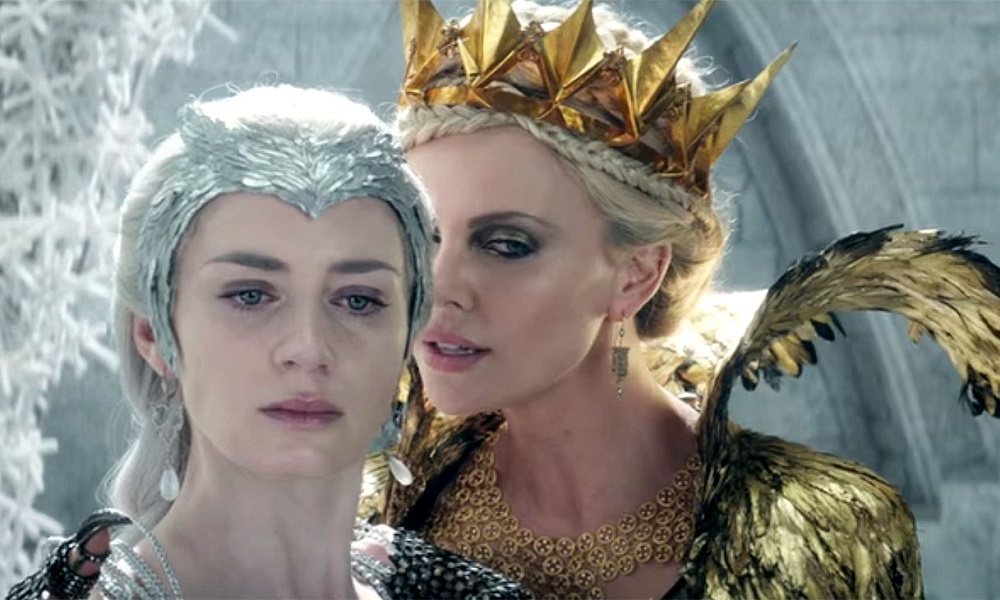 Another critic put their finger on it best: everything about this movie works incredibly well… except the most important part. Screenwriting, which usually consists of an underpaid, twitchy mole person oh-so-happy for the work, forms the structure on which the whole thing depends. It’s one of the least expensive parts of the process, and yet Hollywood has never quite figured that out.

So here sits The Huntsman: Winter’s War, both a prequel and a sequel to a movie no one much cared for and which few needed to see more of. Universal brought everything to the table: an all-star cast, amazing production values, another series of jaw-dropping costumes from the legendary Colleen Atwood. And none of it buys anything that one might remember more than five minutes after viewing it. Nothing happens in this movie; just pretty people glowering at each other and another epic quest that resembles a session of D&D run by a Dungeon Master in dire need of some sleep.

Ostensibly, it’s about Chris Hemsworth’s Huntsman: where he came from, why he does what he does, and what happens once he finishes putting Snow White on the throne. (No sign of Kristen Stewart here, for which the actress should be grateful.) His past is wrapped up in a thinly veiled retread of Frozen, as Queen Freya (Emily Blunt), heartbroken at the betrayal of her betrothed, retreats to the north and builds an army by murdering local parents and raising their children as her personal death squad. Because reasons. There’s a certain fairy-tale logic lurking under the surface of her scheme, but Winter’s War can’t find it, leaving a fine villainous performance from Blunt with nowhere to go.

The rest of the movie follows suit, from the death-and-rebirth of the Huntsman’s lady love (Jessica Chastain) to Charlize Theron’s curtain call as Ravenna, Snow White’s nemesis. Both of them bring their A-game and are ready to rock and roll, but the story takes too long setting itself up, leaving A-listers like these two idling in neutral instead of diving right in.

That feeling dogs the film from beginning to end, starting with Liam Neeson’s seemingly endless voice-over to get us up to speed and following through meaningless encounters with various monsters on the Huntsman’s long road to somewhere stopping something or another. He picks up some dwarves along the way to act as sidekicks – four, not seven, again for reasons that defy ready explanation – and they agreeably fill up the massive amounts of screen time required to make up for the distressing lack of a point.

The high production values are a treat to look at, and again, the cast gives it their all. Hemsworth is well suited to this form of swashbucklery, and while there’s something offensive about putting the face of tall actors like Nick Frost on the body of a little actor – you guys can’t find one actual little person to play the role of a little person?! – they evince good energy and an engaging presence. All of the pieces are here, just waiting to go. But director Cedric Nicolas-Troyan – an effects wizard helming his own project for the first time – retreats into his comfort zone way too easily, leaving his talented cast high and dry, and focusing on a lush look without pushing past it into anything more interesting.

In some ways, the look is enough to merit some interest: handsome and polished, with a lot of panache if eye candy is all you want. The actors deliver fleshed-out and interesting characters as well, with some nuance that you don’t often see in we-didn’t-really-ask-for-this sequels. But what’s the point if they move purposefully towards empty developments that never make themselves clear?

Winter’s War evinces its share of head-scratching logic holes and action scenes that lack any real heft, but they come a distant second over the biggest question of all: what are these talented people doing here? The movie simply can’t find an answer to that, and while I confess I prefer it to the misbegotten original, it’s hard to generate any enthusiasm for a film that lacks an engine to drive it. Story is still king, and all the other components are nothing but window dressing without it. Winter’s War provides an inescapable example of that principle in action.

At least the video quality is superb, allowing us to drink in the film’s main selling points without any pixilation or graininess to distract us. Audio quality is just as high and while the special features don’t exactly set off fireworks, they do their job well enough to merit a pass. (They include cut scenes, a gag reel, 5 behind-the-scenes docs totaling about 35 minutes, and a nice little audio commentary from the director.) Fans of the film – if any, in fact, exist – should be more than satisfied with the results…. Though I wouldn’t hold my breath for an extended edition.