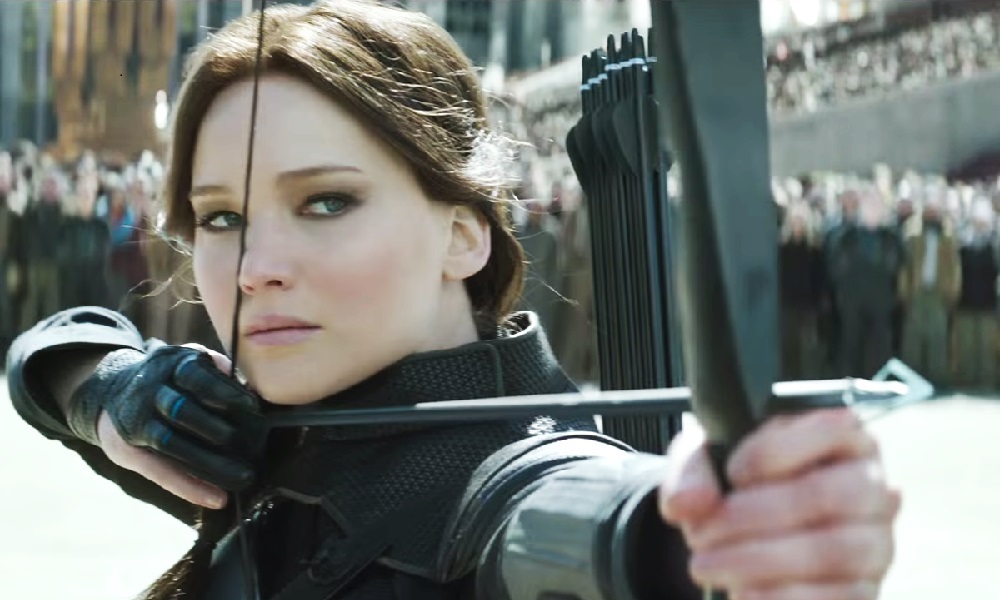 I was pleased to see a huge gang of high school students (about thirty or so) show up to my screening of Mockingjay, Part 2 last night. We’ve recycled so much pop culture these days – delivering sloppy seconds of beloved Gen X or even Boomer icons – that no one’s bothering to tell stories that speak to them more than us. The Hunger Games is a welcome exception to the rule, and considering how well the movies have done in adapting Suzanne Collins’ superb series of young adult novels, their joy at watching the finale brought to life so faithfully was infectious.

And faithfulness is by and large the name of the game here. If you’re arriving late to the party, do yourself a favor and watch the previous three Hunger Games movies before diving into this one. Like a lot of franchise finales, they don’t bother with a scorecard. We know the people, we know the conflicts, and with seven hours’ worth of background behind it, it gets down to the job of finishing things up with a flourish. Having survived an attack by her brainwashed would-be boyfriend Peeta (Josh Hutcherson), Katniss Everdeen (Jennifer Lawrence) now sets her sights on the Capitol and her old nemesis President Snow (Donald Sutherland). The revolution is in full swing in Panem, the post-apocalyptic future nation where the series is set, and with a few more hard pushes, Snow’s sinister regime may come tumbling down for good. Katniss will accept nothing less than executing the man himself, but before she can do that, she and her friends need to make their way through a booby-trapped Capitol that bears a more-than-passing resemblance to the barbaric Hunger Games that she has twice now escaped.

The film sets its goals up in a fairly straightforward manner, and you can have plenty of popcorn fun just watching our plucky protagonist avoid a messy death on the Capitol streets. Lawrence knows the character exceedingly well at this point: the reluctant figurehead now caught in her own living legend and used as a chess piece between the warring sides. Her resentment at her predicament slowly grows, and as the rest of the series has shown so beautifully, this is where The Hunger Games really earns its stripes. It’s an object lesson in the power of images, the way politicians jockey for power and the cost in innocent lives caught in the middle. Katniss is aware of her own status in the game, and though she uses it to try to keep her friends and family safe, you can sense the boiling fury beneath it.

That comes to a head in a marvelous climactic wrinkle, lifted perfectly from the book and made all the more delicious by Sutherland’s deviously compelling villain. (The whole cast does quite well, from Philip Seymour Hoffman giving one final curtain call to series newcomer Michelle Forbes, welcome for her return to the big screen and fitting into the proceedings like a comfy pair of slippers.)  Director Francis Lawrence understands the underlying message as well as the overt ones, and while Mockingjay, Part 2 never remains less that marvelous entertainment, its quieter points arrive with just as much power as the overt ones.

And it never misses a step, especially for those concerned about being true to the source novel without descending into de facto regurgitation. The Hunger Games series has been in sync since the beginning, on that front, and now with the final chapter laid out before us, we can admire it for the impressive accomplishment that it remains. The only criticism one can level against this entry is that it needs the other three to earn its dramatic heft, but that’s always the way with projects like this. The Hunger Games wasn’t the first franchise to hit movie screens, nor the most ambitious. But it demonstrates that Hollywood’s current obsession with multi-chapter arcs isn’t always a bad thing, and with the disappointment of Spectre still lingering in the air, it’s nice to see it perform its duties so faithfully and well. A round of applause for The Girl on Fire. I’d say she’s earned it.