The Hour of the Dragon – Classic Swords & Sorcery book review 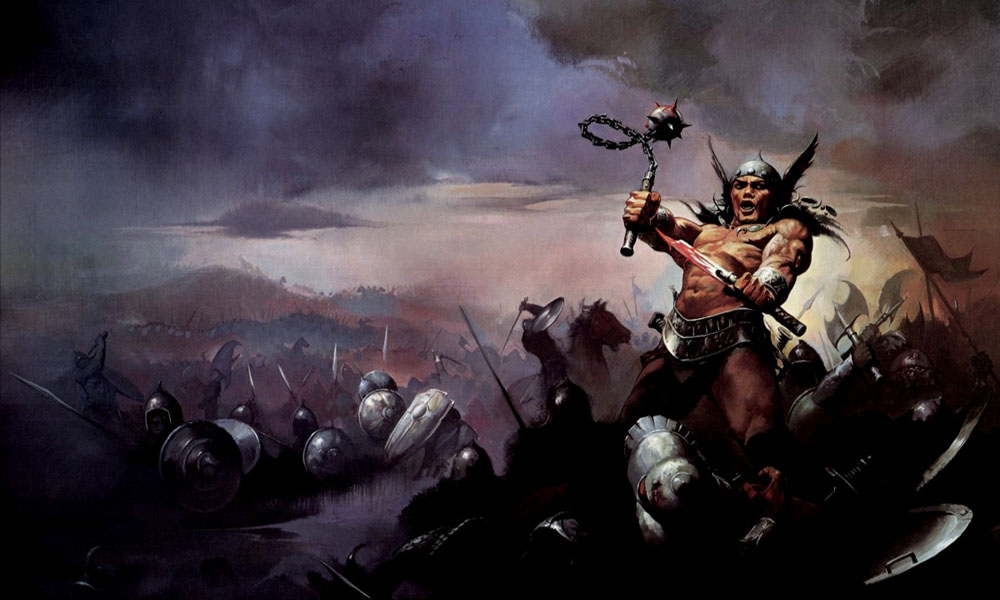 The Hour of the Dragon is the only full-length Conan the Barbarian novel written by his creator, Robert E. Howard. The story was first published as a five-part serial in Weird Tales between the months of December 1935 to April 1936. It was first published in book form in hardcover by Gnome Press in 1950 under the title Conan the Conqueror. 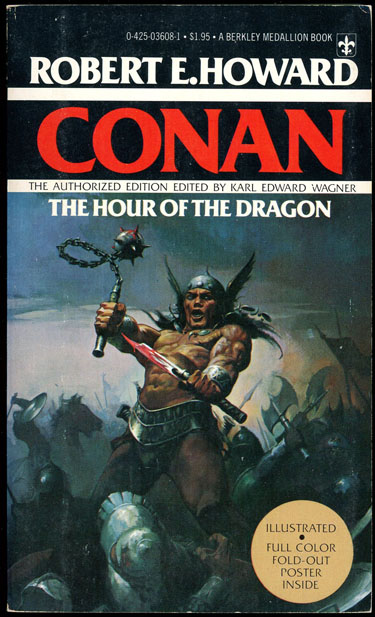 Berkley/Putnam re-issued the book 1977 which was edited by Karl Edward Wagner, was the first edition to restore the original magazine text and title. This was part of a series of Conan, and other Robert E. Howards books released by Berkley, all featuring cover art by fantasy legend Ken Kelly. The books all came with a fold-out, mini poster behind the front cover.

Conan is King of Aquilonia, one of the most powerful nations of the Hyborian era and in his early 40s as the novel begins. Conan has many enemies and they are not happy to see a foreign usurper sitting on the throne of Aquilonia. The four men, Orastes, Tarascus, Valerius, and Amalric, use a powerful artifact called the Heart of Ahriman to resurrect Xaltotun, a powerful sorcerer from ancient Acheron, a kingdom that existed 3000 years before Conan. With the aid of Xaltotun, the conspirators plan to kill Conan and install Valerius as the puppet ruler of Aquilonia. Conan soon finds himself powerless due to Xaltotun’s sorcery and locked away deep in a dungeon where he has to fight his way out with the aid of an unlikely ally and rescue his kingdom.

One of the more notable points about Hour of the Dragon is that the story takes place across several lands including Aquilonia, Nemedia, Argos, and shadow-haunted Stygia. This helps to make Hour of the Dragon not only a fantastic tale of swords & sorcery but also an epic quest fantasy as Conan seeks to find recover the artifact which can destroy Xaltotun and send him back to the grave. Throughout, Conan has to battle a seemingly endless array of monsters and sorcerers. Robert E. Howard also injected a heavy dose of court intrigue to round out a balanced novel of action and suspense.

If the plot to Hour of the Dragon sounds familiar you’re not just imagining it. The 1982 film “The Sword and the Sorcerer” liberally borrowed from Hour of the Dragon including the resurrection of a long dead sorcerer. The (horrible) 1997 film “Kull the Conqueror” was loosely based on Hour of the Dragon with Kull taking the place of Conan.

Hour of the Dragon is a fantastic story in which Conan has to call upon all of his cunning and resourcefulness to win back his kingdom. One quibble is that Xaltotun takes a back seat to other threats the Conan faces for much of the book. One can’t help but feel regret that Howard died so young and wasn’t able to produce more Conan novels.