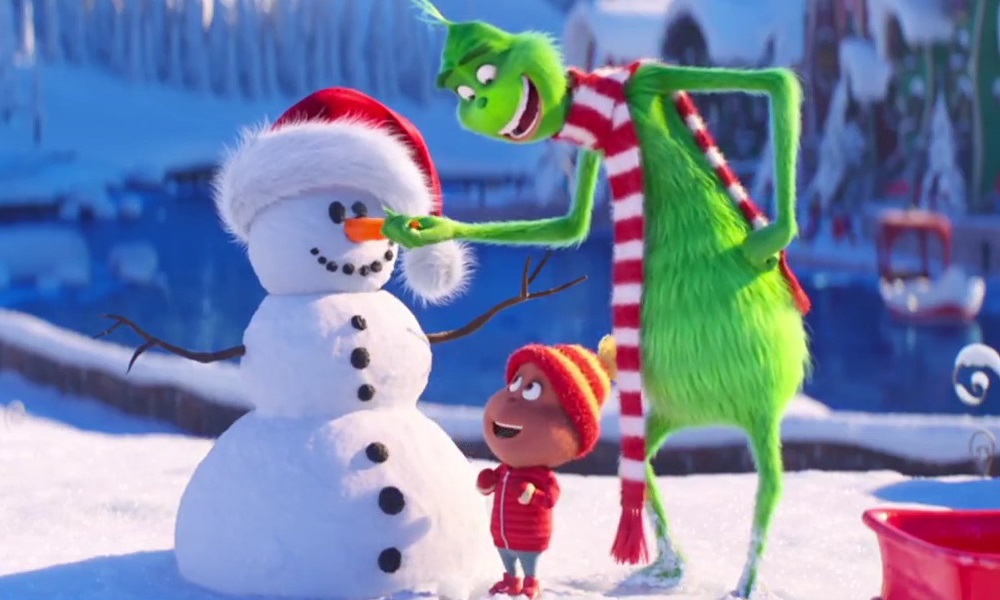 The chief complaint against The Grinch is the obvious one: was this Christmas-stealing really necessary? Ever-eager to exploit the famous Dr. Seuss property, Universal has released this second feature-length movie adaptation following the whatever-the-hell-that-Jim-Carrey-deal-was back in 2000. Both attempt to capture the magic of the original text: and by extension, the equally beloved Chuck Jones animated version from 1957.  This new movie succeeds in ways the live-action film didn’t… and yet the same fundamental problems prove its undoing.

The best parts come in its art direction and the overall look. The live-action movie was buried beneath the weight of excessive make-up, costumes and sets. The CGI version is much lighter on its feet in depicting Mt. Crumpet’s sourpussed resident and the happy town of Whoville just to the south. It stays true to the spirit of Seuss’s original drawings, while adding a few cute touches of its own that grant it some distinctiveness.

That extends both to the Whos themselves – happy, furry creatures who largely resemble modern suburbanites – and to the Grinch (voiced by Benedict Cumberbatch), who looks more of a kind with his neighbors than previous incarnations. His faithful dog Max is a winner too, able to speak volumes with a soft “woof” and quickly endearing himself with his signature loyalty. Directors Scott Mosier and Yarrow Cheney add plenty of whimsy to the landscape, particularly in the Grinch’s various Seussian gadgets which he uses to enact his fiendish plan.

If the canvas looks much more inviting than the last Grinch movie, however, then the same big issues confound its story: specifically, how to stretch the slender Seuss volume into a full 90 minutes. The Chuck Jones cartoon clocked in at under half an hour, and it needed a couple of extra songs to get there. Expanding the running time means embellishing the story… and frankly, there just isn’t enough there to justify the exercise.

The standard play is to look into parts of the Seuss dialogue that open the door for expansion… and then expand it. Case in point: why does the Grinch hate Christmas? Seuss was clear:

“Yes, the Grinch hated Christmas! The whole Christmas season!
“Please don’t ask why. No one quite knows the reason.”

That’s exactly the spot where some enterprising screenwriter can come up with a reason. In this case, they decided that the Grinch was raised in an orphanage and overcome with loneliness: a perfectly plausible (if lazy) foundation for Yuletide misanthropy.

There’s only one problem: it flies right in the face of Seuss’s larger point about the commercialization of the holiday and how it can sour people on the whole affair. Seuss left the Grinch’s motives blank because they weren’t necessary. He followed the above passage with a six-page Grinch rant about the toys and the food and the noise and the fuss. By developing that deliberately empty spot in his verse – as a necessity in order to fill the time required for a feature-length film – that larger point is eliminated. The movie simply drops it in favor of the notion that the Grinch just needs a hug. It’s folly to assume that a giant holiday film from a colossal international corporation would stick to Seuss’s script and remind us all that you don’t have to buy anything to have a Merry Christmas, but skirting the issues leaves a bad taste in the mouth.

Then there’s the Whos themselves. The live-action film made a major error by showing them as vapid and shallow, which messes up their quietly wise rebuke to the Grinch’s theft. The new movie does better, with the Whos more cheerfully clueless than consumer-driven jerks. Indeed, it’s Cindy-Lou Who’s  (voiced by Cameron Seely) dogged efforts to ease the burden on her single-parent mom (voiced by Rashida Jones) that launches the melting of the Grinch’s cold heart.

Again, that kind of addition is necessary for a feature-length film. It’s also obvious, by the numbers and fairly boring. It brings nothing new to the table besides the fact that Cindy-Lou is a fairly self-reliant kid. Furthermore, it leaves a huge credibility gap when the residents of Whoville wake up to find their Christmas gone and decide to celebrate anyway. Seuss kept the Whos in the background of his story to eliminate the awkward questions about why they’re so Zen about the sudden loss of all their stuff. The more you expand on their background and characters, the more you have to justify… and if said justification consists of bland platitudes about how angry people just need some friends in order to love Christmas, the results are decidedly wonky.

But the worst of it all is how much of the baby they throw out with the bathwater. The script contains a lot of Seuss-style rhyming, mostly delivered by narrator Pharrell Williams (?!). But large sections of Seuss himself are eliminated – such as the pivotal moment when Cindy-Lou catches Santa Grinch mid-theft – in exchange for a combination of banal singsong and conversation dialogue… none of which resonates in the least.  If you’re going to adapt the source material, it pays to show it more respect than this film seems capable of.

That shouldn’t come as a surprise. The Grinch was intended as a cash cow first, and its handsome surface speaks to an effort to at least give the audience their money’s worth. Nostalgia is an easy bet, and while the movie isn’t worthy of its pedigree, it’s far from the debacle it could have been. Those in need of a repackaged version of a well-known story won’t find any unpleasant surprises here… beyond the sense that the whole thing exists only to make money. The bauble is shiny, but hollow inside: something that couldn’t be said for Chuck Jones. One guess which one will get more screenings this time next year.