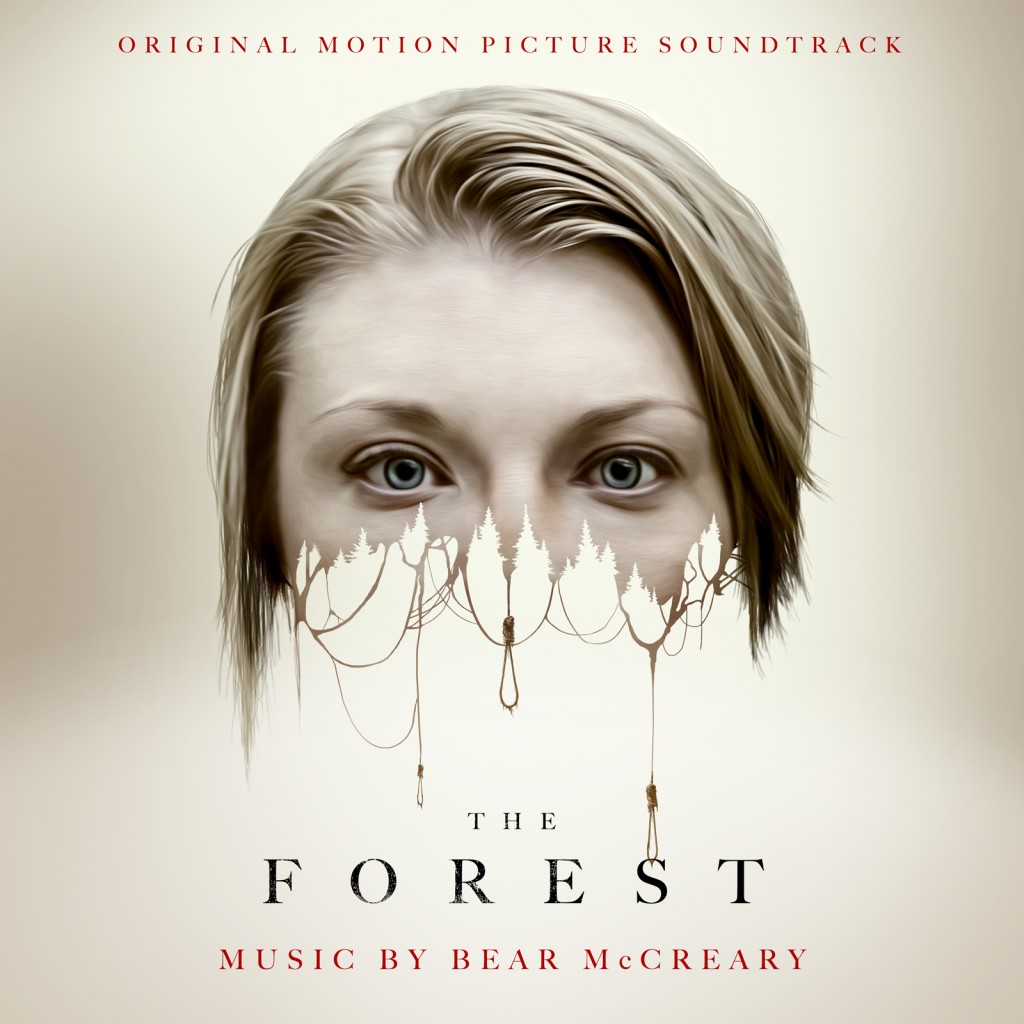 When I saw that Natalie Dormer was going to star in a horror film set in Japan, I became interested in The Forest. Being a Game of Thrones fan, I wanted to see her in a feature film that wasn’t a part of a franchise. When I learned that Bear McCreary was composing the score, I knew I had to have it. McCreary first came to my attention with SyFy’s relaunch of Battlestar Galactica. Since then, I am always on the lookout for a score by McCreary.

The Forest is a tale about a young woman, Dormer, who goes looking for her twin sister. Her sister has gone into Japan’s suicide forest, Aokigahara (also known as the Sea of Trees), and this is where Dormer’s character hopes to find her. Sadly, the film never played anywhere near me so I have no context as to what additional mood McCreary was trying to set. I have nothing more than a track listing. Thankfully, McCreary’s score paints its own picture.

“The Forest Main Title” (Track #1) sets a mood with its child choir, an ominous echo with swirling strings that no doubt leads the sister to Aokigahara and her fate. “Journey to Aokigahara” (Track #2) unfolds like the pages of book, with a chorus that reveals an unsettling atmosphere. Aokigahara, with its real world mythos, is only amplified by McCreary’s music. This is a place that might be a curiosity to some, but it is the end for so many others. This is a methodical and creepy piece of music that propels the listener ever forward. If I were to compare these incredible first two tracks, I would say that McCreary found inspiration in Danny Elfman’s Sleepy Hollow score and the work of fellow composer, Eric Serra. Serra’s work is famous for keeping beats that sound like the works of a large clock (listen to GoldenEye). McCreary keeps the beat here with a variety of bells.

“Into the Forest” (Track #3) sounds like something Howard Shore would have composed for Lord of the Rings. It is McCreary’s use of the bells that focuses your attention back to the fear at hand. Though when the bells are not present, it feels as if Sam and Frodo are sitting down for a quiet moment on the road to Mordor. “Follow the Rope” (Track #5) may be one of the most somber tracks on the soundtrack. It has a slight swing, which can only represent a jump or scare to the audience on screen. However, it feels as if a storm is brewing and this slight increase in the tempo is the rain about to fall.

“Curse of the Yurei” (Track #9) is harbinger of doom. This is clearly the climax to the film. It pulsates with a relentless beat. The chorus here maintains the same mood it has throughout the score. It never releases the listener from the horror at hand. It’s is the best track on the soundtrack, well, until you get to #10. Horror movie scores and soundtracks can go lots of different routes. They can be cheesy and fun or they can be restless and cunning. The “Theme from the Forest” is a little bit of both. McCreary plays up the guitars here, while combining the chorus and child choir for a truly creepy fun finale.

The Forest was not been well received by critics and audiences. If you are fan of Bear McCreary’s work on The Walking Dead or Da Vinci’s Demons, I suggest picking up The Forest. You will not be disappointed.

“The Forest Main Title” (Track #1) sets a mood with its child choir, an ominous echo with swirling strings that no doubt leads the sister to Aokigahara and her fate.

When I learned that Bear McCreary was composing the score, I knew I had to have it.

When I learned that Bear McCreary was composing the score, I knew I had to have it.

“The Forest Main Title” (Track #1) sets a mood with its child choir, an ominous echo with swirling strings that no doubt leads the sister to Aokigahara and her fate.

7. Alone in the Cave

9. Curse of the Yurei

10. Theme from the Forest