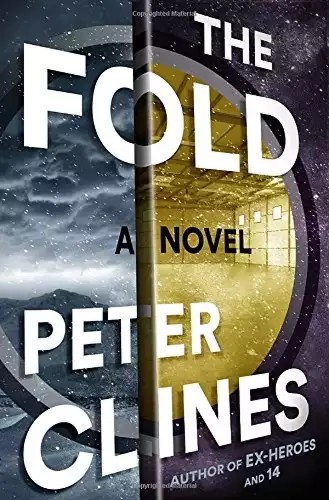 In his afterword, author Peter Clines describes his latest novel, The Fold, as a “side-quel” to one of his earlier novels. Don’t worry about this: The Fold works fine as a standalone novel. (Take this from someone who hasn’t read any of Clines’ previous works.) In fact, what we suspect to be the “side-quel” material seems a bit tacked on and unnecessary.

The plot is high concept: a small team of scientists has discovered a way of teleportation that doesn’t involve breaking down and reassembling a subject’s individual molecules like Scotty does in Star Trek. Instead, their teleport device is a StarGate of sorts that folds space. In the novel, a character illustrates how it works by folding a piece of paper with two crosses on it in the same way characters in 1997’s sci-fi horror flick, Event Horizon and the more recent Christopher Nolan Interstellar movie did.

This “Door” works fine and human guinea pigs went through it hundreds of times without any adverse effects. However, something seems “off” about the project. The science staff is taking a lot of sick days leave and someone who recently went through the Door went all paranoid schizophrenic and started accusing his wife of several years of being an impostor.

An English high school teacher named Mike is sent to look into the matter. On the surface, Mike being a high school teacher and all may seem like the least likely person to investigate a team of scientists who has Broken the Laws of Nature (which is a Bad Thing as science fiction readers have known since the publication of Frankenstein back in 1818). Looks are deceiving however: Mike has a rare “condition” that gives him a 100% memory recall. Mike remembers everything he has ever seen or read throughout his life with stunning clarity. This makes him a sort of science fiction version of Sherlock Holmes on maximum overdrive, ideal for investigating a bunch of scientists who are clearly hiding something.

Someone – I forgot who – said that fiction authors should never take cheap shortcuts by making characters look like famous celebrities. In The Fold, author Clines belabors the point that Mike looks like a young Alan Rickman, the English actor whom modern audiences will remember as the villainous Severus Snape in the Harry Potter movies. (Older movie fans will also remember him as the bad guy Hans Gruber in the original Die Hard movie as well as the Sheriff in the Kevin Costner Robin Hood flick.)

This didn’t bother me too much but the novel is filled to the brim with all kinds of contemporary pop culture references such as Kindles, Game of Thrones and Captain America: The Winter Soldier that will date the novel badly in, let’s say, ten years’ time. Sure, The Fold isn’t meant to be timeless, but rather a piece of disposable literature – something to read on the beach this summer holiday. Still, Clines could have extended his book’s shelf life by several years by not being so reliant on nerd culture.

Anyway, there is a mystery as the heart of The Fold that will make you keep on turning the pages. It is slickly, well-written science fiction thriller and the answers to the book’s questions came as a genuine surprise to this reader. But then the last 20 percent or so of the book comes round and the whole thing comes off the rails and The Fold veers off into a totally unexpected direction. This is not a good thing.

[SPOILERS] Without giving away too much, it is as if the author decided that the sheer science fiction mystery of the story isn’t enough, but what the book needed was some action movie stuff involving an invasion by bug creatures from another dimension. The tone of the book changes from something a thoughtful Michael Crichton would have written to an OTT Hollywood action finale directed by Michael Bay. (How’s that for pop cultural references that will be dated within a decade or so?) It’s a pity because it cheapens what has gone more before and turns The Fold into typical “beach material read” when it could have been something much more. [END SPOILERS]