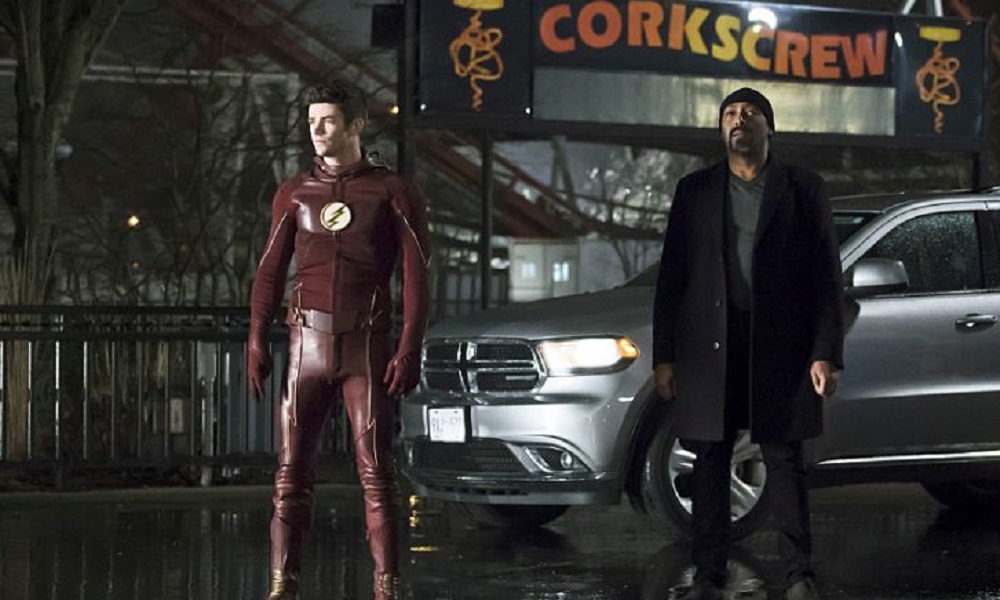 As a result of last week’s disastrous encounter with Zoom, Barry is left without his powers and Caitlin has been taken by Zoom to Earth-2. Barry has to adjust to everyday routine tasks without being able to rely on his super speed making for an amusing collage of clumsiness and waiting for mundane things like coffee. One positive is that Barry wasn’t shown as being dejected or wallowing in self-pity without his powers. However, an angry Wells lays the blame on Barry for opening the breach, allowing Zoom the opportunity to come and go as he pleases, and for Caitlin’s abduction.

Needing a break from the rest of the team, Wells sets off to track down his daughter Jesse who left a few episodes. Wells is attacked by a Metahuman named Griffin Grey, who mistakes him for the Wells of Earth-1. Grey (known as The Griffin in comics) was imbued with great strength and invulnerability due to the particle accelerator explosion but his powers come at a steep price. He ages at a rapid pace when he uses them and while appearing to be a middle aged man he is actually only 18 years old. Griffin threatens to kill Wells unless he cures him.

Back on Earth-2, Caitlin finally meets her doppelganger, Killer Frost who is locked in a holding cell across from the ever-mysterious man in the mask. Caitlin helps Frost escape but the villain immediately turns on her and tries to kill her. The timely arrival of Zoom saves Caitlin and delivers the final fate to Frost. Meanwhile, Jesse returns after learning that her father has been taken by Griffin and steps into Caitlin’s scientific role to help them locate his lair. But now Barry, without any powers, has to find a way to defeat Griffin before Wells is killed.

“Back to Normal” was essentially a breather episode after last week’s confrontation with zoom and next week’s previewed attempt to try to restore Barry’s powers. Griffin was a disposable villain but actually gets a bit more character development than other such one-time villains. Griffin is a sympathetic villain. He doesn’t use his powers for evil and wants nothing more than to return to being a teenager again.

That’s what makes the team’s approach to defeating him somewhat counter to how they do normally. The goal is to make Griffin exert himself to the point that he becomes so old that he keels over. It’s a harsh strategy from a group that is usually far more sympathetic to metahumans.

I loved the interaction between Caitlin and Killer Frost, even if Danielle Panabaker’s delivery is still wooden as Frost. There was an interesting tease about their mother, both of whom sound like they were a far cry from being a loving mom. Interesting too, that Killer Frost had a brother but Caitlin says she didn’t. Could it be she has or had a brother she doesn’t know about?

Well is visibly shaken by Griffin’s grief-stricken verbal attack even though he was not the Wells responsible for the particle accelerator accident. Of course, despite this, he still plans to try and recreate Barry’s accident to give him back his powers. It will be interesting to see how that all works out to say the least. Disposable villain but not a disposable episode.