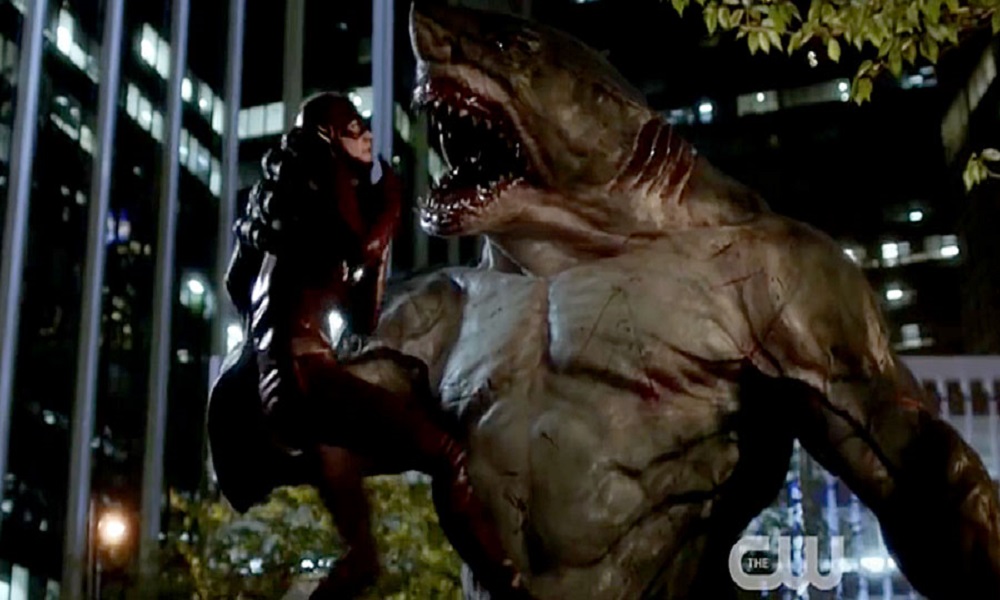 This week’s episode of the flash picks up at the exact moment that last week’s ended. After the jubilation of returning safely from Earth-2, the group watches in horror as Zoom’s hand reaches through the breach, and through the chest of Jay Garrick, and yanks him back just as the portal closes. Caitlin is crushed at seeing yet another love interest killed.

While I am not a big fan of the relationship drama elements of the series, this week things were handled quite nicely. Caitlin becomes withdrawn and dare we say “cold” prompting Cisco to worry that this could be what drives her to become Earth-1’s Killer Frost. Professor Wells, now trapped on Earth-1 with his daughter Jessie, warns Cisco and Barry not to tell people about the events and doppelgangers on Earth-2. But we all know how lousy Cisco is at keeping secrets.

John Diggle and his wife Lyla (the new head of A.R.G.U.S.) have come to Central City to warn Barry that King Shark has escaped and on his way to kill Barry. Now, the fact that Lyla is now head of A.R.G.U.S. is an interesting development that was glossed over quickly. It does point out the flaw in DC between the lack of continuity between their TV and Film universes since Amanda Waller is dead in the TV continuity but obviously playing a key role in the upcoming Suicide Squad film.

The other bit of drama is between Barry and Wally. Wally is resentful of the attention and love Barry gets from Joe and Iris. Even when Barry tries to help Wally with an engineering project the tension between the two is high. I am still not sold on Wally. His character being such a selfish little jerk is just far too contrived. Now that he has seemingly solved his angst with Joe and Iris, he’s now projecting it onto Barry.

King Shark was a minor attraction, really. But he did look very cool. The CGI effects for a TV show were extremely well done and on a par with big screen films. The fight between King Shark and Barry, while brief, was very cool. Despite Wells saying that the portals are closed for good, we know we have not seen the last of Earth-2 and its inhabitants…and of course the final scene provided what we all have been waiting for…the revealing of Zoom!