THE FINAL SIX is, I hope, a ‘Young Adult’ novel-what we used to call a ‘Juvenile Novel’ back in the day.

Juves were quite popular and, often, quite good. Robert Heinlein did a number of them for SCRIBNERS, all of which were entertaining and well written. Publisher Holt, Reinhart, and Winston released a number of Juvenile SF books in the early sixties, tapping legendary writers like Arthur C. Clarke; Jack Vance; and Lester Del Rey.

Alexandra Monir is not going to challenge them.

She’s not a bad writer—her prose is clear, grammatical, and easy to follow—but her book has the kinds of flaws we see far too often. The plot is, for the most part, familiar with a long sequence that owes much to THE HUNGER GAMES and its sequels. Her science is a bit odd (disclaimer—I read an uncorrected proof so it is possible that these problems will be eliminated—but I doubt it.)_In Monir’s world, it’s important to lock that airlock while in Space to prevent the ‘deadly atmosphere’ from getting inside. 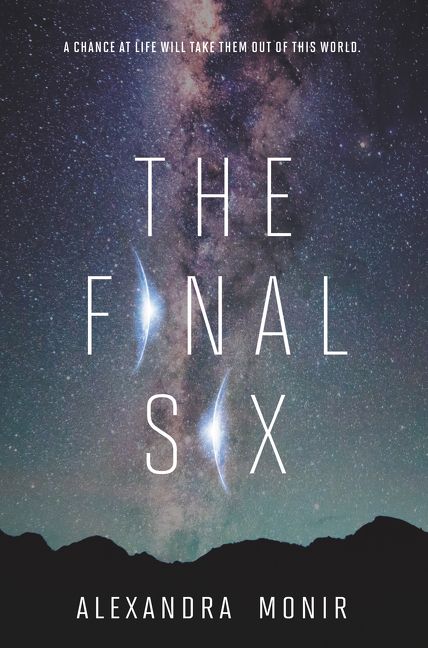 The book is set in what I think of as ‘Earth Gore’—a place where every disaster that Al Gore postulated in his book and film has come true. The seas are rising, earthquakes and tsunamis are common, as are great storms. Many of the world’s great cities are under water, food is scarce—you’ve read all about it elsewhere.

These ecological disasters are, however, picky about where the hit. Rome, the home of one of our protagonists, has been flooded. Los Angeles, far closer to the sea, has not…
You get the picture.

The UN and the various surviving governments have decided that rather than try to help the survivors, they’re going to put all their assets into sending six very special teenagers to Europa, there to start a colony that will save the human race.

There is a competition to become one of the six (HUNGER GAMES), some predictable romance between our principals; and some equally predictable roles for the teens (the President’s nephew is a self-centered dick—what a surprise!)

On top of this, it appears that the people running the whole operation are hiding valuable facts. Are there aliens living on Europa? Maybe…

The whole thing comes to a quite unbelievable end (which I will not reveal here) and those unhappy words: END BOOK ONE.
Yes, this is the first book in a series! What a shock!

I have to admit that I found the first half of the book quite interesting—a page turner that gives a look at an improbable, but not impossible, future. The second half, unfortunately, while still a page turner becomes less and less believable until, with a burst of teenage angst, it ends with a hard-to-believe denouement.

If you like (mostly) chaste teenage love, robots, and government machinations, you might like this. If you believe Al Gore was right and the climate is going to kill us all, you might like this a lot.
As for me, I’ll stick with Heinlein, Del Rey, and the others.