The Final Girls is a horror comedy that parodies slasher films, particularly the Friday the 13th series. Amanda Cartwright (Akerman) is trying to revive her acting career after starring in a series of slasher films known as “Camp Bloodbath some 25 years earlier. She returns from an audition where her daughter Max (Farmiga) is waiting. While driving home that are in a horrific car accident which kills Amanda. 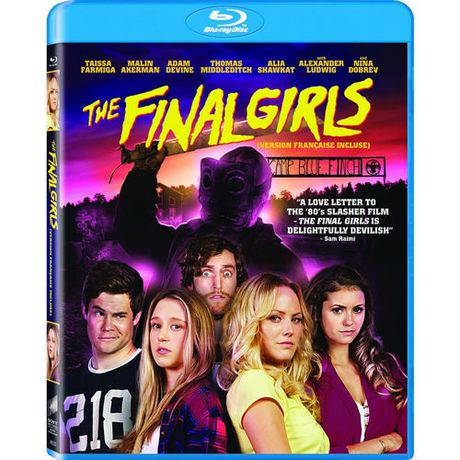 Three years later, on the anniversary of her mother’s death, Max is convinced by her friends Duncan, Gertie (Shawkat), and Chris (Ludwig) to attend a film festival of her mom’s notorious movies. Also in attendance is Chris’ possessive ex-girlfriend, Vicki (Dobrev). A fire breaks out in the theater and while trying to escape they cut a hole through the theater’s screen and run through…

Through means not explained, the five friends wake up in the woods and right in the middle of Camp Bloodbath. Before long they meet the film’s characters, including a young version of Max’s mom who plays Nancy. They of course have no idea they are only characters in a movie. Passing themselves off as camp counselors, Max and her friends relive the events in the movie but discover they are just as in danger from the masked killer known as Billy Murphy as the other characters.

Film buff Duncan knows that one girl always survives a slasher film and she is known as the Final Girl. The group believes that all they need to do is stay close to the film’s survivor, Paula, and they will be safe as well. But when Paula is killed they realize that no one is safe and they will have to find another way to stop the killer and survive.

The Final Girls is a fresh and fun film that both skewers and pays tribute to the slasher film genre. The film 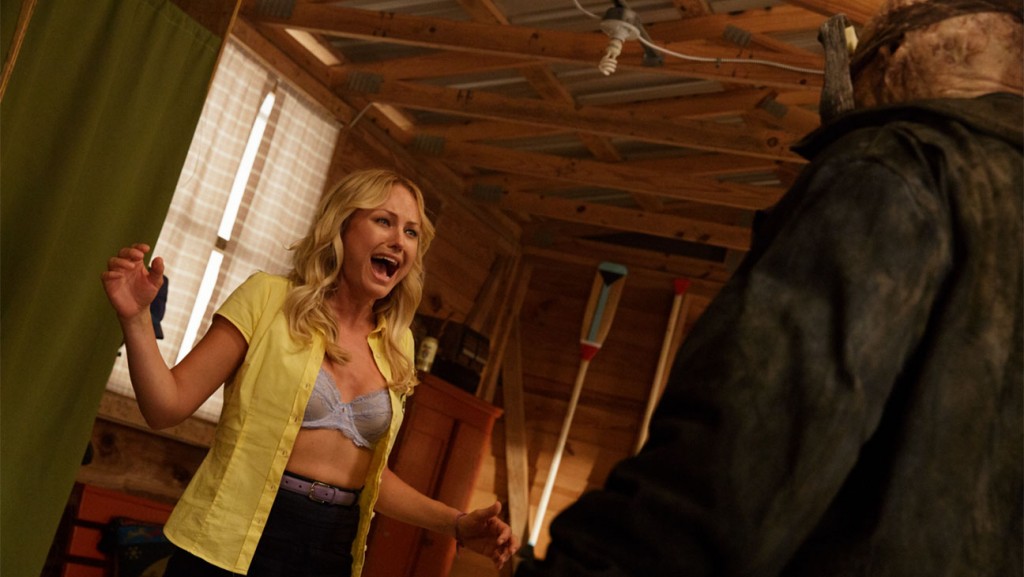 characters are broad parodies of those we’ve seen for years in these types of films…there is the nice girl, the sex-pot girl, the macho guy, the nerdy guy…and the actors play the stereotypical roles to their hilt. Tina, the sex-pot, has to have oven mitts taped on her hands to prevent her from taking off her clothes which, of course, attracts the killers.

There are also some very funny sight gags throughout the film. When they “dissolve” to a flashback sequence to learn the origin of Billy Murphy the graphic showing the year doesn’t just pop up on screen, it is a physical object which must be stepped over as the characters walk past.

Moments of pure slapstick are finely woven with horror action as well as dramatic moments. Max has a heart-to-heart talk with the teenaged version of her mother to convince her that she doesn’t have to give up her virginity just because she thinks it’s expected.

Its obvious not only from the movie, but from the outtakes at the end of the film that the actors had a lot of fun making this movie. Akerman, even though she is 37, looks fresh-faced and young enough to play her character both as an adult mother and as a vulnerable, innocent teenager. Farmiga is the opposite of her mom. She is skeptical and more resilient. Adam Devine is pure gold as obnoxious Paul who brags about his (completely overblown) sexual conquests.

Director Todd Strauss-Schulson knows exactly the right spots to go for horror and humor and as a result The Final Girls works well on both levels.  The only thing missing was some sort of explanation of whom or what caused the fictional and real worlds to collide.

Deleted, Alternate, and Extended Scenes (22:00): There are nine of these scenes in all!