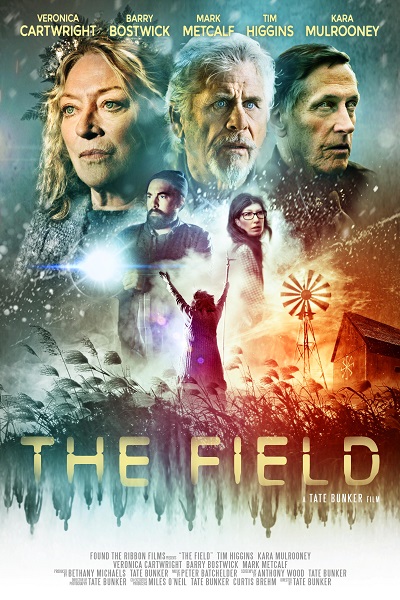 High concept is an ambitious gamble. You’re basically building from whole cloth a notion that began very small and, if you’re not careful, based on a trend that will become dated almost immediately after your adaptation is released.
The Field takes inspiration from a series of Internet ghost stories involving strange shadowy figures captured in photography or on video. Supposedly those present when the pictures were taken cannot see the phantoms at the time. Are these ghosts? Time travelers? Aliens?

Unfortunately for the mystique the highlighted example of this kind of spectral photography (the infamous image of a child with a mysterious ‘astronaut’ appearing to loom over her) has basically been debunked at this point as a blurry photo-bomber wearing a sunhat.

The Field feels like it’s trying to capitalize on a number of trends a couple years too late.
We’ve got photography capturing the unnatural. We’ve got homegrown cults with their wacky rituals. We’ve got suspicious rural folk who don’t take kindly to big city upstarts. You can find similar examples in a number of contemporary films, specifically horror films, and not much new ground is broken here.

It is an intriguing blend of nostalgic tricks and modern polish. I caught the integration of a plot concept into the film itself. I’ll save spoilers but I will say that it’s an admirable homage to the movie Fight Club. There’s a lot of psychedelic dream sequences here reminiscent of early auteurs and modern darlings. Not a lot of them make much sense but it’s a dream sequence so that’s perhaps to be expected.

The plot is simple and portrayed by likable actors. A young couple with a relationship in between extremes of tension and passion purchase a disused farm and discover it’s the site of disturbing events, disappearances, and the aforementioned photographic anomalies. The crusty townsfolk are evasive, weird neighbors pile on the unanswered questions.
It’s a competent set up and has a few twists, but the fact that this whole production was likely begun without knowing where it was going except for a couple of plot details is more than apparent very early on. A lot of the weird events are just left unresolved, which perhaps does a lot for people who like to prod deeper into a film’s underlying and obfuscated subtexts. To some however it will feel like a meandering series of nigh random events without a satisfying conclusion.
This and the woefully cheap looking costumes and effects put a damper on the atmosphere the EXCELLENT score gamely attempts.

But The Field isn’t a terrible way to spend time enjoying a bizarre who-done-it with spooky overtones. Ambition overrode the budget, but the ambition is appreciated.
And if you do see The Field you might watch it just for the wonderful music.