The Expanse Review: Fight Or Flight 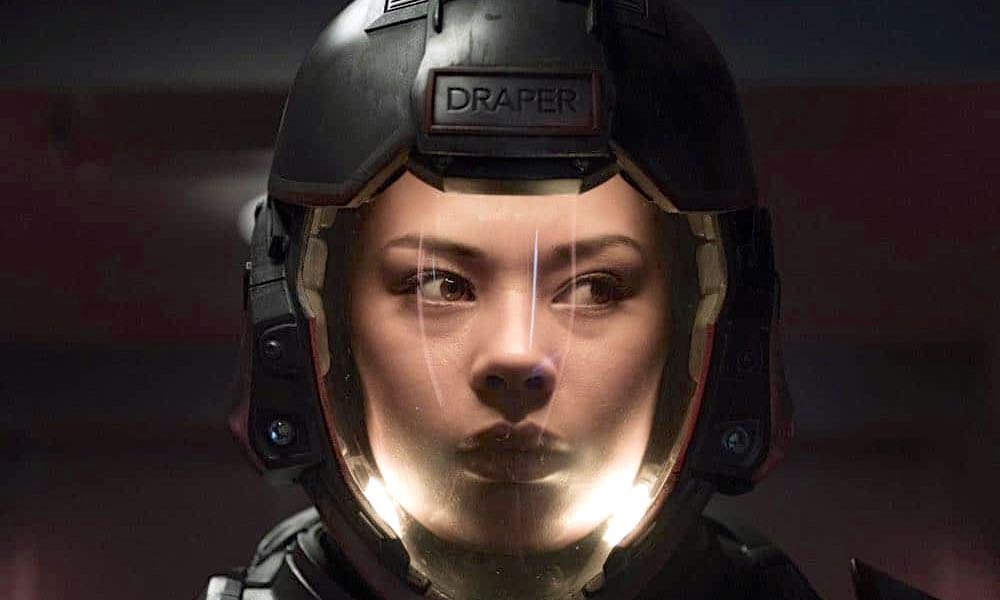 Is it me or has the normally somewhat perpetually grim Expanse finally begun to interject a little humor into the mix? I thought at first, I might be imagining it, after hearing  Cotyar’s query of “where’s our Martian Tank?” (referring to Draper in her armor suit), after regaining consciousness. Following a scene where Holden violently destroys a coffee maker. His venting some frustrations was witnessed by Meng who without hesitation suggests he try tea instead. The show’s creators were indeed attempting to tickle my funny bone. Otherwise it was business as usual with hardly any time having elapsed since we last visited the troubled solar system and its characters. The episode began with a lovely spaceship ride view of the star system from Venus outwards to Jupiter’s moons as a way to remind us of the context we are dealing with here in case we forgot.

It was nice to be back in the universe of the Expanse with it’s compelling and engaging visual style that always seems to find a way to remind you the people you are watching are in space are always in peril, and that everything you do has repercussions. There’s something this show does that somehow brings an added dimension of reality to the way things look more than other shows of this type and it seems to do it effortlessly.

It was a pleasure to see the cast at work again, like visiting old friends you haven’t seen in a while. Aghdashloo hamming it up, as usual, was somehow comforting to see and made me smile when she was once again in front of the camera.

As far as developments go there were several shifts in the relationships we have become accustomed to. Aboard the Rocinante which is adrift after the battle with the protobeing while making repairs. There is a brief glimpse of some protomaterial the cleanup has missed deep in the ship somewhere. Naomi’s betrayal has come to light and the rest of the crew now has less trust in her, and as a result, her influence as the leader is no longer as certain as it was. Like usual, the crew is bickering about what to do next, and Naomi is emphatically in favor of going back to Tycho Station, but she gets outvoted, and the decision is made to return to Io to see if any chance remains of saving Meng’s daughter.As another way of demonstrating the shifts taking place throughout the series, they change the name of the ship to avoid detection. Meng chooses a name based on a type of Pine tree that only releases its seeds after a fire – Contorta. There is a touching intermezzo of a classic letter from the front featuring Alex sending a letter home to his wife and child.

Meanwhile, on T Tycho Fred Johnson’s faithful aide Drummer is upset with him because he is making deals with Dawes regarding the protomolecule material.

Most of the episode’s action took place onboard Mao’s yacht where Chisjian, Cotyar, and Draper have survived a shootout with the yacht’s crew. Draper gets her armor and its a short fight after that. Shots of draper stomping around in that outfit are fun to watch and pretty impressive, there’s something about the way she walks in that armor that is petty cool. We also get treated to her doing a daring spacewalk outside the ship which dwarfs here tiny figure as it makes its way from one end to the other with her at one point barely holding on with her fingertips with nothing but infinite deep black space behind her. THere is another amusing scene involving Christian being left with a gun and left alone to guard an unconscious Cotyar. Followed by a daring escape from the yacht ina racing ship as missiles close in to kill them.

Back on Earth, the homicidal weasel Sadavir Errinwright  is doing his best to incite all-out war, and he succeeds in his campaign he also begins a campaign to destroy Chrijian’s reputation and betrays her with some serious false accusations

The episode deftly avoided the elephant in the room Venus and what the protomolecule is up to there. I strongly suspect  the next time we see the stuff on Venus it will be in the shape of a  ship based on the  UN ship it disassembled in the season 2 finale

It was a great episode it wasn’t a sensational or spectacular one, but it had all the requisite ingredients to for us to refamiliarize ourselves with the show, and included some very enjoyable and amusing moments. It’s good to have one of Tv’s best science fiction series back.Here’s a preview of next week’s episode.