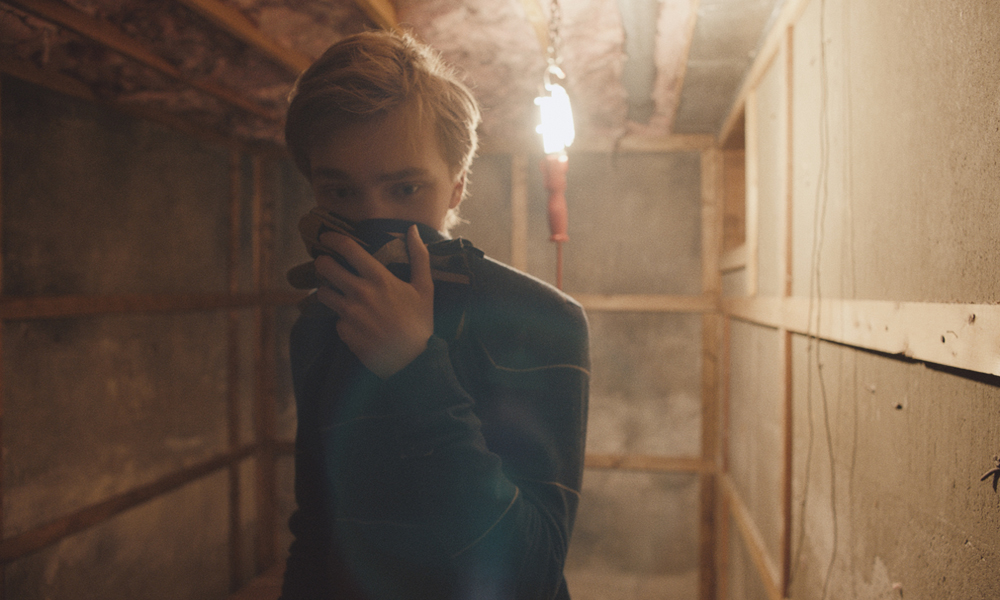 The CloveHitch Killer is like a fine painting askew on the wall: potential and flashes of brilliance rendered off-kilter by a few basic structural flaws. From very early on it’s clear the cast is quite accomplished. Every actor from bit part to the leads is natural, comfortable, and expressive in front of a camera. The direction is solid, not calling attention to the picture source, putting important details at the forefront, capturing the most affected character center screen. Lighting and post production drain the color from the proceedings to create a stylish but not distracting pallet of moody grey. Music is uncommonly absent, generally being either incidental or replaced by atmospheirc noises. It’s a first class film aesthetically, subtly and skillfully rendered. The stumbling blocks come when the story unravels. 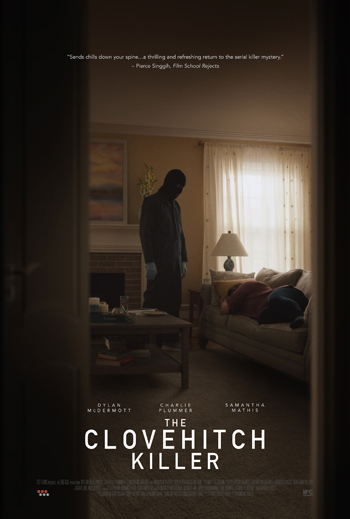 It’s undeniably an intriguing premise: What if someone you cared about was implicated in a heinous crime? Apart from the murder and theatrical details of a bondage obsessed killer it’s a relatable concept of knowing someone close did something wrong…or possibly did so. Who do you confide in? Are your suspicions paranoia or the truth? To its credit The CloveHitch Killer does investigate several possibilities at first as to whether the damning evidence our hero discovers is misconstrued or the result of trying to protect someone else. Secrets beget secrets and in an instant friendships and loyalties can twist when a lie is revealed.

The investigation is taut and the film at its best stews in the silent war of the protagonist’s mind as he weighs justice and the safety of others against his self-doubt and love. Juicy drama, effective horror, and a slow burn thriller all wrapped up in one.

Or it should have been. The stumbling block comes when the nature of The CloveHitch Killer becomes a little too blatant to be plausible. It would be one thing to have the killer simply kill people but discovery of a blueprint of a torture dungeon borders on comedically over the top.

Hitchcock might have been an excellent influence for the filmmakers to ponder. CloveHitch Killer might have been considerably more effective if the viewpoint of the story stuck to one character. Halfway through the film the viewpoint shifts to another character and then suddenly scenes we just saw replay, flash backwards, then replay AGAIN. This was needless in the grander scheme, provided very little additional information (because the ‘twists’ involved in these flashbacks the audience could easily have guessed at or already saw revealed) and it just seems like padding. This is especially evident when a crucial sequence towards the end is brushed aside until the last couple of seconds before the credits roll. If you don’t mind showing some things and not showing others you don’t have to replay entire chunks of the film just from slightly different perspectives. The audience has its own brain to work from and the convolutions of the plot could have been explained with the rewind and replay gimmick.

Finally there’s a personal issue I took with the film which may not effect the enjoyment of others but the conclusion felt disconnected from the whole of the feature to the point it was downright jarring. Lessons seem to be learned, then are ignored. The mistakes of the past repeat but for no real logical reason: more like there was some kind of nihilistic thesis statement being put forward about how everything is destined to go wrong or become evil.

It feels like the requirement of a horror film to have a downer conclusion but CloveHitch to that point didn’t feel so much like a typical horror film. Not much blood or gore, likable characters, naturalistic dialogue: it’s practically the anathema of modern horror. But at the finale the twist doesn’t seem unsuspected so much as conventionally grim.

It’s a nicely paced character piece and mystery story that stumbles and falls towards the finish.