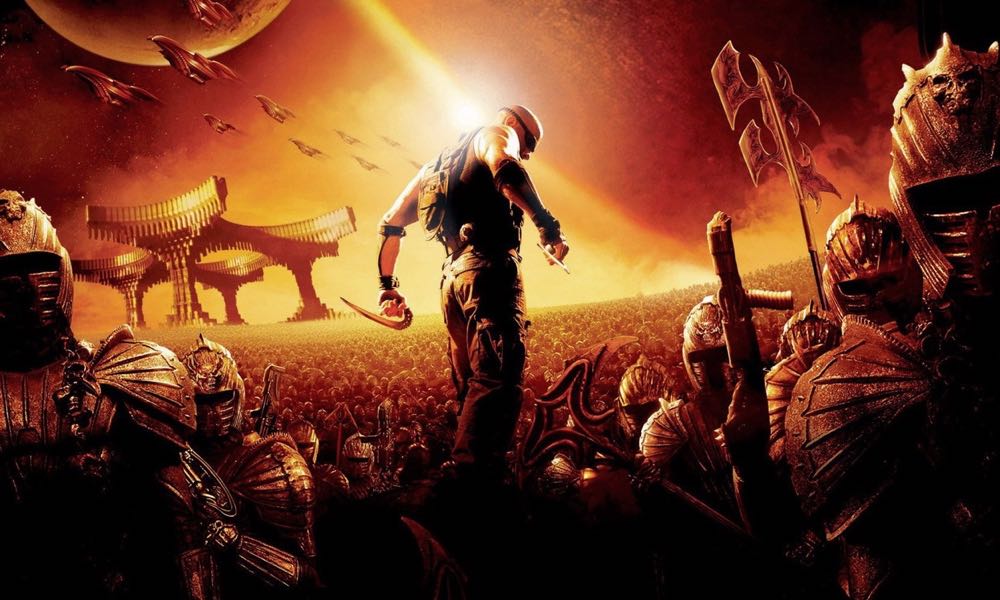 It’s tragically ironic that the number of excellent quality outer space adventures falls far short of the number of films one might expect to find regarding genre films. The fact is, outside of The Star Wars and Star Trek and Avatar franchises, there’s not that much going on in the subgenre these days. With that in mind, one is prepared to make certain allowances when an outer space adventure finally arrives that doesn’t quite get it right.

Revisiting The Chronicles Of Riddick the other night made me realize that this is the closest we will ever come to that long-awaited Furyan sequel and how close we came to almost getting another classic outer space adventure franchise.  This film has its moments, but ts no secret that, overall, Twohy’s script and direction misses the target by a wide margin in this production that resulted in a film sadly doomed to disappoint.

For those unfamiliar with the title, The Chronicles of Riddick is a 2004 American science fiction film directed and written by David Twohy.  Vin Diesel reprises his role as Riddick with a cast that includes Thandie Newton, Karl Urban, Colm Feore, Linus Roache, Keith David, Yorick van Wageningen, Alexa Davalos, Nick Chinlund, and Judi Dench. The cast all does a good job here with memorable performances by Karl Urban,  and Alexa Davalos and Keith David is always a welcome presence in any production. Thandie Newton is sexy as hell as the self-serving and manipulative Dame Vaako. It isn’t easy to understand precisely why Judy Dench’s character is even in this film beyond her CGI altered visually striking appearance.

Surprisingly, this film’s fight scenes are almost amusingly old sool and not that interesting except for a  couple of moments intentionally staged to stand out from the rest. I saw many old school professional wrestling moves that got a smile out of me once or twice.

Vin Diesel shines as Riddick in this; he’s at the peak of his career, looking lean, dangerous, and perfect for the role. Rewatching this film is a reminder that, like the rest of us, Diesel is not immune to the passage of time. After watching Bloodshot the other day, it’s evident that, sadly, he’s getting a little too old ever to play the Furyan again.

I don’t hate this film; in fact, I like it, but it’s far from perfect. This film makes one mistake by killing off its two most complex and engaging characters, the holy man Imam played by Keith David, and  Jack/Kyra, played by Davalos. I understand there’s an unwritten law at play here, revolving around the idea that anyone that gets close to Riddick dies. However, still, it’s a shame Twohy couldn’t think of a way to keep those characters alive and have them possibly form some uneasy alliance with Riddick going forward. The Chronicles Of Riddick is a cliched film populated by types that come and go without getting fleshed out enough to make us care when they inevitably die.

The film attempts to develop Riddick more fully as a character this time around, and Twohy uses two approaches to accomplish this feat. First, he decides that Riddick, his outer-space version of a capeless Batman, should talk more, which is slightly out of character with his man-of-few-words persona. Secondly, the script spends a lot of its time reinforcing just how tough Furyans are by putting a series of random, challenging obstacles in Riddick’s path that he cleverly avoids or resolves with ease.

The Chronicles Of Riddick attempts to cover new ground while trying to tie this film into Pitch Black (2000), where the character made his first appearance. In attempting to accomplish this,  Chronicles spends too much of its time on the latter while shortchanging the former. This film only briefly offers up part of a tragic origin story used to help explain a plot device involving a prophecy. If the film had properly addressed this premise with the potential scope and scale of Riddick going to war with a murderous religious cult that is an outer space futuristic version of a Spanish Inquisition, we might have gotten a franchise we could enjoy time and time again. C’est la vie, sometimes fate works in our favor, and sometimes it doesn’t. Happy viewing.