The Chronicles of Caylen-Tor – Book review

It seems these days that the major publishing companies want only to hook fantasy readers into series that will seemingly go on forever. I mean, good luck if you’re over the age of 50 and you start a new series. It MIGHT be finished by the time they send you to your final resting place. Heck…Robert Jordan did not even live long enough to see the conclusion to his mega-epic Wheel of Time series. But thankfully Swords & Sorcery fiction, notable for its shorter, action-packed stories, is making a comeback. One of those companies is DMR Books, who specializes in fantasy, horror, and adventure fiction in the traditions of Robert E. Howard, H.P. Lovecraft, and other classic writers of the pulp era. 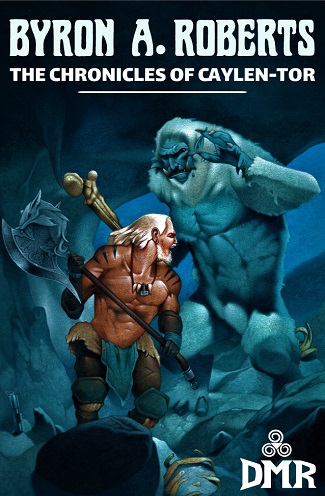 DMR is one of a number of small publishers who are revitalizing the swords & sorcery genre with tales of characters in the tradition of Conan the Barbarian, Solomon Kane, Thongor, Brak the Barbarian, and Kane. DMR not only publishes fantastic books but features a regular blog with articles about swords & sorcery and horror fiction and history that is outstanding. I urge fans to check it out at their site: https://dmrbooks.com/

One of DMR’s latest releases is The Chronicles of Caylen-Tor by Byron A. Roberts. Roberts is an author of pulp fantasy and sword & sorcery stories and the vocalist/lyricist/founder of the UK extreme metal band Bal-Sagoth. Roberts has contributed stories to the Swords of Steel anthology series (also from DMR).

This is classic sword-and-sorcery that will be appreciated and enjoyed by fans of Robert E. Howard and Clark Ashton Smith. Though, CAYLEN-TOR is by no means derivative.

Within these pages you will find barbarians, pitched battles, serpent-men, battle mages, and an evil sorceress. The prose is thick, but the author balances it with well-written action scenes. Three installments that span many years in the life of the protagonist comprise THE CHRONICLES OF CAYLEN-TOR and the appendices at the end of the book are a nice addition.

If you collect sword-and-sorcery, and like to re-read your Conan, Kull, Elric, and Kane stories you will likely want to come back to this book multiple times, as well. I bought it on kindle then picked up a mass-market paperback from the publisher for revisiting later.

The book is available either as digital, or in standard or trade paperback editions. Check it out here:
https://dmrbooks.com/the-chronicles-of-caylentor