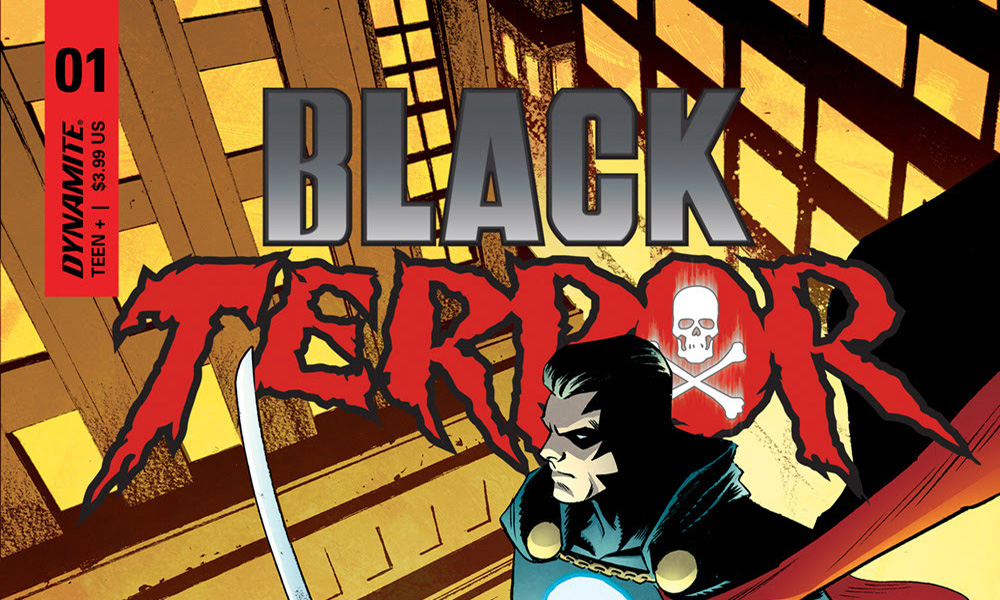 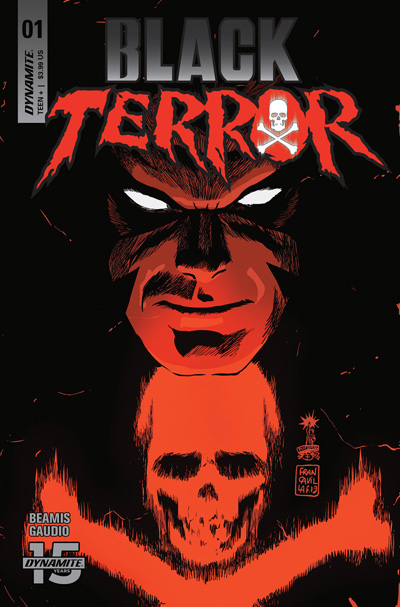 Described by “Dynamite Entertainment” in its August 2019 comic book solicitations as “a ride through the life of a superhero and all the weirdness along the way”, Max Bemis’ plot for Issue One of “Black Terror” definitely takes its readers on a disconcertingly downward journey into the nightmarish world of a costumed vigilante suffering the severe effects of post-traumatic stress disorder. Indeed, for the vast majority of this publication it seems likely that at any moment the “all sweaty” Bob Benton is going to cast aside “his boring life of being a pharmacist” and suddenly re-enact one of the grisly World War Two horrors he faced upon some hapless customer innocently attending his Chicago chemist store; “Uh, Bob? Bob. It’s okay, Sir. He’s had a long shift.”

Fortunately however, the New Yorker’s narrative isn’t simply limited to a carousel of uncontrollable thoughts concerning the Golden Age protagonist’s past battles against goose-stepping goons, swashbuckling femme fatales and swastika-wearing megalomaniacs, courtesy of the titular character’s chance encounter with a seemingly innocuous shoplifter. Benton’s gruesome discovery as to the softly-spoken man’s true criminal calling genuinely provides this twenty-page periodical with a drop-dropping moment, and imbues the rest of the comic with some much-needed pizzazz.

In fact, no sooner has Bob once again donned the skull and crossbones costume of his super-powered alter-ego, than the entire book’s somewhat pedestrian premise is turned upon its head, following the revelation that the anxious apothecary has actually been busy all this time being babysat by the grand-daughter of his arch-nemesis Black Satan. This shocking revelation hardly transforms Bemis’ script into the “Alan Moore take on the Project Superpowers universe” which the American author rather conceitedly suggested it does to the “Bleeding Cool” website, but it should definitely reignite the interest of any within the comic’s audience who were finding themselves wilting under his penmanship’s depressive, dialogue-driven storytelling.

By far the more consistent contributor to this magazine’s success is artist Matt Gaudio, whose prodigious pencilling does a splendid job of depicting the subtle differences between the stubble-faced, spectacle-wearing Benton and the savagely brutal war veteran originally created by Richard E. Hughes and Don Gabrielson way back in 1941. Noticeably well-muscled whether he is wearing a white laboratory coat or a jet black cape, the Kubert School graduate still manages to provide Benton with two vastly contrasting personalities dependent upon whether the hero is dejectedly going about his boring day-to-day routines or manically slapping a villain about the head at least a couple of time too often.