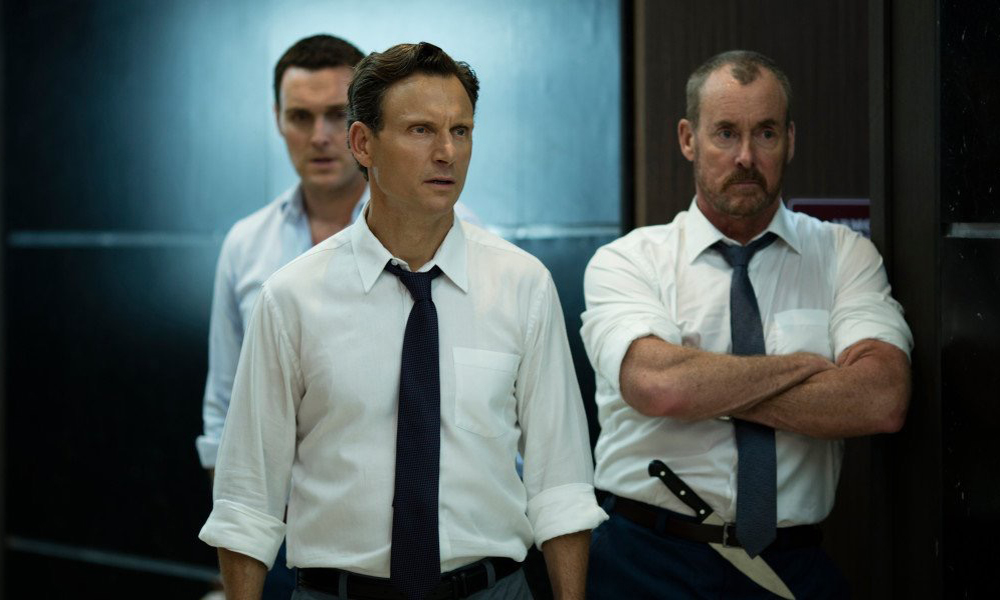 Taking a page from the 2000 Japanese film “Battle Royale” as well as “The Purge” film series, this James Gunn 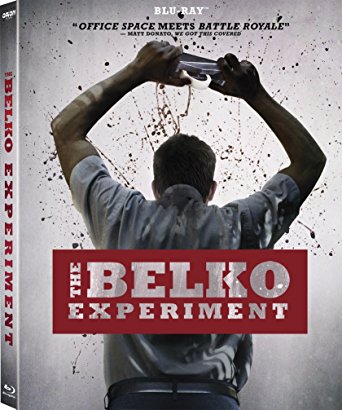 (Guardians of the Galaxy) scripted and produced survival horror finds 80 employees of Belko Industries trapped inside their high rise headquarters in Bogota, Columbia when a mysterious voice comes over the intercom and tells them that they must kill 30 of their co-workers within two hours or THEY will kill 60 of them. This sets off a killing frenzy as co-workers and friends align against each other in factions divided by class to see who can survive.

We learn from new employee Dany, that Belko is a non-profit organization that helps American workers find work in Columbia. All new employees at Belko have a tracer chip installed in the back of their heads due to the high rate of kidnappings in the violent nation. The employees soon find out in grisly fashion that what the chips actually contain an explosive capable of killing them instantly with the flip of a switch, demonstrating that whoever has them trapped is in complete control of their lives.

While smarmy and self-important COO Barry (Goldwyn) leads a group of executives that includes creepy Wendell (McGinley),  IT Manager Mike (Gallagher) leads a group that includes his girlfriend Leandra, his secretary Peggy, and security guard Evan. Meanwhile, in another part of the building maintenance guys Bud (Michael Rooker) and Alonso first work together but soon turn on each other. Also in the mix is Marty (Sean Gunn) a paranoid cafeteria worker and his buddy Chet (Abraham Benrubi).

The Belko Experiment is essentially an urban version of Lord of the Flies as we quickly see how the desire to live can outweigh even the deepest friendship. Gory and grisly with a group of kills that would have any slasher film envious, the script is sprinkled with great bits of sarcastic humor in the face of horror as you would expect from Gunn. The characters quickly become exaggerated caricatures of themselves when they realize they have no recourse but to try and kill those they had sat next to in cubicles just hours earlier.

At just 89 minutes The Belko Experiment is just long enough…with just enough gun blasting, ax swinging, cleaver slashing action that you don’t ask too many questions about the paper thin plot and unsatisfying reveal at just who was behind their captivity and why.

The film is powered by its sparkling cast of diverse characters and nearly non-stop mayhem from start to finish. It didn’t get much of a theatrical run but I suspect that this is a film that will have some replay as a cult classic.

Rules of the Games: The Secrets Behind The Belko Experiment (9:56) A look at the making of the film