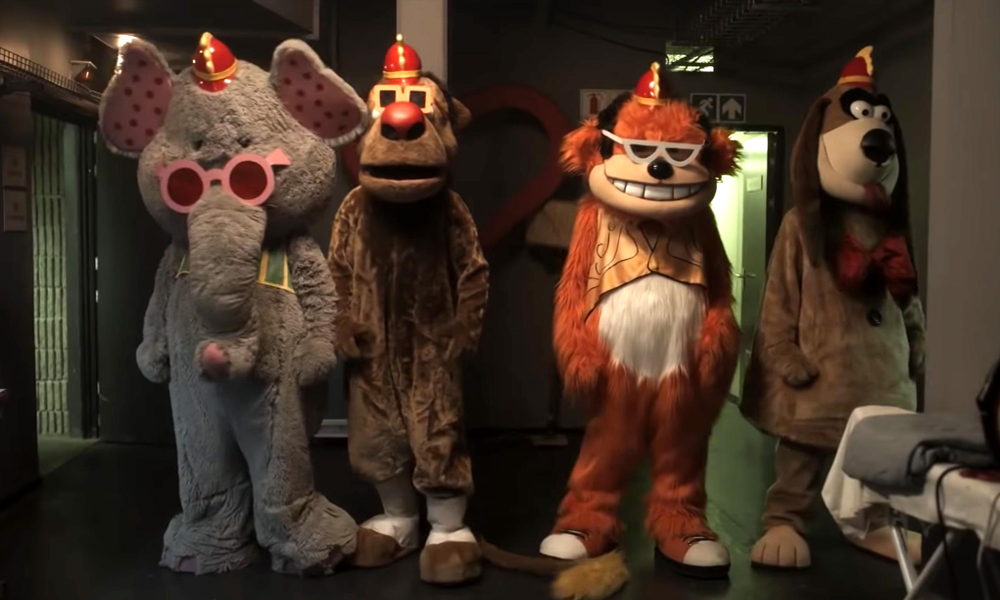 When I first saw the trailer to this film I thought it had to be one of those fan-created fake trailers that pop up from time to time. Unless you are over the age of say 40 or so, you really don’t remember the era when the three major TV networks (before cable) would run children’s programming on Saturdays from morning until early afternoon. In particular, the era from the late 1960s until the early 1980s was the golden age of Saturday morning kid’s 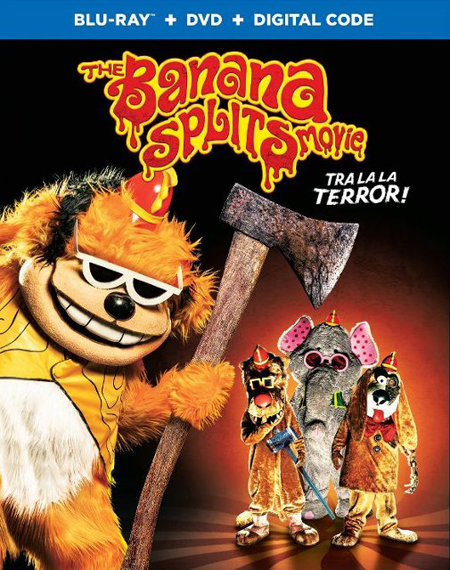 entertainment. While most of the shows were animated, there was a smattering of live-action shows. One of those shows was The Banana Splits, created by Hanna-Barbera, which ran on NBC from 1968 to 1970 and then for several more years in syndicated re-runs.

The show might best described as the Monkees crossed with funny animals. The Banana Splits were a fictional rock band composed of four funny animal characters. The costumed hosts of the show are Fleegle (a Dog), Bingo (an ape), Drooper (a lion) and Snorky (an elephant). Like the Monkees the characters had various slapstick adventures mixed with musical segments and featured the catchy theme music “The Tra La La Song”.

Set in present day, the Banana Splits movie puts a distinctly spin on the show, turning it into a horror film. Somehow the Banana Splits series is still on the air all these years later and little Harley Williams (Wotjak-Hissong) is a huge fan. For his birthday, his mom (Kind) surprises him with tickets to a live studio taping of the show. Accompanying Harley to the taping is his stepdad, Mitch; older brother, Austin (Carere); and his classmate, Zoe.

We learn early on that the Banana Splits are not actually actors in suits but high tech robots created by nutty old Karl, who fixes and programs the robots in his dungeon-like workshop at the studio. When the network suddenly decides to cancel the show, the robots decide to take matters into their own hands, killing the various stage hands and guests and abducting the children so they can continue to have a “captive” audience to entertain because the show must go on.

Not quite sure the idea to make the Banana Splits robots was the best route to take. Seems to me that maybe adults, who finally go nuts after years of dressing in an animal costume, would have made more sense and been more terrifying. Such is the problem with the film. It wants to straddle a line between actual horror and campy spoof. Either would have worked better than trying to do both.

Once you get past the initial novelty of these funny animal characters, beloved by kids 50 years ago, now turned into rampaging, robotic killers, there isn’t much for the film to stand on. The performances are stiff and lack commitment. Only Naledi Majola who plays Paige, a production assistant, and Romeo Carere who plays shy, older brother Austin, distinguish themselves. If you’re into gore and slasher films there are a handful of gruesome deaths done in a slapstick fashion.

Maybe this will start a trend? Perhaps there will be an update on Sigmund and the Sea Monsters where they are actual monsters. Yes you might have to Google that.

The Banana Splits: Behind the Horror (8:21) –a look at how the old TV show was updated for modern horror audiences

Terror on Set (6:25) – How the production team kept the look and feel of the old sets from the TV series.

Warner Bros. sent this video to me for free so I could review it.