STRAW KIDS: A REVIEW OF THE BABYSITTER (2017) SANS SPOILERS

The Babysitter (2017), directed by McG and released by Netflix, is a comedy horror film that could’ve been as good as the first two “Scream” movies and for the first half is. Like Robert Rodriguez’s blackly comedic action-horror vampire film From Dusk till Dawn (1996), The Babysitter is excellent until after the first round of conflict following the “inciting incident”—the plot point that catalyzes the protagonist to take action—and then decays into a disjointed series of violent, silly incidents. It’s still entertaining but becomes bereft of structure, logic, and verisimilitude. 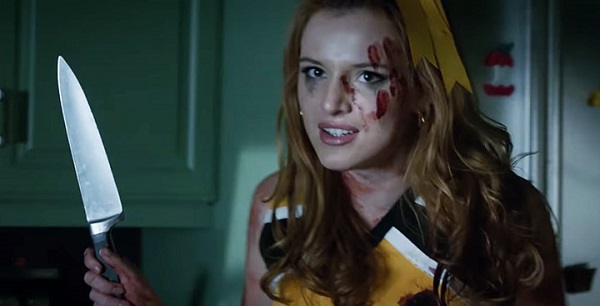 This is a shame because The Babysitter bursts with cleverness and exuberance. Its lurid, vivid visual style gives it a Tom and Jerry cartoon’s energy. Its over-the-top violence and gore add to rather than compromise its comedy. And its likeable performers deliver funny, too-cool-for-school dialog such as “This kid’s hobby must be getting bullied,” “Don’t shoot! Black lives matter, too!,” “Three out of four people got an STD; I got two people’s blood on me! You do the math! I got AIDS! I know I got AIDS!,” and “He shot me in the boob! What kind of dick shoots a girl in the boob?”

Best of all is the chemistry between the two leads, the 12-year-old protagonist played by Judah Lewis and the eponymous babysitter played by Samara Weaving. 12-year-old Cole Johnson is a wimpy kid afraid of needles and driving, bullied by his classmates, and still in need of babysitting when his parents stay out overnight. Luckily for him, his babysitter “Bee” is a hot blonde tomboy who dotes on him and seems to share his love of geek culture (e.g., SF and cult movies). In a truly touching moment he tells her, “Thanks for knowing me and treating me like I was OK.” 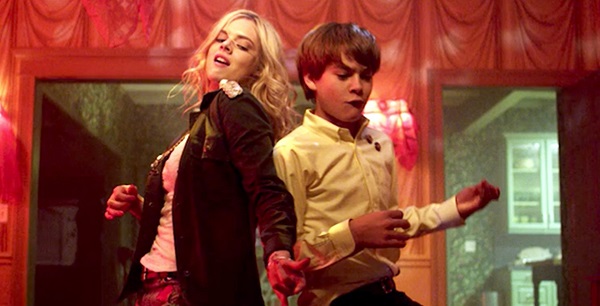 Thus, the nerdy boy and his too-cool-to-be-true babysitter provide the silly, campy meta-movie with a strong emotional core that keeps the audience invested when the plot no longer does. The second half of the movie is an R-rated horror version of Home Alone (1990) that fires all the “Chekhov’s guns” placed in the first act and propels Cole through his Straw Dogs (1971) character arc from pusillanimous zero to homicidal hero but is not dramatically satisfying. So The Babysitter’s second half merits a C and its first half an A, which average out to a B.

But a B (as in “Bee”) is still good, and The Babysitter is still worth seeing all the way through its post-credits scene.