The Art of Rocksteady’s Batman takes a look at the groundbreaking videogame franchise that set the gaming world on ear when Batman: Arkham Asylum was released in 2009.  This massive, hardcover book takes a look at the series from concept art to finished design. 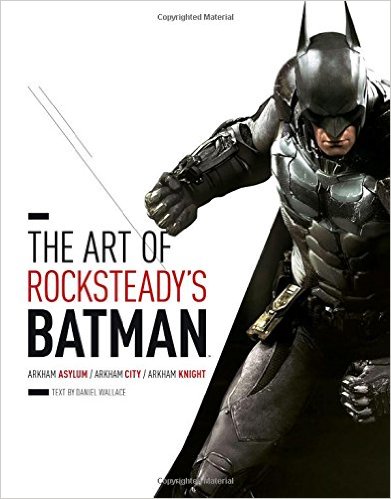 The book is divided into three parts.  Part one looks at how the small, and relatively unknown studio, Rocksteady, became involved in the project and made their pitch for building the dark and gritty world of Arkham Asylum.

The next three parts make up the vast bulk of the book, each one focusing on the three chapters in the trilogy.  In each part, author Daniel Wallace opens the curtains to let fans get a glimpse of the interior workings of Rocksteady.  Wallace gets the inside scoop on the making of the games direct from the source.  For Arkham Asylum that was Art Director David Hego who talks about the designs of the heroes and villains.  DC Comics worked hand-in-hand in the design including artists Jim Lee and Carlos D’Anda.  You’ll see their concept drawings side-by-side with the competed 3D renderings.  Equally important was the design of Arkham Asylum itself.  This section is filled with glorious, full-color paintings of the facility and its brooding, terrifying interiors.  You’ll also read about the game’s fighting system, programming, and reaction from play testers and fans.

Arkham City moved the game outside of the claustrophobic environment of the Asylum to give Batman (and players) and entire metropolitan area to explore.  Game Director Sefton Hill guides readers though the design of Gotham City, from its unique architecture to its transportation systems, and its many landmark buildings.  You’ll see how character designs were modified and Batman’s gear was upgraded and improved to face the many new challenges.

Next up is the latest entry in the series, Arkham Knight, the concluding part of the trilogy.  One again, it is Game Director Sefton Hill as our guide as Batman must face off against his most deadly foes in a Gotham City that has been thrown into chaos.  Gotham is brought to life like never before in the final installment.  Once again a multitude of new gadgets and vehicles were designed to utilize.

The book is jam packed with hundreds of color images that fully captures the incredible artistic and design detail that was needed to bring the dark world of Arkham Asylum and Gotham City to life.  I have reviewed a lot of these art design books over the years and while they are always gorgeous and feature stunning images, sometimes the content/page count is a little slight.  Not so here…this book clocks in at a stout 304 pages making it well worth the $40 cover price.