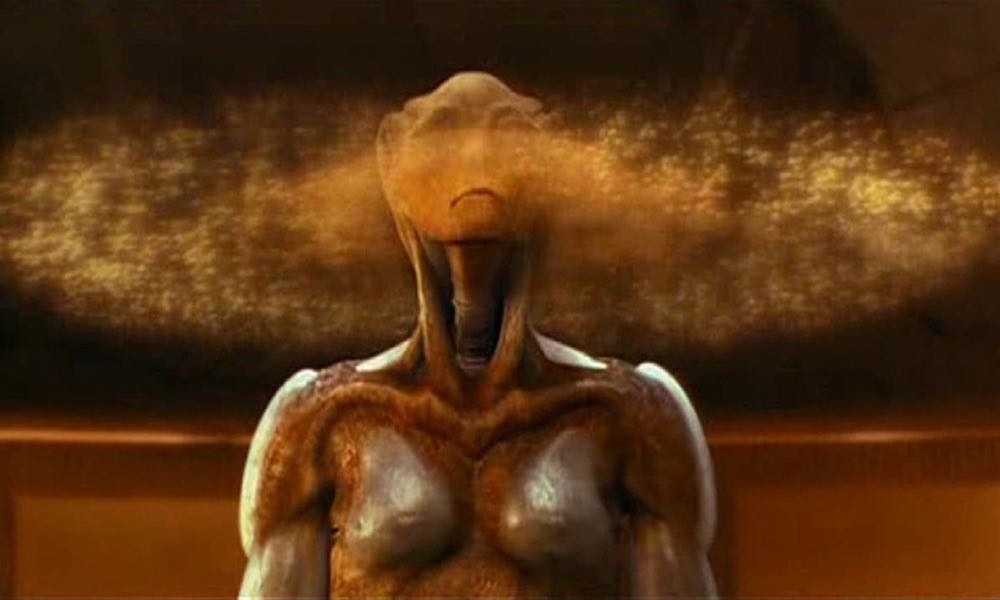 Charlie Sheen and Sci-Fi are two commodities you don’t often think of in the same sentence, and that makes The Arrival something of a rarity. The former brat pack bad boy has a pretty rich resume in a  career that is, for the most part, devoid of any genre productions. Sheen was a big deal once upon a time and has appeared in films including Platoon (1986), Wall Street (1987), Young Guns (1988), Eight Men Out (1988), Major League (1989), Hot Shots! (1991), and The Three Musketeers (1993).

Revisiting The Arrival the other night, I got reminded this is not a spectacular science fiction movie. This film got intentionally made to be the opposite of a blockbuster; It’s a quiet little film that came and went without much acclaim. It’s an alien invasion saga with some good ideas and memorable moments, primarily meant to serve as a vehicle for  Sheen and his acting talents.

After a compelling opening sequence, the film settles into becoming a mystery as  Charlie’s character radio astronomer Zane  Zaminsky obsesses on finding a radio signal and finding its source. As it continues, the film attempts to establish a somewhat manic pace. It soon becomes clear The Arrival has a goal to be as much a character portrait and psychological profile of Sheen’s paranoid and OCD character Zane Zaminsky as it is about the science fiction story it has to tell. Someone rolled the dice and made a conscious decision to make The Arrival a film designed to showcase Charlie’s talents as an actor as much as telling a pretty good science fiction story. The film spends most of its duration juggling these two elements; it almost worked out well.

Suppose you are not familiar with the title. In that case, The Arrival is a 1996 American-Mexican science fiction film written and directed by David Twohy, starring Charlie Sheen, and co-starring Lindsay Crouse, Ron Silver, Teri Polo, and Richard Schiff. Sheen stars as radio astronomer Zane Zaminsky who discovers intelligent alien life and quickly gets thrown into the middle of a conspiracy that turns his life upside down. The film also has a somewhat muddled message about climate change.

Charlie’s portrayal of the somewhat crazed Zane is nuanced and convincing, never going over the top. In a film that emphasizes the appeal of a quirky and memorable lead character, maybe a little over the top might be a good thing. The supporting cast does their job well.

Mystery stories where the protagonist’s sanity is uncertain even to themselves are as old as the hills, and this film’s narrative half tries to lead us down that path. Despite the audience seeing the same stuff Zane does, I realized the movie was half trying to get me to think Zane is crazy and had imagined the whole thing. It might work if you don’t pay attention.

The film’s mystery puts Zane in the role of detective in a plot that unfolds in the manner of an episode of Scooby-Doo, where those meddlesome kids in Mystery Incorporated are determined to uncover the truth, no matter what. Along the way, we learn more about Zane and his world.  We understand Zame is a pretty likable, knowledgeable guy, who is also super-stubborn,  and a smart-ass with a talent for innovation. We also learn he has a girlfriend who can barely tolerate his psychological issues but loves him all the same.

I suspect the film’s creators had to pay Charlie so much to appear in this production; that there was not enough left in the budget for special effects. The Arrival saves what little there is of its alien invasion stuff for the end of the film, concluding the most exciting part of the movie. It’s at this point the film unleashes its big Sci-Fi sets and CGI imagery.  We learn how the aliens are much more technologically advanced (of course) and their connection to climate change. It gets revealed they are changing our climate to make things hotter in advance of them moving in wholesale.

The Arrival does not represent any milestone or bar-setting accomplishment in the history of science fiction movies. It’s a modestly entertaining film that is more of a space oddity. Happy viewing.

One thought on “The Arrival (1996): It’s Charlie vs The Aliens In This Forgotten Gem”