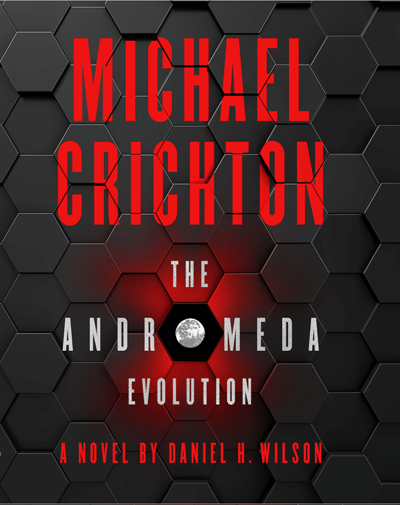 I have to admit that I really wanted to like this book—really. I had read the ANDROMEDA STRAIN when it first came out (yes, I am old) and loved it (the movie wasn’t bad either). With those memories in mind, the idea of a sequel some 50 years later had a lot of appeal to me—and so, I wanted to read this book and love it and the world it grew up in.

It’s not that the whole book stinks—the first third or so is wonderful, just like the original in form. In the second third, things begin to get lost, wiggle around, change…

By the final third, the book goes completely haywire.

Let me explain—THE ANDROMEDA EVOLUTION begins in the jungle with a hand-picked staff of scientific explorers especially picked to examine an anomaly—a mile-high tower deep in the Brazilian rain forest.
The group, composed of the usual crew of scientists and aided by the normal crew of hard-eyed adventurers, lands in helicopters (unapproved by the Brazilian government, of course) and begin the long, hard trek into the jungle.

That trek, while difficult, goes just fine—until they are attacked by a group of aboriginal ‘survivors’ who have been infected by ANDROMEDA. Everyone fights hard until, finally, there are two groups of dead guys—ours and theirs.

The scientists, out of touch with home base, decide that the best thing to do is move forward, taking with them the child who they have found in the woods—a child who tells them that the men were changed—turned black by something…

The scientists continue their trek and finally find it—the ANDROMEDA-built structure. It’s huge—nearly a mile high—and seems to have things inside.
Our boys decide to go have a look—and the book goes to pieces. The interior of the ANDROMEDA pyramid is loaded with stuff—none of which Crichton himself would have used.

Regardless, they carry on, losing a member along the way and discovering that the astronaut/scientist watching them is actually an enemy!

Now inside the earth, they follow the contours of what appears to be something as mundane as a generator room—and find themselves trapped by rising water…
The rising water is bad enough—but what happens next! Our heroes go into space! And destroy the remnants of the device the astronaut is building from there!

The world is safe—but the reader? Not so much.

THE ANDROMEDA EVOLUTION is one of those books—written (unlike the original) to cash in on the title. It will do well—the huge publicity campaign will see to that—but as a fan, someone who loved the original, I’m sorry to see it. Books like this (and the film that accompanied the original) should be cherished and re-watched, not cloned and exploited.

Too bad. Maybe this will teach someone a lesson—although I doubt it.