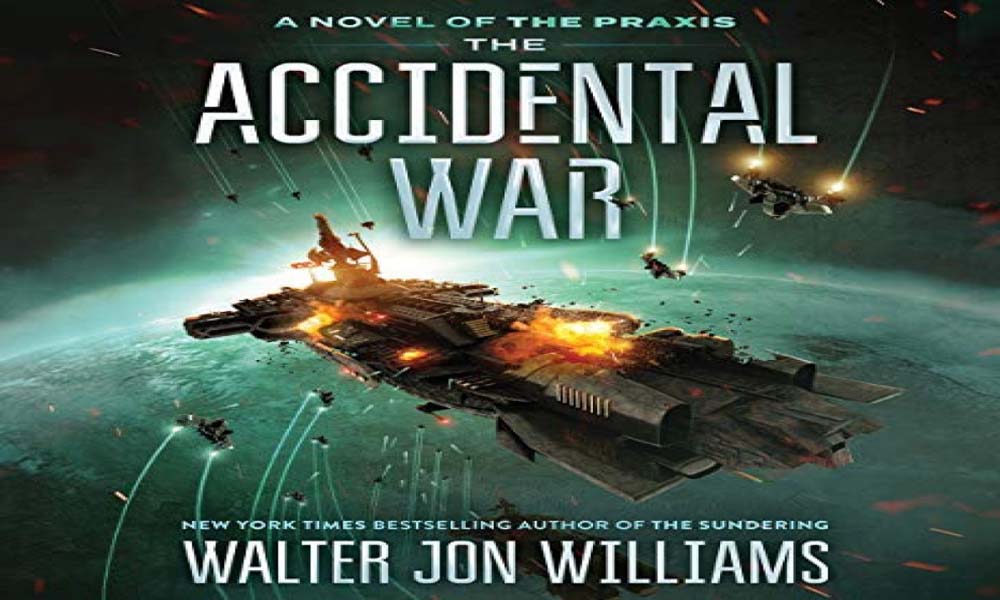 Walter Jon Williams is a very good writer. A writer who has been nominated for every major science fiction award known to man. 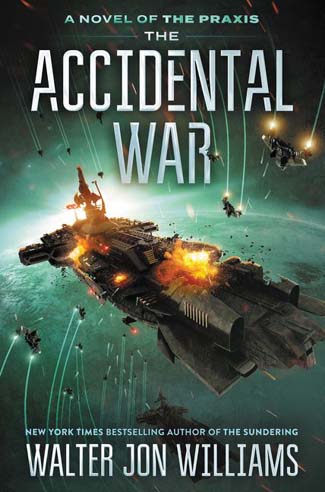 It is for that reason—and that reason only that I am writing this. Had the writer of this book been an unknown—a new writer—I would have quit reading in the first few pages and not done a review.

Why? You ask—simple, I’ve been reading SF for a very long time—since before most of you were born. When I started, there was a cliché that almost all SF readers disliked—it went like this. The story (novel or short, it made no difference) with ‘Lord Something or Other of Someplace or other looked out over the maroon lake that danced and twinkled under the turquoise sky. The arrival of Lt. Captain So and So interrupted his contemplation and forced him to return for the reason he had come out here into the wilderness of Planet Squizz…’

This sort of opening was a signal that the book was (amazingly enough) SCIENCE FICTION—and usually substandard SF at that.

THE ACCIDENTAL WAR has an opening very much like that—and it threw me off my stride for a bit. But the sharp writing and careful plotting soon made it clear that this wasn’t a substandard story—it was the work of a writer who knew what he was about and I allowed myself to slip into the world he wove around me—a world where Terrans live with other races under ‘The Prax’, a sort of compact developed by a race of aliens now gone. A great war between the people of the Praxis and another race has just ended and the people and government are trying to put together the pieces.

Helping are Lady Sula, a war hero with a past. She joins the legislature that runs the planet and soon finds out that there are members of the aristocracy who, having survived the war, are trying to avoid paying for their share of the expenses—after all, they’re above that sort of thing…

The leader of this faction, Lady Tu-Hon, searches for a way to avoid paying any taxes—when a Terran investor, working with a crooked bank manager, triggers a financial crash, she blames all Terrans for the disaster—and pushes the situation far enough that there is rioting in the street. The Terrans, many of them war heroes, are faced with a difficult choice—do they run? Or do they make war on those who were so recently their allies.
The books title gives you an idea of what their decision has to be.

This is a quick read, although it’s clear that it’s part of a series—we’re told all about the war just ended, but I’m sure there’s a book or two detailing it. The book ends with nothing really resolved—it might as well feature an advertisement for the next book in the series—a book, I’m happy to say, I would gladly read. Walter Jon Williams is a first-class writer—he characters are well conceived and well used and his plot forces you to keep turning pages.

If I were that kind of person, I would suggest that the book is a carefully disguised political treatise—with Terrans (all of whom seem to be from Texas and Hispanic) stand in for the illegal immigrants that are such a point of argument these days and the older, richer, aristocrats trying to take advantage of them the current administration.

I don’t think that’s the case—but it’s nice to read something that has the depth to be perceived as more than just a quick read.

THE ACCIDENTAL WAR by WALTER JON WILLIAMS—I highly recommend it!

One thought on “The Accidental War review”