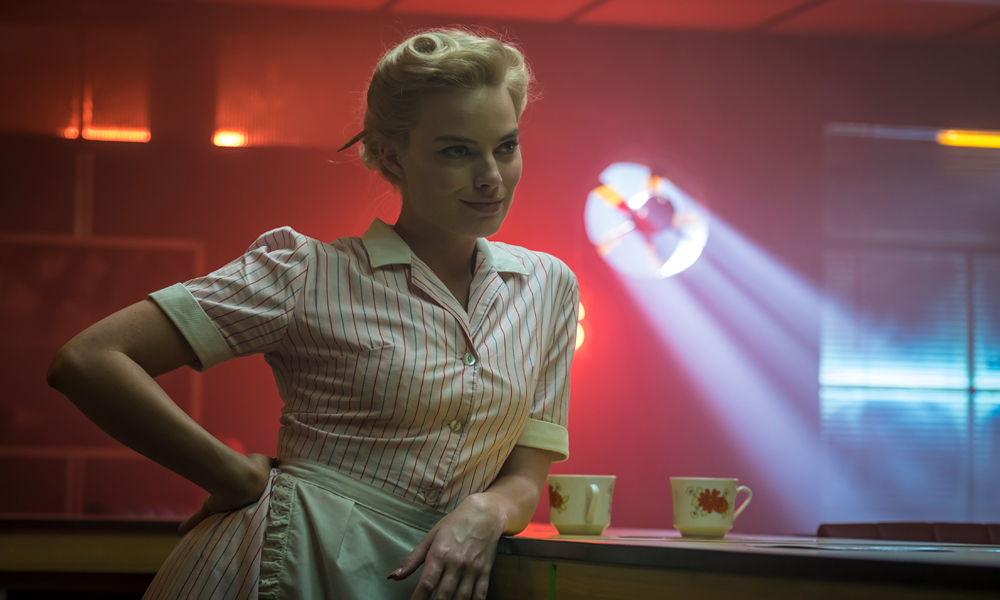 The feature writing/directing debut of ordinarily second unit director Vaughn Stein is a garish hyper-stylized neo-noir comparable to a very British and colorized answer to Frank Miller’s Sin City. Neon blares in the titular train station, everyone dresses in a timeless blend of period clothing, technology seems a few steps backwards from what could comfortably be called ‘modern’ which is fitting for a tale which is ostensibly an homage to classic gangster films complete with fast-talking wise guys, bantering waitresses, and dirty deeds in shadowy alleyways. Cinematic gimmickry is rife and the direction not so much a guiding force of the story as it is the main show. We’ve got cutaways to imagined scenarios somehow being witnessed by the people imagining them. We’ve got actors cast into silhouettes by ultra bright lights positions behind them. We’ve got closeups of moving mouths, dutch angels, very clear attempts to harken directly towards the progenitors of the films constantly being homaged, most notably Margot Robbie seated lit mostly by the burning cigarette in her hand which couldn’t be closer to a similar famous scene in Blade Runner unless the sequence had actually been directed by Ridley Scott.

That’s the main appeal but also stumbling block of this film: it feels like an affectionate tribute to other films without too many new ideas to add on top. Performances across the board (especially if you’re a fan of dry Brit wit) are stellar and compelling to the closing of the curtain, but if you’re a cinephile you may find yourself playing bingo with the genuflections towards other noir films, modern films, Alice and Wonderland (to a pervasive degree) and most bizarre of all a direct quotation not from any movie or book but instead from a trailer for the Tim Burton Alice and Wonderland adaptation. Given that the film appears to take place in some kind of alternate past, not a contemporary or future setting, and that the quotation made is not one in Tim Burton’s film but exclusively from it’s trailer the decision to open the film with this line of dialogue (however thematically appropriate) continues to baffle me.

Terminal is director as kid in candy shop. Famous actors give gravitas to the ludicrous scenarios, but there’s not a lot of attention paid to making the setting or story believable in the slightest. The full brunt of attention is given to making every frame as snazzy as possible and from the word go the audience is bombarded with bright primary colors everywhere, blinding lens flares, high contrast sets, rapid pace editing and never a scene lingering more than a few minutes without a speedy cut to something new. It’s practically tailor-made for a perceived contemporary audience despite the vintage sentiments of the costumes and trappings. There’s modern music, a cast of hot up-and-comers, an in-vogue emphasis on the war between the sexes and nihilistic undertones, breakneck speed, overwhelming exposition, and non-stop ironic cool.

At a certain point at least for me there was far too much explaining the intricacies of the twists and turns of the mystery plot which left the production feeling a little hollow. For all the great characters, complex backstories, and dreamlike locations the conclusion reveals all and the ultimate answer has surprisingly little connection to the main draw of the film: the style. What you’re left with is the appearance of an ongoing riddle which unravels too quickly. I’d guessed the identity of an important character by process of elimination long before their exposure and there is far too much dwelling on how clever Terminal thinks it is as opposed to any kind of earned shrewdness. There’s also an eventually infuriating obsession with squeezing the aforementioned Alice in Wonderland into every situation. Direct references to the book itself inspiring events is one thing, but having people point out similarities between occurrences in the story and the book near constantly, people quoting the book, and people taking names and identities from the book is just overkill.

That’s not to say there is no canniness to the film at all. The dialogue especially crackles sharply, there’s little touches of characterization that made the cast lively, and the bizarre city suspended between the past and present blended is unique. Margot Robbie is her usual infectiously madcap self, Simon Pegg is typically hilarious, and Mike Myers makes an uncharacteristic turn. Not one character seems to be aware of the anachronistic surroundings they inhabit and there’s no direct references to countries, time periods, or even people’s last names for the most part. I kept expecting a Dark City equivalent surprise. Some cliches are circumvented even if others are embraced lovingly. Your appreciation for the games the film plays may depend upon your acceptance of affectation, or you might simply enjoy the atmosphere, acting, and snappy patter beyond the payoff to all the convolutions.

It’s a gaudy, ostentatious, sleek, zippy, fog and cigarette smoke drenched escapist yarn all told which seems like all it set out to be. For a harsher critic the tributes pile on a little too thick and the conclusion is far more transparent than it seems to think but for a casual goer who prefer their features vibrant, quirky, and breezy it’s not a bad time, especially if you’re an enormous fan of the works of Lewis Carroll. Or you just want to see Margot Robbie delivering the perfect performance of Harley Quinn she really should have in a certain other by now infamous film.

Apply to this station if you like your noir jazzy, your crew motley, and your tone idiosyncratic.