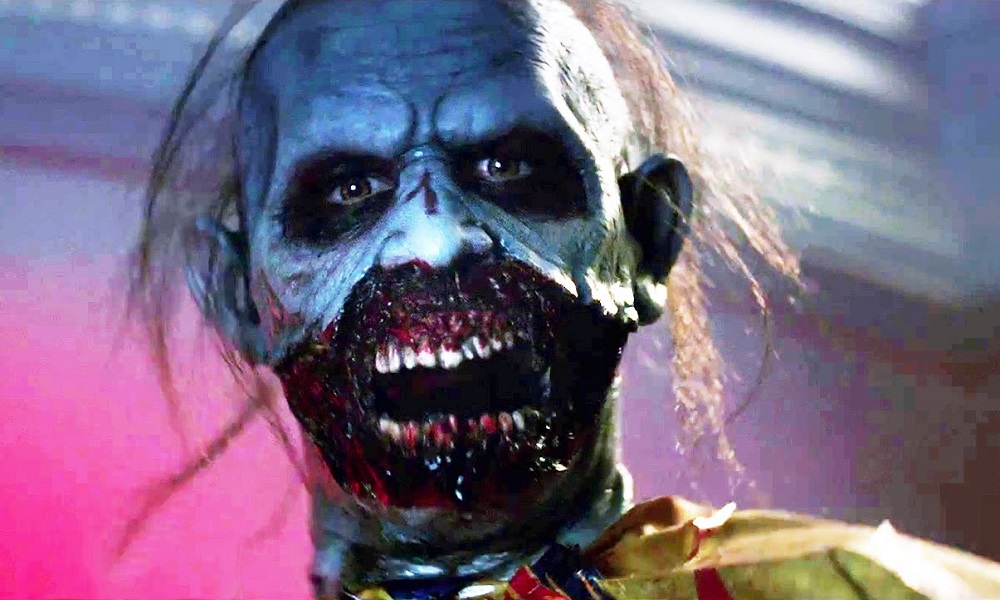 One of the best recent Halloween films was 2007’s Trick ‘r Treat, a fabulous anthology film that featured several short episodes that were tied together by an over-arching story. Tales of Halloween is in the same vein and features ten short films. While they are not interlocked together as neatly as in Trick ‘r Treat, the films do feature an overall narrative and many of the same characters pop up in the films which detail a night of Halloween hijinks, horror, demons, and aliens. 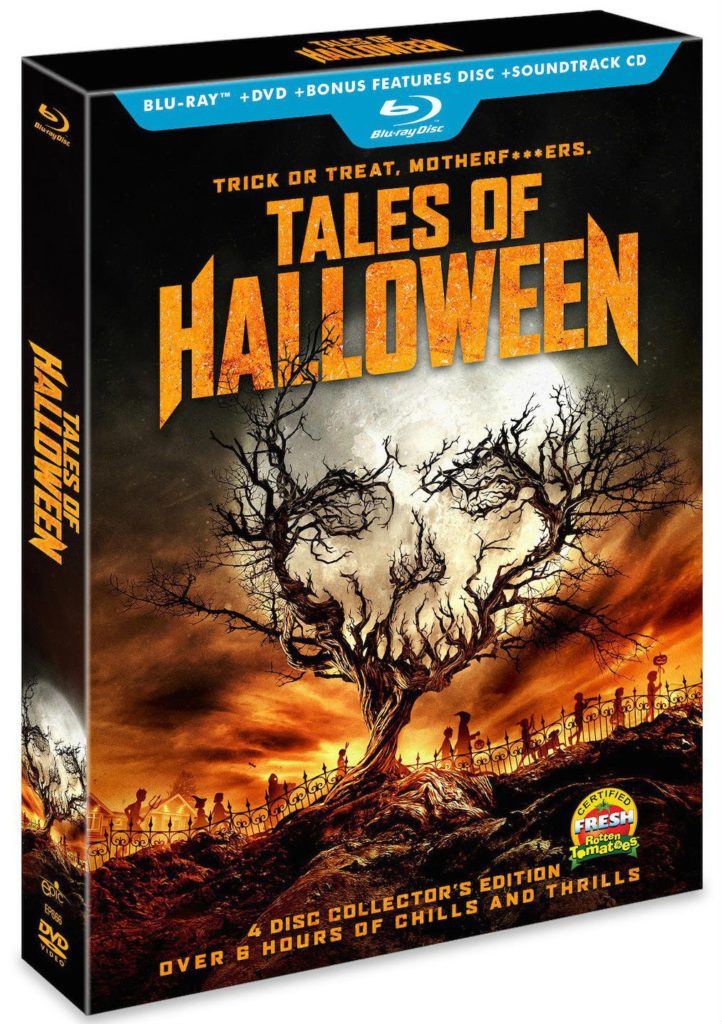 The film is set in an unnamed American, middleclass suburb and each segment is introduced is narrated by Adrienne Barbeau playing a local radio host in a sendup of her character from “The Fog” many years earlier. There is an edge of humor to all of the films and thus it isn’t as patently terrifying as Trick ‘r Treat. The stories are written and directed by a diverse group of filmmakers and feature a cast and cameo appearances by such luminaries as Barry Bostwick, Lin Shaye, Greg Grunberg, Joe Dante, John Landis, and Drew Struzan.

Below is a quick synopsis of the ten films:

Sweet Tooth – A teenage babysitter and her boyfriend pay the price for eating all of her charge’s candy. Written and directed by Dave Parker.

The Night Billy Raised Hell – A young boy is about to egg an old man’s house. The man turns out to be The Devil himself and teaches the young boy a lesson. Written by Clint Sears, directed by Darren Lynn Bousman.

Trick – A group of friends are terrorized by vigilante trick-or-treaters. Written by Greg Commons, directed by Adam Gierasch.

The Weak and the Wicked – A young man summons a Demon to exact vengeance on 3 bullies who burned down his home along with his parents in it. Written by Molly Millions, directed by Paul Solet.

Grim Grinning Ghost – A young woman (Alex Essoe) is haunted by a malevolent spirit. Written and directed by Axelle Carolyn.

Ding Dong – A man learns that his wife is a child hungry Witch and tries to put a stop to her. Written and directed by Lucky McKee.

This Means War – A man battles his new neighbor to the death for the best Halloween decorations on the block. Written and directed by Andrew Kasch and John Skipp.

Friday the 31st – A deformed Serial killer meets his match when a trick or treating extraterrestrial gets upset when he doesn’t have any candy. Written by Mike Mendez and Dave Parker, directed by Mike Mendez.

The Ransom of Rusty Rex – Two bank robbers kidnap a wealthy man’s son only to discover that the child is a deformed creature that doesn’t ever want to leave anyone’s side. Written and directed by Ryan Schifrin.

Bad Seed – A detective tries to put a stop to a genetically engineered man eating pumpkin that’s terrorizing the town. Written and directed by Neil Marshall.

Out of these the best were “The Ransom of Rusty Rex”; “This Means War’; “Friday the 31st”; and “the Night Billy Raised Hell”.

“The Grim Grinning Ghost” was the most disappointing of the group as it was the one that was full horror and featured Lin Shaye but it ended far too abruptly to be effective. Other than that, none of them were bad but none truly stood out. I’m not sure if you want the best segments of your horror anthology to be the ones that were the funniest but that is definitely the case here.

Now, on the other hand, this is a four disc set that is absolutely packed! The feature film is included on both blu-ray and DVD, there is a CD of the film’s soundtrack but the biggest bonus is the fourth disc that is loaded with bonus features. There are seven additional short films that total another full hour of viewing time which I presume were cut to keep the main feature at around 90 minutes. Other extras include:

Tales of Halloween didn’t focus on horror as much as you would probably like but there’s a lot of good fun here and hopefully this will be an annual or semi-annual release.