I still remember it as if it were yesterday. A friend of mine asked me to go see Tales from the Hood at the dollar theater. It was at the end of the summer and we had already witnessed Batman Forever, Congo, and of course Judge Dredd. Yeah… it was not a great summer. I forked over my two dollars and went in with no expectations. Which is the best way to see any movie really, I was thoroughly entertained and left wanting more from this oddball horror film that was Tales from the Hood. See, there aren’t nearly enough horror anthology films out there and thankfully this one is coming back with a new Blu-ray from the horror masters at Scream Factory.

I still remember it as if it were yesterday. A friend of mine asked me to go see Tales from the Hood at the two dollar theater. It was at the end of the summer and we had already witnessed Batman Forever, Congo, and of course Judge Dredd. Yeah… it was not a great summer. I forked over my two dollars and went in with no expectations, which is the best way to see any movie really. I was thoroughly entertained and left wanting more from this oddball horror film that was Tales from the Hood. See, there aren’t nearly enough horror anthology films out there and thankfully this one is coming back with a new Blu-ray from the horror masters at Scream Factory.

At the time, I had little appreciation for the horror anthology film. I was all of twenty and outside of seeing both Creepshow films and Cat’s Eye, I hadn’t found one that really thrilled me in the same ways. Now with a lot more movies under my belt, I thought I would take a shot at Tales from the Hood again. I was not disappointed. Yet it wasn’t so much the horror but the social commentary that really propelled me back to the nineties. 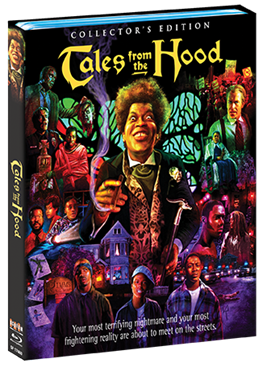 As per the usual with a Shout! Factory Scream Factory title, the special features are above and beyond any previous release. The picture quality was terrific and to say the very least, it was incredible to finally have this title in a digital format. Let’s get into the tales, shall we?

Tales from the Hood opens with three gangbangers arriving a funeral parlor to conduct a drug deal with the mortician, Mr. Simms (Clarence Williams III). Simms is our host through his parlor of recently deceased patrons and each is a tale more horrific than the last. The gangbangers simply want their “shit” (the drugs) and to be on their way, but Simms has yarns to spin, and reluctantly these flies keep getting closer to Simms’ web.

Before we get into each tale it is always fascinating to me how anthologies are laid out. You have to grab the audience with the first tale and truly send them out on a high note in the end. The middle stories are usually the weakest of the lot. However, I didn’t then, nor do I now, feel that way about what transpires in the middle acts of Tales from the Hood. They are solid horror tales that could have easily opened the film. Could they have close it out though? Nope, the film ends on a perfect note.

Rogue Cop Revelation
The first story was an instant reminder of the movies that populated nineties cinema that usually featured dirty cops. What we have here are three white cops who torture and murder a local politician, Martin Moorehouse (Tom Wright), who is trying to put away corrupt police officers. Clarence (Anthony Griffith), a rookie on the force, fails to stop them and becomes haunted by the guilt of what happened that night. Haunted to the point where he thinks graffiti done in tribute to Moorehouse is pushing him to revenge, he decides to take matters into his own hands. One year later a disgraced Clarence brings three dirty cops to Moorehouse’s grave for justice. The tale gets dark and weird with Moorehouse becoming a telekinetic zombie out for vengeance. However, the comeuppance is not limited to the three cops and ends in a truly horrific twist. I was thrilled to learn in the special features that writer/ director Rusty Cundieff was inspired by a certain episode of Night Gallery because that is exactly what I thought inspired the ending.

Boys Do Get Bruised

This one has a strange twist on it which is all in the casting. David Alan Grier, who was better known for comedies in the nineties, plays an abusive father named Carl. The kicker to this story is that his son, Walter (Brandon Hammond), truly believes him to be a monster. In placing this story in the medium of film, the director can really play with what we see on screen. It works in a tale that is a modern Twilight Zone from start to finish. It is sad that the many reincarnations of the Twilight Zone were not as socially conscious as this segment from Tales from the Hood.

This story is a bit of a red herring because it does not actually feature a body in Simm’s funeral home, but the cause of the lead character’s demise is present. What genre fans and practical effects fans will love here is the use of pre-CGI effects that entail stop-motion and puppetry. Every anthology should feature some sort of toy/ puppet and “KKK Comeuppance” delivers. Corbin Bernsen’ s Duke Metger is truly despicable and sadly still the type of politician we deal with to this day (22 years later). In a lot of ways, Bernsen’s performance is a one-man show and he sells it over and over again as he battles the forces of vengeance.

I said this was the “A Clockwork Orange” segment back in 1995 and was pleased with myself to learn that is what writers Rusty Cundieff and Darin Scott cited as their first inspiration for the final tale. Both writers reveal in the special features that numerous young inner city youths said this tale really spoke to them and made them see exactly what they were doing to their own people. That alone reminds us of the power of storytelling. This one goes really dark and Rosalind Cash really elevates all the performances here. 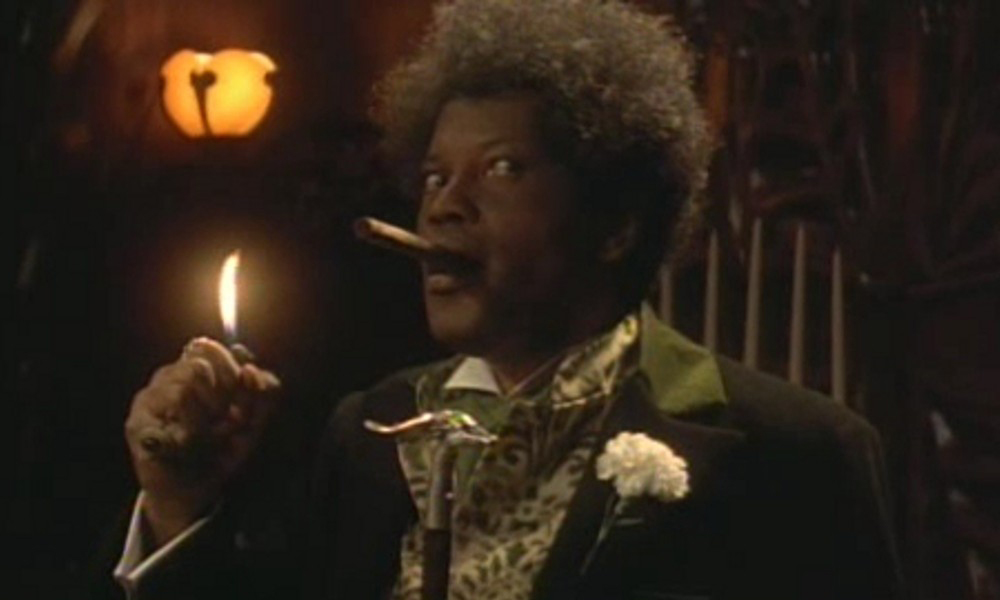 The film bookends with the gangbangers and Mr. Simms. It is a tad over the top with the special effects, one of which is very dated, but by this point, you have already had a great time so you won’t care. Tales from the Hood has never really been forgotten by genre enthusiasts because it was very different for its time. Now with this fantastic new release, a whole new generation will discover what those of us from 1995 know, “it’s da shit”.

Tales from the Hood Bonus Features