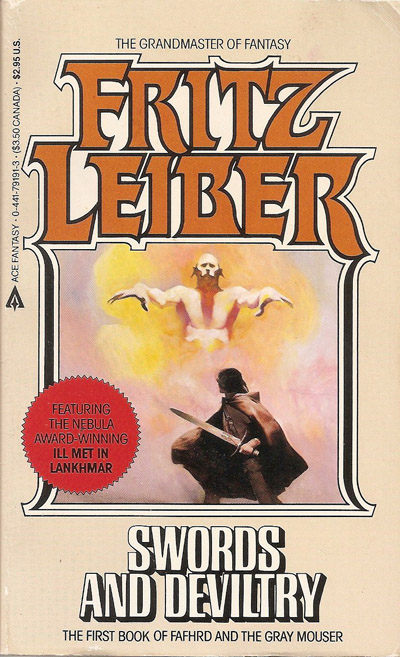 Swords and Deviltry is the first of seven books in the swords & sorcery/fantasy series featuring Fritz Leiber’s pair or roguish adventurers Fafhrd, the giant northern barbarian warrior, and the Gray Mouser, the diminutive thief and wizard. While it is chronologically is the first of the pair’s adventures, the three stories contained in the volume were written many years after their creation in the 1930’s. Leiber wrote these three stories essentially as origins of the two characters as well as detailing their very first meeting.

“The Snow Women” published in 1970, introduced Fafhrd, a member of the Snow Clan who lives in the northern Cold Waste. The young 18 year-old barbarian finds himself in an arranged marriage with a girl from his clan but falls in love with an actress and runs off with her to explore the southern kingdom.

“The Unholy Grail” published in 1962, introduces us to Mouse, a young apprentice to the wizard Glavas Rho who secretly practices magic in a kingdom where magic is outlawed. Mouse is sent on a quest to find a talisman for his master but returns home to find Glavas Rho dead and their house in the forest destroyed by Duke Janarrl. Mouse discovers that the Duke’s daughter Ivrian was secretly studying with Rho and holds her responsible for his master’s murder. With the aid of black magic, Mouse enacts his revenge on the Duke. He and Irvian, who he has now fallen in love with, escape and make their own path to the southern realms.

“Ill Met in Lankhmar” written in 1970, won both the Hugo and Nebula awards for best Novella. Fafhrd and the Gray Mouser find themselves, along with their loves in the fabled city of Lankhmar, the largest and most notorious city in the world of Newhon. The city is home to a vast and powerful Thieves’ Guild and anyone practicing thievery without being a member does so under penalty of death.

Fafhrd and Mouser meet for the first time when they independently decide to ambush a pair of thieves who have just made off with a haul of jewels from a gem merchant. The pair decide to split the loot and soon find themselves introducing their significant others and drinking away the night. However, a great tragedy is about to befell the pair which brings them into the cross-hairs of the Thieves’ Guild and their powerful sorcerer, Hristomilo.

Swords and Deviltry serves the purpose for what is created. Although it wasn’t needed, it does provide a backstory for the pair of adventurers which Leiber had not felt the need to create in the twenty plus years of their existence. One gets the feeling that these were written more out of necessity than inspiration.

“Ill Met in Lankhmar” is definitely the best of the three stories although it’s probably not as good as its reputation as an award winner. To be honest, Leiber wrote many better stories about the pair than this one as I will cover in reviews of the other volumes.

Leiber was a master wordsmith and his ability to create a setting and a mood is second to no one. Swords & Deviltry, while not being Leiber’s best work, still serves as the introduction to this lovable pair or rogues who fought, thieved, drank, and caroused their way into our hearts through fifty years of adventures.