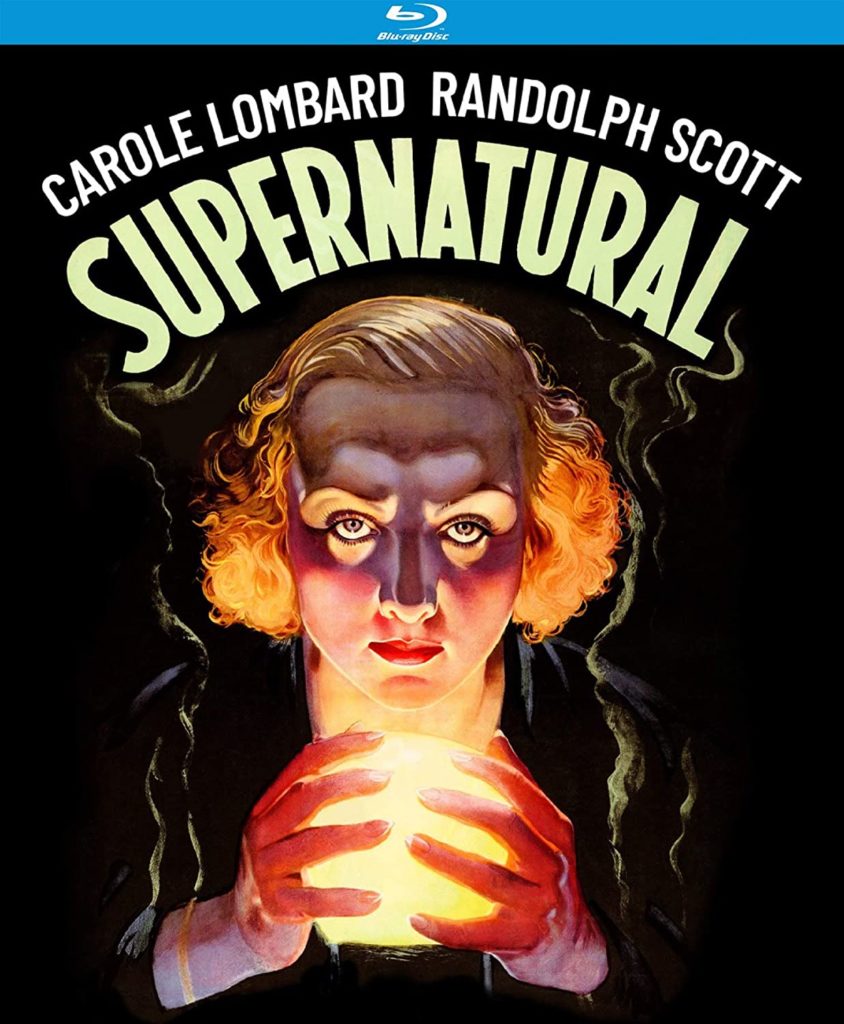 I was surprised when this blu-ray arrived in the mail. Surprised because even though I am a huge fan of horror films from the Golden Age of the 1930’s and 1940’s, somehow, I had never heard of this film. This is why Kino Lorber is so wonderful. They have an incredible ability to find these forgotten gems of the past and give them new life.

The instantly attractive element of Supernatural are its two stars: Carole Lombard and Randolph Scott. Lombard, one the top box office draws of the 1930s, is best known for her lighter roles in many screwball and romantic comedies. Randolph Scott was perhaps the top Western film star not named John Wayne. This eclectic pair find themselves in this melodramatic horror film which was directed by Victor Halperin. A year earlier Halperin had directed one of the great horror films of the 30s, White Zombie, starring Bela Lugosi.

In another unusual departure the film features a female in the role as the antagonist, and a particularly malicious one at that! In New York City, Ruth Rogen is on death row for murdering three of her former lovers. Dr. Houston believes that the spirit of an evil person can possess the bodies of the living to carry out more acts of murder and is allowed to claim Ruth’s body after her execution.

Lombard plays Roma Courney, a wealthy heiress who stands to inherit the entire family fortune after the death of her brother. A con-man spiritualist named Paul Bavian (who was another of Ruth’s former lovers) sets his sights on Roma and her money and sets up a séance where he claims he can talk to her deceased brother. However, the spirit of Ruth Rogen enters the body of Roma intending to continue her murderous rampage.

While a lot of the Golden Age horror films were centered on monsters like Dracula, the Mummy, and the Frankenstein Monster, Supernatural concentrated on both malevolent and benevolent spirits. It has all the trappings of 30’s era films including the fake spiritualist who fools people with parlor tricks but gets more than he bargained for.

There’s no question that both Lombard and Scott (who plays Roma’s fiancée) are out of their element in a horror film. However, with a scant run time of just 65 minutes the film breezes by and doesn’t get too bogged down with the characters. Vivienne Osborne is particularly delicious as the murderous Ruth Rogen. She counts down the days to her execution with little if any remorse. She displays a sexual aggression rarely seen in those days of the Pre-code horror films.

Supernatural is more of an oddity than anything else. Two stars known for other types of roles; a female villain potent with sexual energy, and a brisk pace that doesn’t allow its flaws in story to upset the balance.