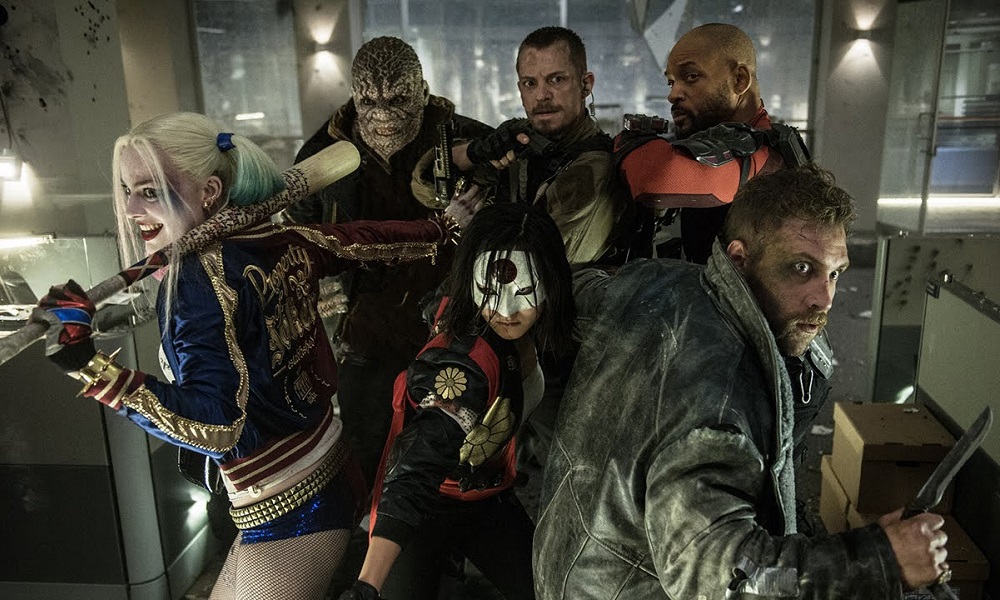 A colleague of mine noted after our screening of Suicide Squad that this should be the seventh or eighth movie in the fitfully evolving DC movie universe, not the third. That Warners decided to plop an obvious outlier into a franchise still in the midst of defining itself is the most curious thing about this movie. It makes an odd kind of sense when looking at the bigger picture, but again: they’re trying to do too much too fast and the movies are suffering for it.  The concept and core characters of Suicide Squad can be great fun – fun this movie admittedly finds from time to time – but that can’t stand up to a lot of hasty justification or wandering attention spans.

And sadly, that’s exactly what it gets: an ambling ADHD movie that knows what it’s supposed to say, but can’t find the spirit or energy to say it convincingly. Dogged by excessive exposition, a messy story and some serious miscalculations with significant characters, it avoids the kind of white-hot rage generated by BvS, but remains a dumb action movie at the best of times. The characters, and the scenario, deserve much better.

For the uninitiated, the premise of Suicide Squad is delightfully twisty. With the death of Superman at the end of BvS, villainy has been running rampant. But there’s gradients of villainy after all, and “I want to break into that bank and take all the money” stands higher on the ethics scale than “I want to plunge the universe into unending darkness.” So when said darkness-unleashers take advantage of the world’s Man of Steel-less status, government agent Amanda Waller (Viola Davis) hatches a scheme: plant explosives in the necks of a group of incarcerated supervillains, throw them at an impossible problem, and see if they can pull out a win.

It’s a neat concept, and in other areas, it’s proven mightily entertaining (check out the DC animated feature Assault on Arkham to see it done right). The trouble is that – because this universe is just getting going – we haven’t had time to see any of the villains on this crew act like, you know, villains. We start out with them in their cells, receive a few shotgun blasts of backstory, then set them loose with the implicit understanding that, yes, they’re usually on the other side, and yes, they’re being forced into this.

But you need more than an implicit understanding and Will Smith (who plays DC’s resident killer-for-hire Deadshot) repeating “we’re the bad guys” every few minutes for that to work. The groundwork needs to be laid more firmly than that. As a counterpoint, look at Loki in Thor: The Dark World, tasked with a similar “do it or else” mission after languishing in prison. It works there because we’ve seen him being a flat-out villain in two previous films. Had Suicide Squad arrived after, say, a Batman vs. Deadshot movie, or Captain Boomerang (Jai Courtney, having a blast) duking it out with The Flash for two hours, everything might have clicked. But now? It feels like a party that got started without us and can barely be bothered to get us up to speed.

Much has been made of Harley Quinn (Margot Robbie) and her squeeze The Joker (Jared Leto), who occupy a strange place in the middle of all of this. The focus remains on Harley, which makes for a refreshing reversal, and Robbie absolutely crushes it. But her trashy outfit and periodic objectification sit extremely poorly, and undo a lot of the terrific work the actress does to bring one of comic-dom’s most beloved bad girls to life.

The Joker presents an entirely different issue. Leto is a fantastic actor and from a purely technical perspective, he finds the right sense of menace for the part. But he can’t find the character. Mark Hamill, Heath Ledger, Jack Nicholson, Cesar Romero… all of them brought their own spin to the role and yet all of them were indisputably the Joker. Leto isn’t. He’s a gang-banger with green hair who laughs while he kills people. The actor has the chops but the script just doesn’t give him the right tools to work with.

Furthermore, Suicide Squad reveals an inescapable truth about the character: he plays second fiddle to no one. His status here as a sideshow reminds us how all-encompassing he can (and should) be, how much attention his infernal charisma demands, and how putting him on the undercard does a grave disservice not only to him but to the characters we’re supposed to be paying attention to instead.

These are significant flaws and Suicide Squad ultimately just can’t overcome them. Even if it had, it would still have to deal with a jumble of a story that goes in a thousand directions at once, and too many routine twists and turns to give us anything to hold onto.

That said, director David Ayer possesses the kind of grindhouse energy one needs for a late-summer action picture, and once the mayhem starts in earnest, there’s a fair amount of low-rent fun to be had just watching it all unfold. Suicide Squad also deserves credit for lightening up a little bit after the merciless grimdark of BvS. Comic book fans will find moments to treasure here and there as well. Ben Affleck’s Batman makes a welcome cameo, showing us how much potential he has to really give us something special with the Dark Knight if Warners will only let him. (Seriously, “it wasn’t the cast’s fault” should be the epithet on the DC movie universe’s tombstone.) Robbie is a star on the rise for good reason, and Smith will always be Smith… justifying yet again his status as a perennial headliner. Compared to the almost inconceivable creative failure of BvS, the fitfully entertaining mess here is almost welcome.

But a mess it remains and the problems revealed in the DC movie universe’s earlier films show no signs of going away. Warners simply doesn’t love these characters the way it needs to: pantomiming what they think the fans want instead of truly sharing that love. Like its scruffy protagonists, Suicide Squad moves boldly into the darkness, hoping to find some connections to cling to. Unlike them, it never finds the energy it needs to succeed.