Strange Ink is an enjoyable urban fantasy that explores the obsession of using tattoos as memory keepers and exacting justice. Harry Hendrick is a journalist who tried to expose a corrupt company and was burned at the stake when his proof went missing. The event ruined his career before it got started, and put him in a second-class local newspaper where the trivial stories he reported couldn’t harm anyone. 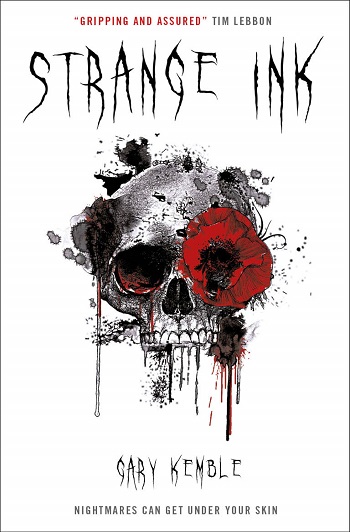 Harry finds himself wrapped up in a story of revenge from the grave when he moves into a new house. He begins to have vivid dreams that manifest as mysterious tattoos on his skin the next day. The unusual haunting leads him to a face-off with ex-military gurus and the company who ruined his budding career. Kemble’s book is a unique piece where the foreshadowing is subtle and no mystery is left unanswered.

Harry and his ghost, who refuses to be ignored, are strong characters with all the classic wants and needs that believable characters must have. While most of the secondary characters are fluid within the tale, there are a few that fall on the wayside that shouldn’t. The most important one is Jess. She comes in late in the narrative and because of this Kemble rushes her development. She takes the reader off-guard by knowing who Harry is before he has a chance to identify himself first, and then trusting him without any conflict or caution.

Harry’s best friend, Dave, is supposed to be incredibly concerned for Harry. At one point, Dave starts making comments that suggest he’s worried that Harry is suicidal and pleads with Harry to stay with him for a while. After these declarations, however, Dave disappears from the page and only resurfaces when Harry needs something. Since these characters lack the depth that they need to fulfill the purpose that Kemble has set for them, they appear as an author’s tool instead of characters who are integral to the storyline.

In saying that, the timeframe in which this story occurs is a few weeks. With such a short timeline, it does make sense as to why secondary characters, like Dave, fade into the background. However, the reader shouldn’t begin to wonder why a character hasn’t resurfaced and why they are part of the story.

This book’s best quality is the fluid way the story unfolds. The visions that accompany the tattoos are gripping, and they haunt the reader in the same way they haunt Harry. The splits in the narration between the life of a man in the military and the life of a humiliated journalist, are equally enjoyable—as they should be. The switch doesn’t take the reader a minute to get into; instead there’s an anticipation to see what that part of the story will tell you. Not all POV switches, especially those associated with different timeframes as well as setting, are so smooth.

The emergence of Kemble’s talent is an entertaining addition to the urban fantasy genre.