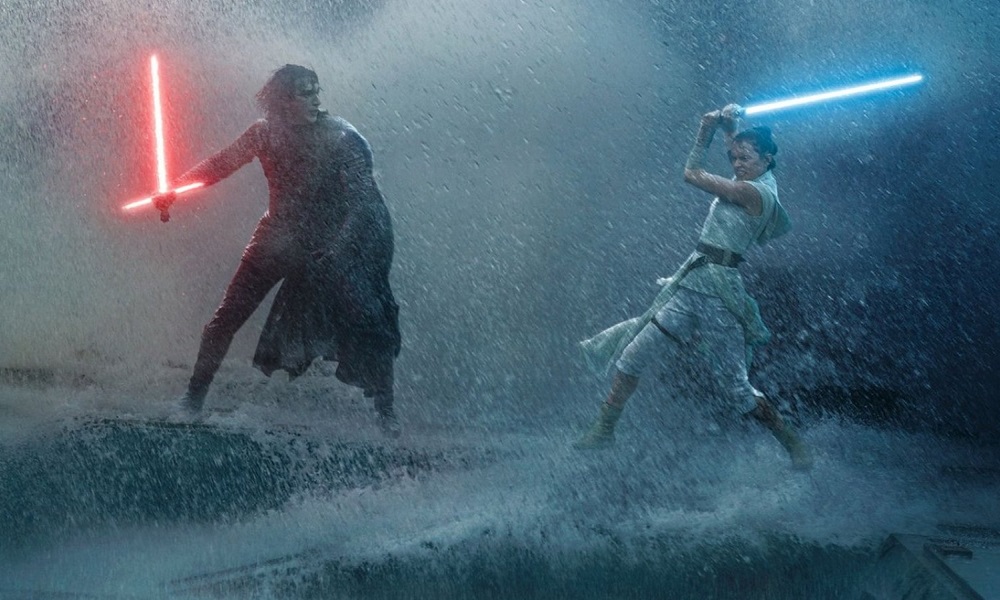 The Rise of Skywalker is far from the end of Star Wars – money won’t print itself – and yet its status as the anchor to the “core 9” gives it a finality we haven’t felt since Return of the Jedi. This is the end, for better or worse, of the Skywalker saga, and whatever comes next will always feel like elaboration.

To that, we can add the toxic fan squabbles over Rian Johnson’s The Last Jedi, as self-proclaimed defenders of all things Star Wars take sides, lay claims, and generally pronounce anything they disagree with as the ruination of the saga. The return of JJ Abrams to the director’s chair further exacerbates that tension – sacrificing boldness for dependability – and fans of The Last Jedi are apt to bristle a bit at The Rise of Skywalker’s shift away from Johnson’s game-changing implications and towards the safer pleasures of Abrams’ The Force Awakens.

For the record, I’m a fan of both (and a resolute prequel defender, so take that as you wish). The Rise of Skywalker benefits immeasurably from a deep breath and a reminder that these films are supposed to be fun first and foremost. The Rise of Skywalker is tons of fun, if excessively rushed at times and containing a few too many ancillary characters for comfort. And while it lacks Johnson’s resolute willingness to push the boundaries, neither does it skimp on the simpler yet wholly satisfying pleasures that Abrams can bring.

That starts with lingering questions from The Last Jedi, the kind that Star Wars has always thrived on. What happened to the parents of plucky Jedi-in-training Rey (Daisy Ridley)? How is she connected to patricidal Sith Lord Kylo Ren (Adam Driver)?  How has Palpatine (Iam McDiarmid) returned, and what has he been up to since Darth Vader chucked him down the Death Star shaft like so much dirty laundry?

Revealing the specifics means spoilers galore, but Abrams handles their presentation with suitable care. While none of the answers are shocking, most make a reasonable amount of sense and carry the kind of symmetry required for a movie of this level. They work, they deliver their share of surprises, and while they lack Johnson’s death-defying hairpins, they possess enough creativity and dramatic weight to elicit the prescribed reaction.

That’s fortunate because The Rise of Skywalker scuffles more than it should during the first act. Exposition comes fast and furious, with a lot more complexity than it needs and some frantic hand-waving to skip over some very rough logistical ground. The characters need to be at certain places at certain times, and Abrams is often more concerned with getting them there than doing so in a way that makes much logical sense. (There’s a ticking clock, among other things, and the timetable involved stretches even the most generous sense of credulity.)

He indulges in nostalgia far more often than he should too, with call backs to earlier films that tread uncomfortably close to rehash, and a few more cameos than necessary. They’re handled with the same care as the rest of the movie, but besides linking The Rise of Skywalker more closely to Episodes IV-VI, they speak more to fan service than any dramatic need in and of themselves. The same holds true for a number of new characters, here largely just to sell toys (do we really need another cute droid, JJ?), and with figures like Kelly Marie Tranh’s wonderful Rose more or less on the sidelines, one wonders why the screenwriters couldn’t just work with who they had rather than squeezing eleventh-hour figures in to an already crowded production.

And yet despite that, none of these touches are fatal. The new cast members have fun, the worlds we visit are full of awe and wonder, and Abrams’ sense of the most humor helps bring the effervescent soul of the series to light just when it needs a little spark.

And again, fun is the name of the game. The Rise of Skywalker soars whenever it sets aside the lugubrious demands of event filmmaking and just kicks some stormtrooper butt. Abrams excels at imaginative action scenes – going all the way back to his Alias days – and Star Wars provides the perfect setting to let him go nuts. He keeps the fights and chases grounded in character, and never loses sight of the stakes involved in his various bits of mayhem. This pays the biggest dividends in the lightsaber duels, as Rey and Kylo’s love-hate tango moves towards the long-anticipated endgame, but extends to any moment when a beloved good guy has to step up and start blasting.

Which brings us to the cast, which has always ben an ace in the hole for Star Wars and doesn’t disappoint here. Ridley finds the perfect tone for Rey’s defiance, doubt and moral questioning, while John Boyega and Oscar Isaac make a meal out of their off-again, on-again bromance as ex-stormtrooper Finn and hotshot X-wing pilot Poe. On the other side of the divide, there’s Driver: different enough from previous villains in the saga without losing the rage, entitlement and quiet questioning of his own that marked his character’s infamous grandfather.

They set the pace for an eclectic combination of figures old and new, all of whom take eager advantage of their curtain. The most striking, of course, is Leia (Carrie Fisher) courtesy of some heavy CGI following the actress’s untimely death, yet effectively carrying the torch for the original heroes of Episode IV. Billy Dee Williams dutifully flashes his pearly whites as Lando Calrissian, and McDiarmid tucks into the saga’s ultimate villain with expected relish… but of all the classic figures onscreen, it’s C-3P0 who emerges with the best of it. Anthony Daniels has quietly become one of the saga’s north stars, and his turn here might be the high point of a career defined by his beloved golden fusspot.

Abrams is strong enough to hit the beats when he needs to and tie it all in to the eight previous films with a reasonable flourish. That makes for quality popcorn – the kind of movie every Star Wars fan expects and demands – and if it doesn’t push the envelope the way its predecessor did, it emerges none the worse the wear for it. It’s been 42 years since George Lucas’s weird little sci-fi flick turned the world on its ear. The Rise of Skywalker is more interested in bringing that journey to a solid close than reinventing the wheel. There will be more movies, more TV, more toys and games and anything they can slap a label on and sell. But for now, it’s more than enough to look back at the journey and revel in the wild ride… thanks to a movie that approaches the task with the seriousness it deserves.

2 thought on “Star Wars: The Rise of Skywalker — Movie Review”