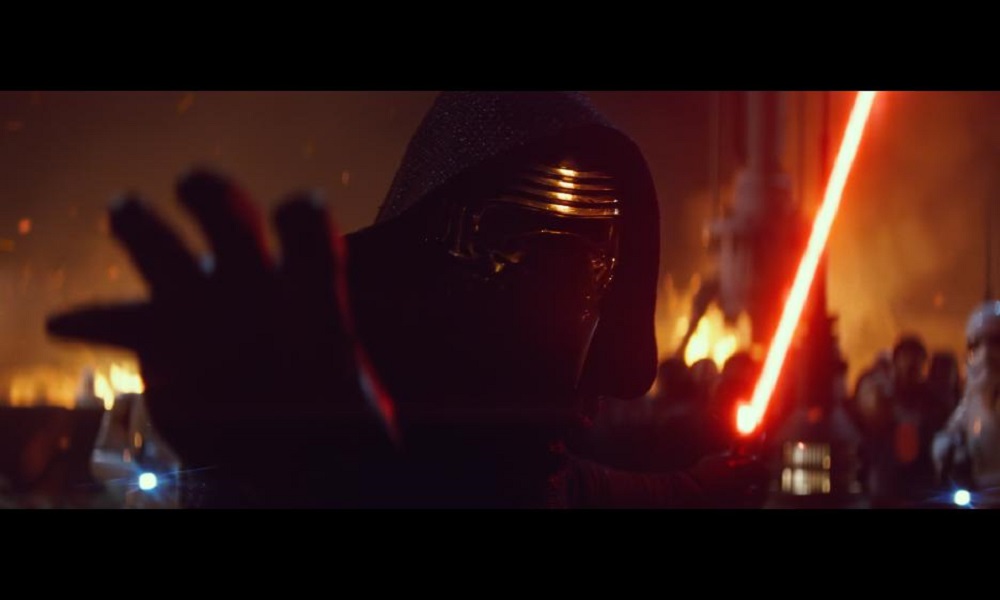 We’re going to skip any and all mentions of the plot here, since we’ve collectively agreed — as a species — that spoilers are a stoning offense, and my life is complicated enough without drawing an Internet lynch mob down on it. So forgive me if I’m a little cryptic at points. And indeed, that collective demand to let the mystery be represents something extraordinary in this day and age, when every step of every movie is spelled out in advance, and anticipation of what it might be has replaced enjoyment of what it actually is. We’d thought we’d lost that trust forever: when even the great films needed to be spelled out for us before we risked the price of a ticket. That’s the magic of Star Wars, making us believe even when we have every reason not to.

And there’s a lot to believe in here, though it’s not perfect and it helps to love it with your heart more than your head. Its strong point, I think, is that it restores that sense of wonder that the prequels destroyed in too many people: the mythic elegance that made us all fans in the first place and which comes roaring back here just like it did in 1977. That’s strong enough on its own to get the film past its weak points, which – if we’re being completely honest – were present in more of Episode IV-VI than we might be comfortable with.

Accepting those weak points means being better able to embrace the strong ones. And make no mistake, The Force Awakens is strong in all the ways that count. Mostly, that comes from the way it can emulate A New Hope – even flat-out copy some of its central plot points – without seeming derivative. It evokes the nostalgia without simply following the template, echoing earlier ideas in a way that makes them seem fresh and new. Again, I won’t get into specifics, but you can smell them everywhere, from the ubiquitous daddy issues to the simple sight of Han (Harrison Ford) and Chewie (Peter Mayhew) bickering like an old married couple. The film definitely finds enough wrinkles to surprise us– watch the sight of the quavering Imperial officer who has to step up and deliver bad news to his Sith overlord – and it knows just how to play what we think is going to happen without slipping into the Meta.

A good cast helps. The new kids, in particular, do quite well, with the same kind of chemistry and snap possessed by Ford, Mark Hamill and Carrie Fisher back in the day. Turncoat stormtrooper Finn (John Boyega), scavenger-with-great-potential Rey (Daisy Ridley) and even pilot/exposition-delivery-device Poe (Oscar Isaac) all demonstrate an ease with this universe that speaks well to future entries. We like them all very much, and watching them discover the same lessons that Luke learned so many years ago feels just right. (Nothing about Luke here; that would be telling.)

The universe itself attains that same resonance. We see all-new territory in this film: new planets, new aliens and little beyond the characters themselves that we’ve seen before. Yet it still feels of a kind with the previous six entries, and director J.J. Abrams naturally understands the rhythms and beats that make George Lucas’s galaxy far, far away such a beloved creation. He reminds us how rich it can be – how much is going on in every corner – which forms an ideal counterweight to the simple Hero’s Journey arc that always formed Star Wars’s backbone.

With them in place, the film’s shortcomings become easy to forgive, even the relative letdown in the villain department. None of them are bad exactly. It’s just that most of them simply mark time, with the vaunted Captain Phasma (Gwendoline Christie) hopefully poised for better things later and the really scary villain waiting for another movie or two before properly stepping up to the plate. That leaves us with Kylo Ren (Adam Driver) to push our heroes to the limit. He looks the part, but can’t quite muster the menace he needs to stand with the various Darths preceding him. A lot of this is by design, and Driver’s casting is no mistake. But the character doesn’t quite work, and while he carries his share of fine moments, they don’t add up to the bad guy we need him to be.

That goes hand-in-hand with the narrative beats that sometimes scuttle too close to Episode IV for comfort, and with a curiously rushed pacing that could have used a few more pauses. But frankly speaking, who cares? Most of The Force Awakens works exactly, precisely the way we need it to, with character and heart trumping empty spectacle every time. (“This is not how I pictured today going,” Han grumbles in the midst of the mayhem.) And with the prospect of more to come, the pitch-perfect ending here reminds us of the enticing promise Star Wars has always held, as well as the ways this terrific chapter makes good on that promise. The Force is still with us, my friends. 38 years later, it’s hard to believe it ever left.