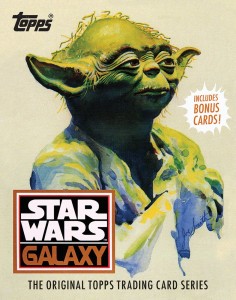 unlike Star Wars fans had seen previously. Star Wars Galaxy celebrated not only the original trilogy, but also TV specials, books, comics, and other media tie-ins. This card series would also take the unique strategy of not relying on photos from the films as with the original card sets, but utilize all new artwork focusing not only on the characters from the films but also on the vehicles, landscapes, and aliens. The cards would feature the work of one of the greatest rosters of comic book artists and illustrators ever assembled including Simon Bisley, Howard Chaykin, Grag Capullo, Joe Chiodo, Moebius, Kelley Jones, Jack Kirby, George Perez, Brando Peterson, Walt Simonson, Jim Starlin, Drew Struzan, Tim Truman, Charles Vess, Gahan Wilson, Boris Vallejo, Mike Zeck, and many others.

While you might not have the original cards, this book from Abrams is the next best thing and you don’t have to worry about damaging the corners. From 1993 to 1995 Topps released three different series in the Galaxy line with over 400 cards including chase and limited edition cards. The book depicts over 200 of these cards. Each page displays one card along with a quick notation about the particular subject and the artist of the piece.

What the galaxy series did was to give over 100 artists the opportunity to interpret Star Wars in their eyes, everything from traditional portrait style art to the bizarre and fanciful. One of the spotlights in the book is the 9 card subset from series 3 featuring the amazing watercolor work of Russell Walks.

The book features a lengthy introduction by Gary Gerani the original editor of the card series and a special afterword by Star Wars poster artist, Drew Struzan. And to TOPP it all off the book features four bonus trading cards affixed in a secure pouch on the inside back cover of the book. I was an avid collector of these cards when they came out 20 plus years ago and while I no longer have the cards, the book brought back wonderful memories.  It would have been great if they had displayed all of the cards but still a great book. 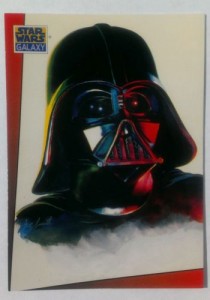 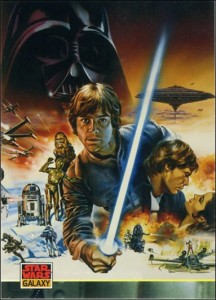 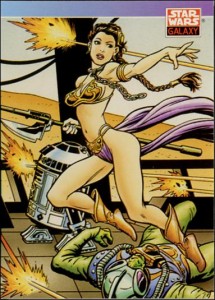