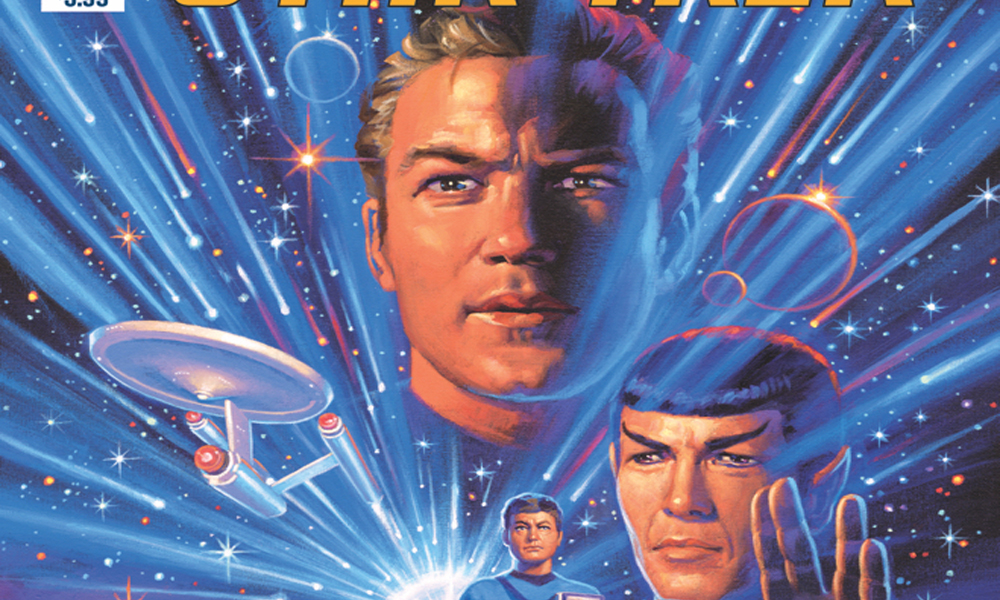 It’s doubtful that many fans of Gene Roddenberry’s original vision will find themselves half as excited to own this sedentarily scripted twenty-page periodical as “a long time collector of pop culture from New York state” apparently was, when they purchased the comic’s “gorgeous” Greg Hildebrandt cover art piece for $13,750 at auction in April 2019. For whilst the illustration which graces “the debut issue of Star Trek: Year Five” provides an inspirational representation of Captain James T. Kirk, his iconic starship, legendary crew and a plethora of planets to be explored, Jackson Lanzing & Collin Kelly’s narrative contains very little in the way of energizing action, and instead focuses heavily upon a diabolically depressed skipper of the U.S.S. Enterprise, who having received word of his promotion to the rank of Admiral by Starfleet Command, sullenly mopes about his vessel’s observation deck no longer wanting to return home. 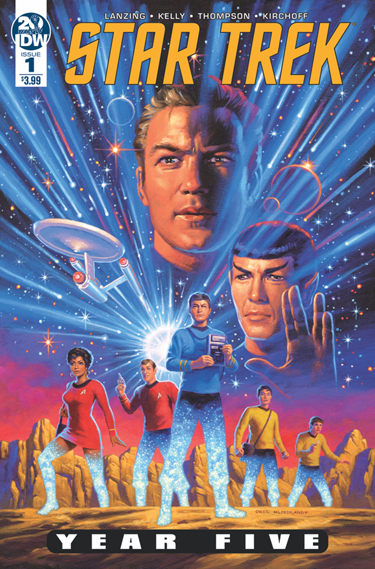 Admittedly, that doesn’t mean that this supposedly “hard-hitting… look at Captain Kirk on his last year in command” lacks any semblance of the frantic, well-choreographed fight-scenes the Sixties television show is famous for, as the publication’s conclusion contains a sadly short-lived contest between the senior bridge crew and an incredibly agitated Tholian. But before any remaining reader will encounter so enjoyable a ‘flurry of fisticuffs’ they will have first had to endure such soul-sapping sequences as Mister Spock waxing lyrical about Starfleet Engineering Corps spending two years constructing an Einstein-Rosen Ouroboros with which to protect the cosmos from the stellar explosion of the Lloyd Zeta Hypergiant, or a disagreeably inappropriate turbo-lift chat between the Science Officer and the Chief of Engineering in which the Vulcan cold-heartedly informs Mister Scott that he’s become fat, and that the popular ‘miracle-worker’ will doubtless increasingly battle obesity for his remaining days; “Whew! Are those doors gettin’ faster or am I just puttin’ on pounds?”

Just as arguably disengaging is Lanzing’s attempt to immediately hook his audience with the suggestion that “Kirk’s actions in the series will have huge ripple effects” by beginning this book with a shocking ‘flash-forwards’ to a time when the battered constitution-class captain is about to be shot in the back of the head by an unknown executioner purportedly for his criminal actions. Disappointingly, this startling situation is never resolved within this actual edition, and simply causes any impatient reader to want the story-line to hurry along so that they can ‘catch-up’ and start following its plot into the unknown, rather than already know that no matter what the Starfleet Officer does, he is always going to end up alone on his partially-destroyed ship’s bridge facing a phaser…