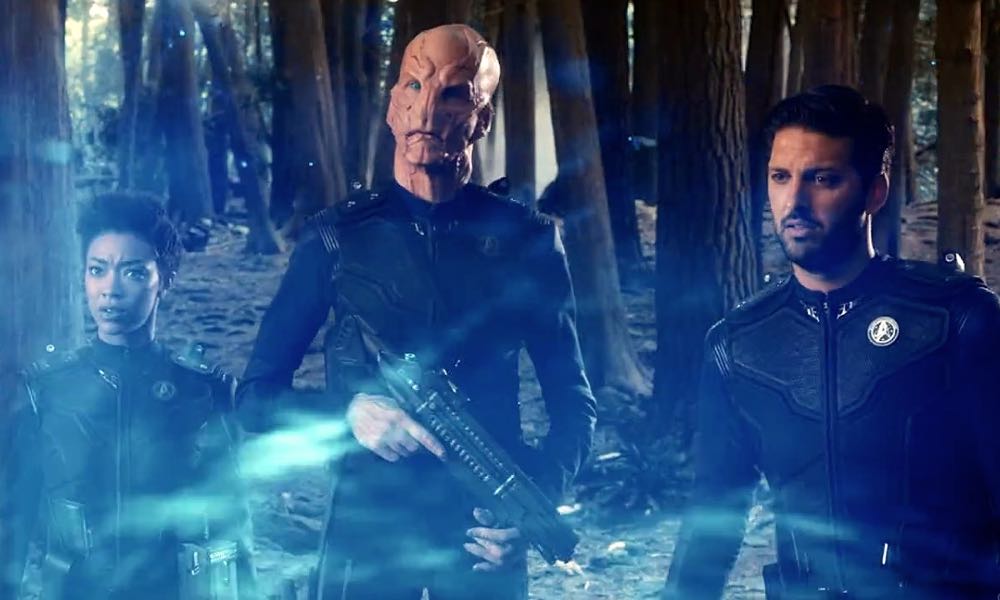 In the opening salvo of the series fall finale (the show is taking a break and returning in January of next year), we have the first half of the series first two-part episode, the second half of which will get broadcast next week. The episode presented the most sophisticated and complex narrative the show has offered yet with storylines developing on several fronts, tons of exposition, revelations, and a great deal at stake not only for Discovery and her crew but with widespread implications for the entire Federation and the ongoing war with the Klingons going forward.

Like a newbie, I was surprised late in this week’s episode that it would get continued next week. I was so caught up in the story, and I didn’t  begin to suspect until the time was close to running out for this week’s edition, leaving us with a plethora of unresolved issues in the form of cliffhangers. Bastards.

Okay, let’s take these multiple storylines one at a time. In a situation that was a potent reminder the show takes place in a time of war, the episode begins with a near-disastrous attempt to save another Starfleet ship by Discovery. The other ship and her crew were lost. The Klingons ability to cloak their ships has been spreading rapidly, emphasizing the importance of learning more about the cloaking technology and how to detect vessels using it. The Klingons ability to cloak their ships is inexorably resulting in battles ending in their favor. They are winning the war.

As a direct result of this we find Burnham, Saru, and Tyler exploring an arboreal planet, Pahvo, that is strongly reminiscent of Pandora from Avatar in hopes of discovering a clue of how to go about developing some cloaked ship detecting technology. The planet has some unique qualities which include a kind of sound continuously emitted as part of the planet’s ecosystem. At first, this quality has a detrimental and unpleasant effect on Saru’s more heightened senses, but after an initial discomfort, it also allows him to make contact with the planet’s inhabitants. Technically, these “inhabitants” are not entities separate from the rest of their organic world but are slightly more focused areas of vaporous, insubstantial clouds of energy Saru can communicate with crudely.

His communication with the Pahvoans soon seems to affect his judgment, and he seems to begin suffering from a form of Stockholm syndrome, making him entirely on board with the local message of peace and harmony, but in conflict with the mission, they were sent to do. Saru shuts down communication with Discovery, and when Burnham and Tyler conspire to complete the task contrary to his wishes, he takes steps to stop them.

It has not been apparent up until now what a formidable physical opponent Saru could be, His species is apparently much stronger than humans, and its revealed his species is capable of running at 80 kilometers an hour. He attacks Burnham when she attempts to restore communications forcing her to shoot him several times with a phaser to subdue him. Once back on Discovery he seems cured and is apologetic about his behavior on the planet’s surface.

After the dust settles and the three are back safely on the ship, the Pahvoans begin transmitting a signal that attracts the attention of the Klingons putting Discovery on the spot to defend the planet against a Klingon ship capable of cloaking itself. The Pahvoans naively seem to think they can end the war and bring about a universe where everyone can live in harmony and peaceful coexistence. Just wait until they meet the Klingons.

Also on Discovery Stamets is showing signs that being integrated into the Spore Drive is beginning to affect him mentally and causing moments of disorientation and being out of touch with his surroundings. Tilly confronts him about it because he doesn’t want to tell the doctor, his partner yet, and they agree to keep an eye on the situation and monitor it closely. Why do I get the impression this will not end well? After initially thinking Stamets was an evil dick of a guy, I have gotten to like the character more as the series continues. He now seems to have passed the phase where he was behaving like a man on psychedelics all the time and seems to be more of his original more sober self again.

On the Klingon side of things, we have some other exciting developments also. Admiral Cornwell is still a captive, and Kol is impatient for getting information from her he is sure will add to his glory. L’Rell the female who saved Voq from death at Kol’s hands submits for an opportunity to prove her worth by volunteering to interrogate the prisoner, but she in isn’t genuine. When the female Klingon enters Cornwell’s cell, she says she wishes to defect and proposes that she and Cornwell escape. The plan goes awry when Kol and a companion see L’Rell and Cornwell walking through the ship’s halls — and to dispel suspicion, L’Rell, and the admiral fight and it appears that she murders Cornwell, although it’s not certain the admiral is dead. L’Rell drags Cornwell’s corpse to an adjacent room, where she discovers bodies of some of her Klingon allies and swears vengeance upon Kol.

Later, when L’Rell meets with Kol aboard the Klingon vessel’s bridge, the leader chastises her for being “reckless” with their Federation prisoner. L’Rell swears fealty, but Kol sees through her deceit, instructing his minions to “show her how House Kor treats liars.” and that’s where the episode ends.
So you see, lots of stuff to resolve next week and it wouldn’t surprise me if some of it ends up unfinished until after the break and gets settled in January when the series returns. It was for me an entertaining and engaging episode of excellent science fiction TV full of the sorts of stuff I like to see in a series of this kind.
Share 0
Tweet 0
Share 0