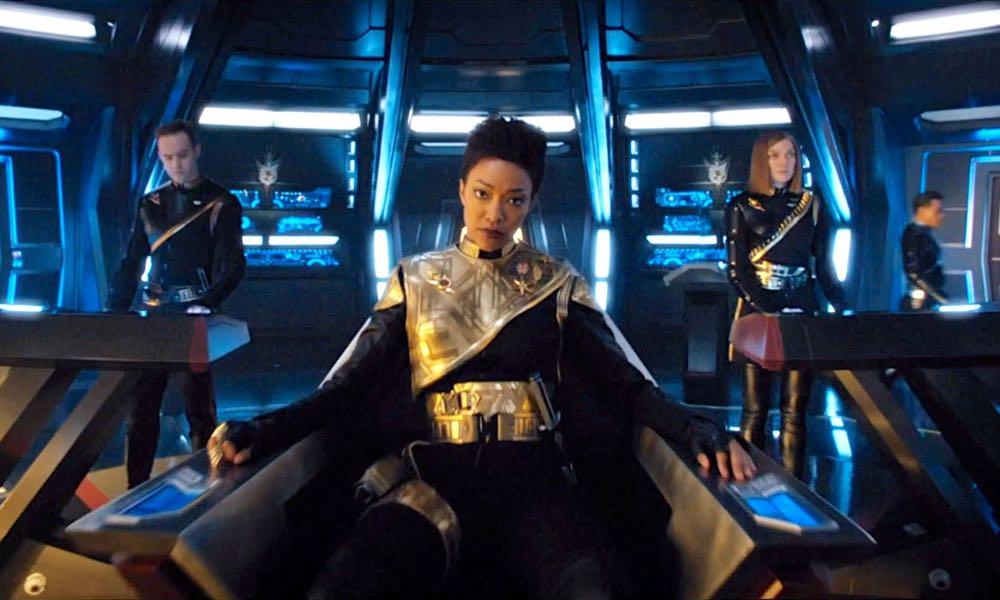 The Wolf Inside, of course,  often refers to that part of us where darkness and savagery dwell that most of us usually keep hidden. In Tyler’s case its something entirely different. The episode begins with Burnham talking about life in the dark universe and passing as one of them and being concerned about it becoming too easy to do and the fear that drives it in a society where its common. The sort of darkness that creeps into your soul and changes who and what you are without you realizing it before its too late. Just like in Orwell’s 1984 or the rise of the Nazis it’s the sort of pervasive effect that changes decent people into monsters.

As an example of the sort of bad behavior we can expect in the Terran Empire, we get treated to several people beamed into hard vacuum. These Terrans don’t mess around but they sure dress sharp. Again I must say the look of the dark universe this time around is better than any of the other previous visits done in earlier Trek series.

The Wolf Inside was a thoroughly enjoyable episode; it added a little more meat to the story than last week’s setup this time around with the introduction of more characters that populate this place and by making the situation a little more involved. It was an enjoyable hour of learning how relationships are different and getting the lay of the land. There were some interesting choices made in making some changes in the roles played by characters we are familiar with including an interesting bathing scene and the big reveal of the identity of the Emperor. 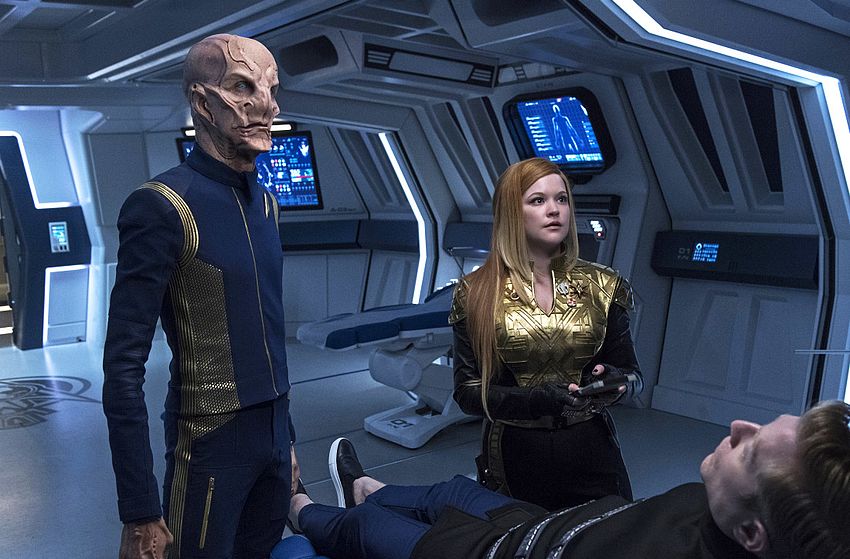 We learn right off the bat Stametz condition has still not improved but aboard Discovery Tilly and Saru are on the case using science to find a cure that might help. It served as a reminder that Tilly is there because she earned it as a scientist. She tries exposing him to more spores which initially doesn’t seem to work, but there are hints later that maybe it did.

Burnham receives orders to destroy a recently discovered rebel outpost by the Emperor but instead of just bombing it into vapor she goes down with Tyler to the surface to talk. The rebel leader turns out to be  Voq the albino Klingon speaking English this time around. He has someone he uses called the prophet to ascertain who is telling him the truth and it turns out to be Sarek complete with Dark Universe goatee. Tyler is increasingly erratic as the Klingon bits introduced in him begin to become more dominant and he attacksVoq until he can be subdued. Burnham later fake beams Tyler into space but in reality aboard Discovery

As if Michael didn’t already have a bad enough day, the episode ends with another Terran ship showing up to thoroughly destroy the rebel camp. It is the Emperor’s, and she has a familiar face. As previously speculated, the Emperor is the Mirror Universe’s Georgiou. Michael is forced to see her beloved mentor as the ruthless dictator of a fascist regime. Yeoh is excellent as the emperor she made a very impressive badass female Ming the Merciless and played the role to the hilt. I am looking forward to next week’s continuation of the story a great deal.