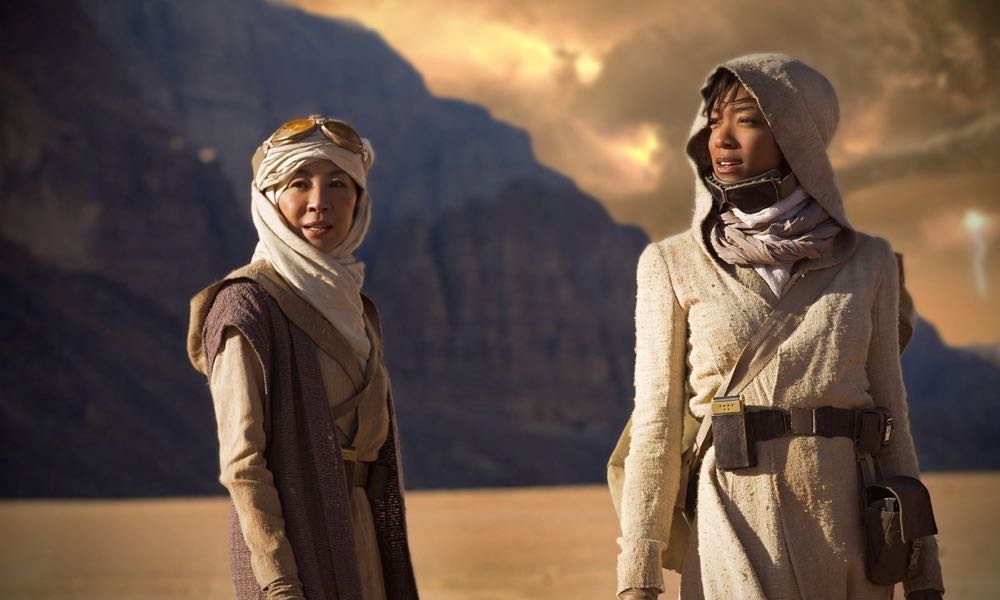 So far, Star Trek Discovery shows all the signs that the passing of the Trek torch has had the happy result of it landing in good hands and it looks very promising indeed.

Time to breathe a sigh of relief, all indications seem to point to CBS’s Star Trek resurrection as a huge success. Does it live up to the standards established by what has gone before? The answer is Yes, of course, it does. Why go through all the bother and not do it right? From the very enjoyable different and creative opening credits, it was evident this would be a mix that included some sentimental touches along with some things new and the show pulled it off admirably. Any concerns or fears about this production were not called for when considering the pedigree bestowed by the people involved with this series, but as we know, the devil’s in the details., and one detail I didn’t care for were the uniforms they decided on for the show

There is, of course, a lot of exposition going on as we are introduced to characters and familiarized with the circumstances they find themselves in all while getting acquainted with this show’s specific brand of Trek. The opening episode starts out with Yeoh’s and Mertin-Green’s characters, Captain Georgiou and Commander Michael Burnham respectively, on an away mission involving a desert planet where they are working on helping the locals survive a lengthy drought by bringing a well back to life, so they are not completely without water. After completing their mission on the dusty planet wearing rustic earth-toned garments, they are picked up by their ship, and the look and feel of the show became brand spanking new and modern. The look of the bridge was similar in a way to what we have seen before except maybe more spacious. 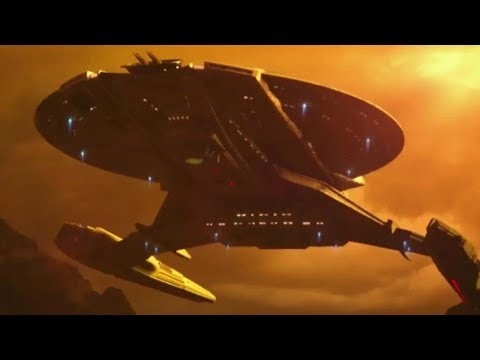 The away mission by the ship’s two top officers seems to be an indication of the way things happen on the USS Shenzhou, the ship Captain Georgiou commands. Later, when a mysterious object requires a closer inspection, it’s Burnham who goes to take a look, strapping on a jetpack and flying over. No one suggests maybe moving the ship a little closer before she goes. These are two formidable ladies who apparently have a very hands-on approach to running a deep space mission while the rest of the bridge crew remains glued to their stations.

On the bridge, there were a couple of things I was puzzled by that I caught a glimpse of that I would like explained. Was that a robot I saw on the bridge? It had the body of a human female but in place of where a head should be there was an electronic device roughly the same size and shape. It could have been a helmet of some sort, but it didn’t appear to be. Why would Starfleet build a robot with boobs? I was also puzzled by the appearance of another crew member who had some technology attached to his head that made me wonder about it, and whether he was a cyborg or not.

We are introduced to Lt. Saru, the science officer whose first instincts make him suspicious of everything as representing a threat.  The show depicts a competitive rapport between him and Burham almost like a sibling rivalry the Captain seems to find amusing. We discover that Burnham had a Vulcan upbringing, not just any Vulcan, mind you, but Sarek himself who it turns out later has installed a piece of his consciousness in her much like Spock did to McCoy. We also learn Klingons killed Burnham’s  parents.

Be prepared for a lot of reading of subtitles unless you are fluent in Klingon. There’s a lot spoken in the alien language. The main narrative revolves around one particular Klingon T’Kuvma who is trying to unite the houses of Klingon for a holy war against humanity he claims is for the survival of his race but that he is actively provoking. I believe Worf would think this guy talks too much, and so do I. His self-fulfilling prophecy quickly begins to take shape as things develop quickly in the show’s unfolding plot. The majority if the Klingons are hesitant to get fully on board with this self-appointed prophet’s fanaticism, except for one, an albino named Kol who jumps at the opportunity to enhance his social status.

When Burnham finds ou they are dealing with Klingons; she wants to give them “the Vulcan Hello” something she learned from Sarek, which means attacking them because a show of force is all they understand.  Her idea meets with stiff resistance by Captain Georgiou who refuses to fire first. Burnham feels so strongly about what she wants to do she commits an act of mutiny and gives the Captain a Vulcan neck pinch knocking her out for a moment. Burnham is about to give the order to fire when the Captain arrives in time to stop her. Burnham ends up in the brig. Meanwhile, both humans and Klingons call for backup which results in a significant number of ships from both sides facing off in space. T’Kuvma fires first, and the battle is on When Starfleet offers a cease-fire so they can talk and maybe find a peaceful solution T’Kuvma uses betrayal and deception to destroy the admiral’s flagship which then explodes with spectacular results.

Although nearly destroyed and with most of its systems offline the Shenzhou is not done yet and  Saru comes up with the idea of loading a bunch of photon torpedo heads into a shuttle and striking back at the Klingons in that fashion. Burnham escapes the brig and makes s the point it would be better to capture T’Kuvma than killing him, and so they decide on a lesser attack. It works and the Captain and Burnham (who else?) go aboard what’s left of the Klingon ship to capture T’Kuvma. Another away mission that results in the tragic death of Captain Georgiou and also the death of  T’Kuvma who gets one last chance to ham it up.

The two episodes played out so fast and fiercely; it almost felt as if it might be giving too much away and holding nothing back.  While all the mystery, adventure, and action were playing out on the screen, I wondered what they would have left for later. Burnham is court-martialed for her role in the series of events that ended with such disastrous results.  She pleas guilty and is handed a harsh sentence of life imprisonment. A preview of the rest of the season reveals the show’s real story hasn’t even started yet, and that things end up very differently for the Commander. It turns out everything that happened in the first two episodes was a preface and an elaborate setup for what follows and what happens next aboard the mysterious ship Discovery.

One thought on “Star Trek: Discovery Episodes 1 & 2 Recap And Review”