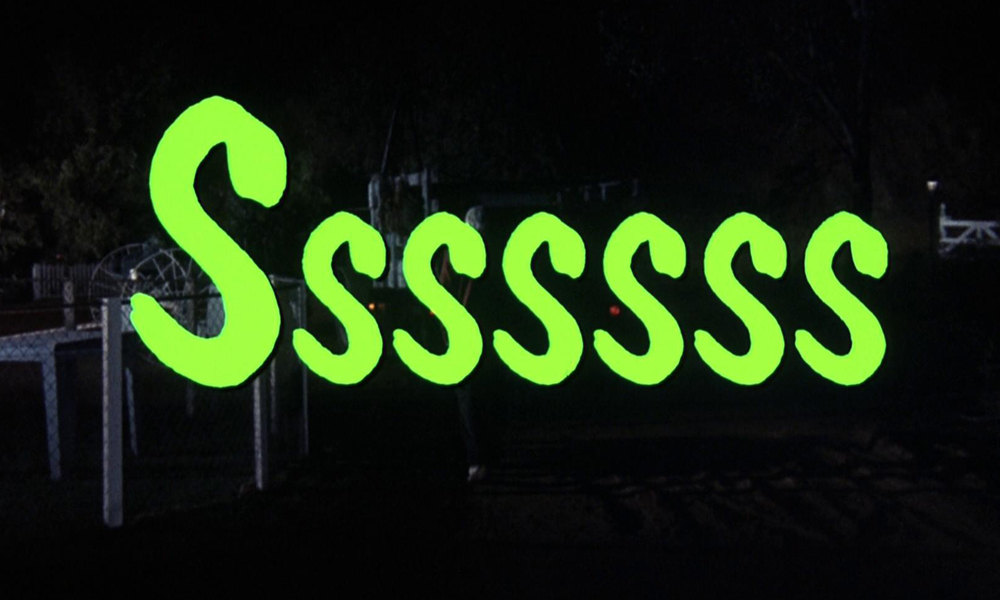 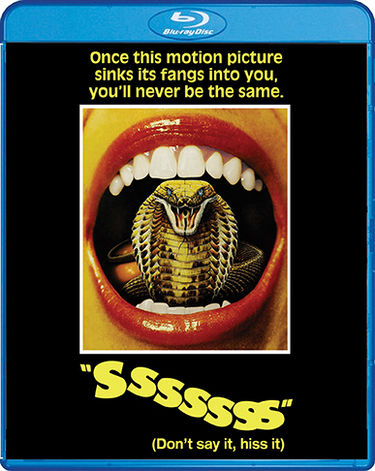 A long time ago, I was given a book called “Science Fiction from A to Z”. In that book was a film called Sssssss. The book had a short passage about the film and regaled me with a synopsis about a mad scientist who turns people into snakes. When you are a kid and read this, it both intrigues and frightens you. It is also not the type of film your parents rush out to the video store and rent for you (despite it being PG). Lo and behold, Scream Factory has released Sssssss on Blu-ray for the first time, complete with special features. Do I dare? Can the years of anticipation be worth it? Probably not, but it was high time I sank my fangs into this B movie classic.

For science fiction fans, Sssssss packs two notable TV actors. The first is Dirk Benedict, better known as Starbuck on the original Battlestar Galactica. The other is Tim O’Connor who was Dr. Huer on Buck Rogers in the 25th Century. For film aficionados, our “mad scientist” is none other than Strother Martin, the great American character actor. Best known for his role in Cool Hand Luke. So, if its production value and B movie status will keep you away, there are those three more added incentives for watching Sssssss.

Dr. Carl Stoner (Martin) is looking not only looking for a new lab assistant, but additional university funding for his experiments with snakes. We can easily deduce that Dr. Stoner needs a new lab assistant (Guinea Pig) and more money to take his evolving mankind into a new race of reptiles to the next plateau. David Blake (Benedict) is his all too eager new assistant. However, Stoner’s daughter, Kristina (Heather Menzies-Urich) keeps asking as to the whereabouts of Tim, the first lab assistant. We, the audience, know all too well where he went. It’s off to the freak show, courtesy of Tim O’Connor’s Kogen, where we will undoubtably see what fate has befallen poor Tim. 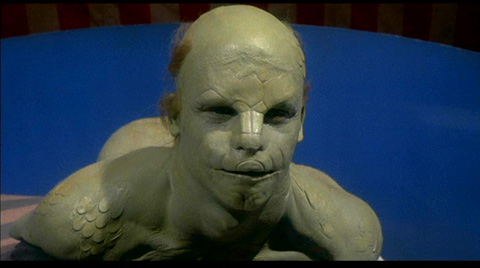 It is easily predictable where the plot of this film is going. Within minutes of arriving at the lab, David is injected with multiple anti-venoms that will prevent him from getting sick if he is bitten by one of the deadly snakes Stoner keeps. Of course, these are really injections of Stoner’s formula, and no time was wasted making David into a snake man. Contrarily, the story spends very little time developing Benedict’s actual character. He spends more time with his shirt off, getting injections, than he does actually talking. Without a true hero to care about in the film, we just sit back and root for the transformation to occur.

This is in complete contrast to the Dr. Stoner character. We see him treat a pet snake named Steven like a real member of the family, leading you to believe that perhaps “Steven” was once a human being. This part of the film is unsettling and at times touching, because it shows that Stoner has a real compassion for living things. What we learn is that Stoner is quite mad and that compassion only runs towards his beloved snakes. Usually, villains are cut and dry with their characters, but this one is layered and not just a doofus like the poor lab assistant. 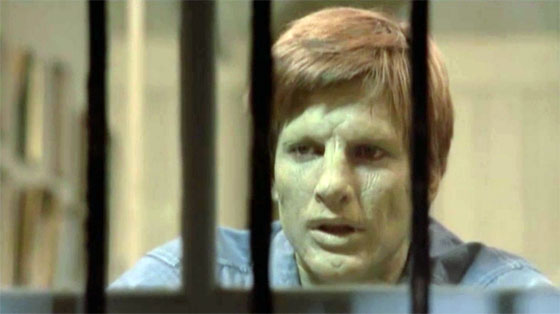 Its strange how some films can be swept away from public knowledge because of their production value or story, whereas others are marked by those involved behind the scenes. This film is actually the first Zanuck-Brown production. That might not mean a lot to some people, but their next collaboration would be a little film called Jaws. This makes Sssssss an older and almost forgotten brother to the smash hit that changed summer movies forever.

I found Sssssss to be a delight. Sure, the plot was predictable and the nudity was blocked out by inserted effects, but the snakes were all real. This made me wonder, did that mongoose really kill that cobra at the end? Scream Factory has two solid interviews with Dirk Benedict and Heather Menzies-Urich on this Blu-ray. Sadly, the years have not been kind to Starbuck, as smoking all those cigars has taken its toll. Heather Menzies-Urich, now a grandmother, laughs about the picture and admits to getting it out from time to time to show her friends. The other big contrast in these interviews are the actors’ experiences in working with the film’s director, Bernard L. Kowalski. Thank you, Scream Factory. You nailed it again with another great release!

Sssssss is a fun B movie that takes you around the Universal Studios lot, and entertains you for a good 99 minutes. Order it here from Scream Factory!

Need further convincing? Check out Mick Garris’ take on the film over at “Trailer from Hell”!

One thought on “Sssssss Blu-ray Review”