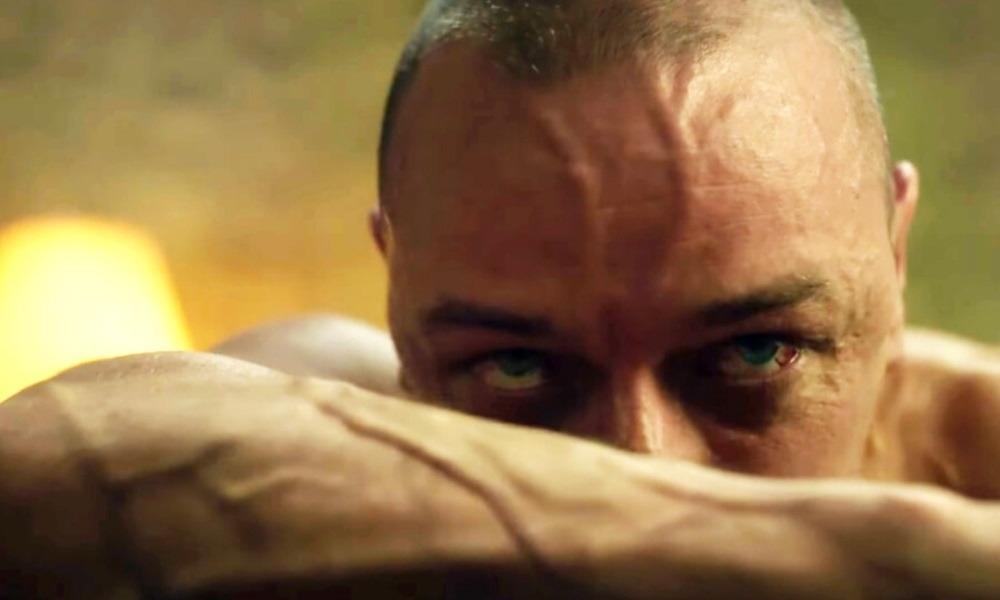 “That which does not kill us, makes us stronger.” — Friedrich Nietzsche, Twilight of the the Idols (1888) 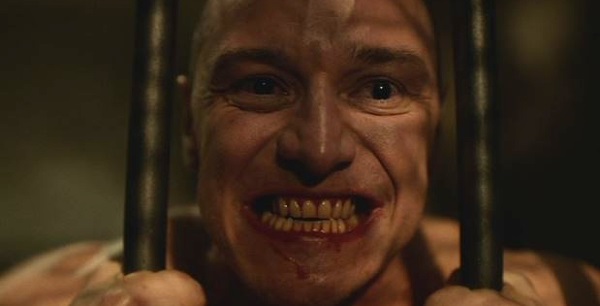 M. Night Shyamalan’s Split (2016) is the surprise standalone sequel to his overrated 2000 thriller Unbreakable, in which Bruce Willis starred as an unlikely superhero. It has the same flaws Unbreakable has but is a markedly better movie—thanks in large part to James McAvoy’s performance(s) as lunatic Kevin Wendell Crumb with his multiple personalities.

Multiple personality disorder, now known as dissociative identity disorder (DID), is a real but extremely rare mental disorder in which a person’s identity is fragmented into two or more distinct personality states. The alternate identities have different names, reported ages and genders, mentalities, predominant moods, and behaviors. And, DID being a dissociative disorder, a personality state may have no memory of the actions of or even knowledge of the existence of another personality state. DID typically develops as a result of (and as a coping mechanism for) severe and sustained childhood trauma.

Split’s core concept—or more accurately, conceit—is that “shattered” persons with dissociative identity disorder are superhuman, “more than us” instead of less. Crumb’s therapist Dr. Karen Fletcher, played by Betty Buckley, specializes in DID. She asks, “Have these individuals, through their suffering, unlocked the potential of the brain? Is this the ultimate doorway to all things we call unknown?,” and answers, “They are what they believe they are. The brain has learned to defend itself. … And perhaps now they are capable of something we’re not.”

What her favorite patient, Crumb—or rather, one of his alter egos, “Dennis”—is capable of doing is kidnapping three teenage girls from a shopping mall’s parking lot at the beginning of the movie and placing them in subterranean captivity to await “The Beast.” And unbeknownst to him, one of the girls, Casey, played by Anya Taylor-Joy, is a fellow survivor of childhood abuse. Soon after the creepy, ephebophiliacal, obsessive-compulsive “Dennis,” the girls meet two other of Crumb’s identities: the matronly, English-sounding “Patricia” and the lisping, prepubescent-minded “Hedwig.” 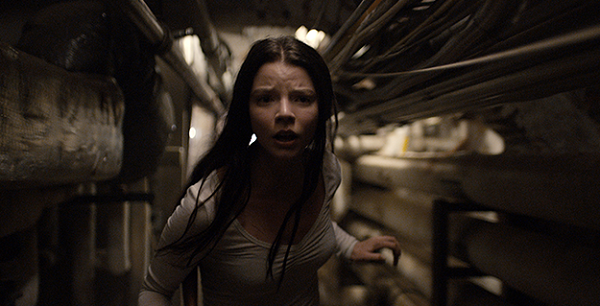 And James McAvoy plays the different “alters” convincingly and distinctively without “chewing the scenery” or even mugging. According to Kevin Wendell Crumb’s therapist, a DID patient’s physiology can change with alternating identities, and McAvoy’s almost seems to change when he switches between Crumb’s alternate personalities. James McAvoy’s performance(s), the subtly horrifying premise, the unsettling and claustrophobic atmosphere, suggesting evils far more than showing them, and the often Kubrickian compositions are the best things about Split.

The worst things about Split are how half the time its “slow burn” feels more like a thaw, how it doesn’t have enough horror and terror payoffs, how it doesn’t explore in greater depth its psychological themes, and how it doesn’t fully realize the potential of its premise. There are other problems with the movie. Most of the therapist’s screen time is blatantly expository. The captive teenage girls aren’t as terrified as they should be given their predicament. And the movie’s conceit of DID-conferred superpowers is treated with a little too much reverence.

(M. Night Shyamalan’s Unbreakable had an even slower burn with even fewer payoffs, wasted even more of its potential, and treated the not-really-all-that-earth-shattering core concept—that a nearly invulnerable man walks among us—with an almost religious veneration.)

Thus, Split merits a B- but could’ve attained an A. The movie should’ve featured Dr. Fletcher’s belief about dissociative identity disorder being taken even less seriously by her peers to intensify both suspense and surprise. And the interactions of Crumb’s alters with Dr. Fletcher and with the captive girls should’ve created more psychological horror. But it is significantly better than its predecessor Unbreakable, and perhaps its sequel Glass will be even better.

D.V.D. EXTRAS:
⦁ Alternate ending: This is actually just a scene deleted from the end rather than an alternate ending, and the movie’s better without it.
⦁ Deleted scene: “Casey at party”: This brief sub-scene was just a minor brushstroke in the depiction of Casey’s alienation.
⦁ Deleted scene: “Meeting Shaw”: The People v. O .J. Simpson star Sterling K. Brown played Dr. Fletcher’s neighbor, and all his scenes were cut as completely as Nicole Brown Simpson and Ronald Goldman. Shaw teaches neuroscience, but in this scene he endorses the fallacious triune brain model, telling Shaw that “most of evolution is this way. Nothing is thrown away … The deep and ancient parts are still functioning. The crocodile brain is still alive.” This is almost as asinine as the “10% of the brain” myth, so the movie is better without this scene (even though it supports and foreshadows its ending).
⦁ Deleted scene: “Shaw has a party”: Dr. Fletcher attends a party in Shaw’s apartment, where he tells her it’s possible that her DID patients are “compartmentalizing in the same fashion” as autistic savants. In other words, DID may confer extraordinary abilities just as autism can. (Yeah, that’s the ticket!)
⦁ Deleted scene: “Shaw’s date”: The elderly Dr. Fletcher drops by Shaw’s apartment unannounced and talks to him and his buxom brunette date about DID: “Psychology and physiology are linked …. That is scientific fact. When you stress, your blood pressure goes up. … The placebo effect is scientific fact. DID patients have changed their body chemistry with their thoughts. What they think they are, they are.” And, showing that her interest in DID patients (and him) isn’t just professional, confesses, “I’m not just using you to prove my thesis. You know, sometimes I think I’m obsessed with DID patients because I envy them. … They’re never alone.” (In the movie, she says that she’s “always lived alone” and that her “patients are [her] family.”)
⦁ Deleted scene: “Girls talk”: In this brief sub-scene, the three teenage girls try to figure out why they were kidnapped.
⦁ Deleted scene: “Patricia talks meat”: “Patricia” informs Casey and Marcia that “full carcass feeding is simply the best thing for animals.” TMI?
⦁ Deleted scene: “Casey tells her dad”: No, Casey doesn’t really “tell her dad,” and this brief scene would’ve added no value to the movie.
⦁ Deleted scene: “Hide and seek with Hedwig”: This brief sub-scene would’ve added no value to the movie.
⦁ Deleted scene: “Maybe we are crazy”: “Dennis” expresses doubts about the mission.
⦁ “The Making of Split”: This is M. Night Shyamalan’s “most cinematic movie” because it’s “very, very artistic and beautiful” but “stylized in a very subtle way: very natural but mysterious and moody.”
⦁ “The Many Faces of James McAvoy”: Steven Spielberg said that 90% of directing is casting, and James McAvoy was perfect.
⦁ “The Filmmaker’s Eye: M. Night Shyamalan”: M. Night Shyamalan “knows exactly what he wants.”