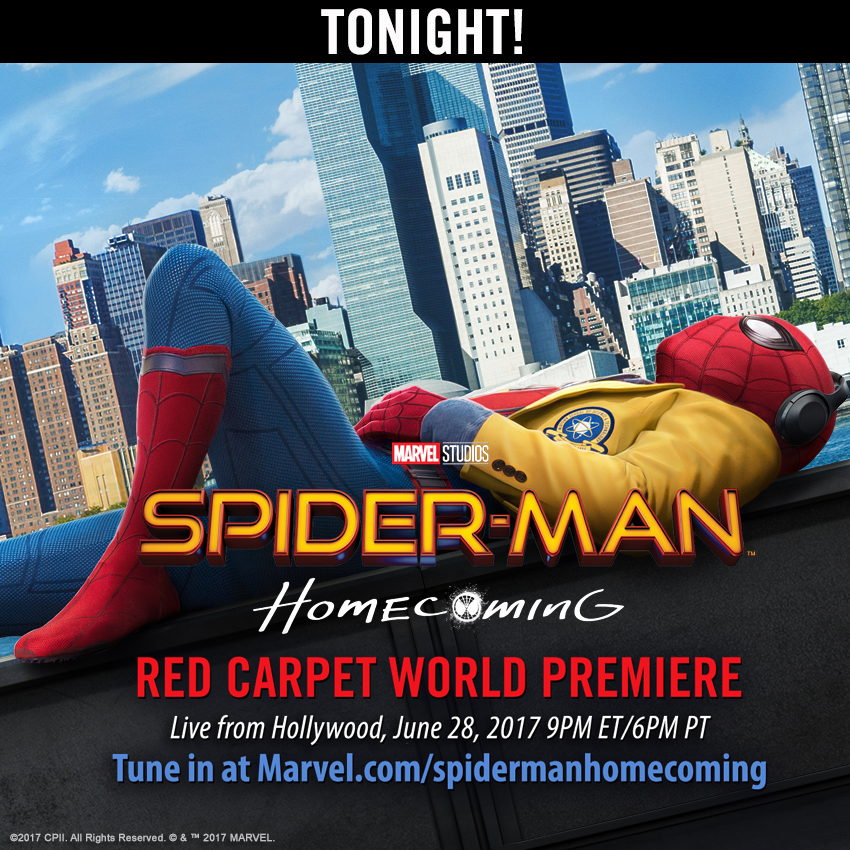 Tonight, Marvel and Sony will host a live Red Carpet streaming event. Below you will find a live stream link and further details about the event.

Press Release: June 28, 2017— Sony and Marvel proudly invite one and all to experience the World Premiere of “Spider-Man: Homecoming,” LIVE from Hollywood! On June 28, 2017 at 6:00 p.m. PT/9:00 p.m. ET as your favorite stars arrive at the legendary TCL Chinese Theater!

This LIVE event, available to watch at marvel.com/spidermanhomecoming, facebook.com/Marvel, and twitter.com/marvel, will get you up close and personal with the cast of “Spider-Man: Homecoming” like no one else can!

Synopsis: In Spider-Man: Homecoming, a young Peter Parker/Spider-Man (Tom Holland), who made his sensational debut in Marvel’s Captain America: Civil War, begins to navigate his newfound identity as the web-slinging super hero in “Spider-Man: Homecoming.” Thrilled by his experience with the Avengers, Peter returns home, where he lives with his Aunt May (Marisa Tomei), under the watchful eye of his new mentor Tony Stark (Robert Downey, Jr.). Peter tries to fall back into his normal daily routine – distracted by thoughts of proving himself to be more than just your friendly neighborhood Spider-Man – but when the Vulture (Michael Keaton) emerges as a new villain, everything that Peter holds most important will be threatened.  Directed by Jon Watts. Produced by Kevin Feige and Amy Pascal. Screenplay by Jonathan Goldstein & John Francis Daley and Jon Watts & Christopher Ford and Chris McKenna & Erik Sommers, Screen Story by Jonathan Goldstein & John Francis Daley, Based on the Marvel Comic Book by Stan Lee and Steve Ditko.