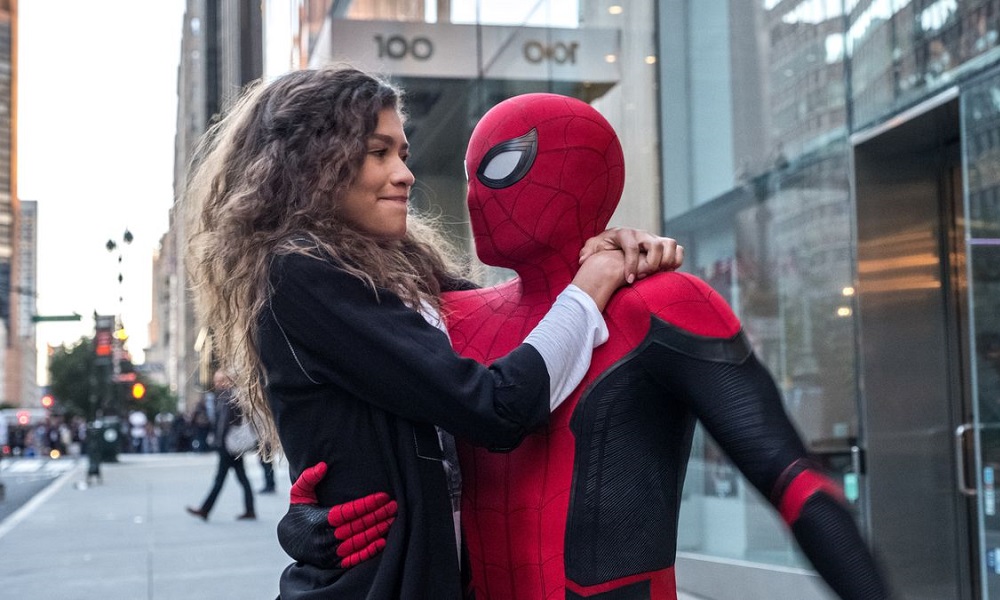 (SPOILER ALERT: Mild spoilers for Endgame – though none from Far From Home – lurk below. Fairly warned thee be says I.)

Spider-Man: Far from Home is technically the final movie in the ten-year arc climaxing with Avengers: Endgame earlier this year. That makes it more of a coda or an epilogue than anything else, which is unusual considering Peter Parker’s (Tom Holland) convoluted corporate history and unusual entry into the MCU. And yet, like so much else with this saga, the timing feels just right. This is a little dessert at the end of a gigantic meal: sweet, comforting and hinting at things to come.

That depends on a careful combination of elements to succeed. Arriving as it does in the titanic shadow of Endgame, it can’t hope to compete in terms of scale, yet its more modest storyline still needs to work on its own terms or else everyone will forget about it the minute they walk out of the theater. On top of that, it needs to be an interesting Spider-Man movie, with two previous reboots behind it and a lot of the juicy parts of Peter’s story covered reasonably well along the way.

The wild thing is that Far From Home succeeds surprisingly well on all of those levels, and by doing a lot less than Endgame actually turns into a lovely effort all on its own.

For the first part – the inevitable nod to Endgame and the MCU as a whole – it indulges in the expected Easter Eggs and in-jokes. But it adds a man-on-the-street wrinkle by filtering things like the Snap through Peter’s mundane high school. Far from Home has a lot of fun with the notion of half the students essentially “skipping” five years after disappearing in a puff of smoke, and having to deal with formerly younger kids now bigger and older than they are. Far From Home ponders that with the perfect twinkle in its eye, filtering the issue perfectly through a “high school, what are ya gonna do?” wink.

More importantly, it follows through on the arc Peter started in Endgame. His mentor, Tony Stark (Robert Downey, Jr.), is gone, and while the world mourns Iron Man, Peter has to figure out what that means going forward. It’s a bumpy road, especially with Nick Fury (Samuel L. Jackson) riding up his ass about some damn emergency or another, and Far From Home ensures that we feel the emotional follow-through of Endgame as well as other little nods to the big picture (and a few hints at a “multiverse” just to get fans salivating).

That in turn leads to Far from Home’s second big challenge: the reboot thing. How does it touch on the required parts of Spidey’s mythology with previous franchises covering that ground so well? It found a way. We got a taste of it with Homecoming and new wrinkles on figures like Peter’s Aunt May (Marisa Tomei). Far From Home takes that ball and runs with it, pushing the expected developments in Peter’s story. A lot of it is fan service, but that doesn’t hide the very entertaining way it carves out new space for some well-used tropes.

But the best parts of Far From Home come in the middle ground between those two poles: where the need for a unique reboot plugs straight into the resources of the MCU. Tony, for example, becomes a beautiful surrogate for Uncle Ben here. Cliff Robertson kind of nailed the character to the wall, and while Martin Sheen acquitted himself well enough, the MCU has been coy about the details this time around. Suddenly, here’s Iron Man, and not only does Peter have a mentor he feels obligated to live up to, but we actually experience the emotional payoff more keenly since we’ve seen Tony mentoring Peter in four previous movies and understand all too well what he’s lost.

The same principle applies to the latest baddie, a would-be hero named Mysterio (Jake Gyllenhaal) who may be both more and less than he seems. Spidey’s villain bench is deep, and this specimen holds an honored place among them. Yes his shtick was always a little creaky, and beyond the striking look, he sometimes struggled for traction. Gyllenhaal fixes that in about thirty seconds. Indeed, he feels something close to definitive: integrating the essence of the character into the MCU in a manner that’s nothing short of miraculous. (He even carries political timeliness in a post-truth era… which in turn engenders the film’s most irresistible bit of fan service that people will be tip-toeing around for the next few weeks.)

On top of all of that, it’s just a load of superhero fun, with another cunning villain tackling our Friendly Neighborhood Webhead who isn’t quite sure he’s up for the job. The fact that is does so well with that equation makes it a great option for the 4th of July. The fact that it combines so many other elements in the process gives it a sense of near perfection. Are there better Spider-Man movies? Maybe one or two. But I’m not sure any version of Far From Home could have improved on what we see here… and there’s no better character to put the bow on top of this extraordinary chapter in Marvel’s story.