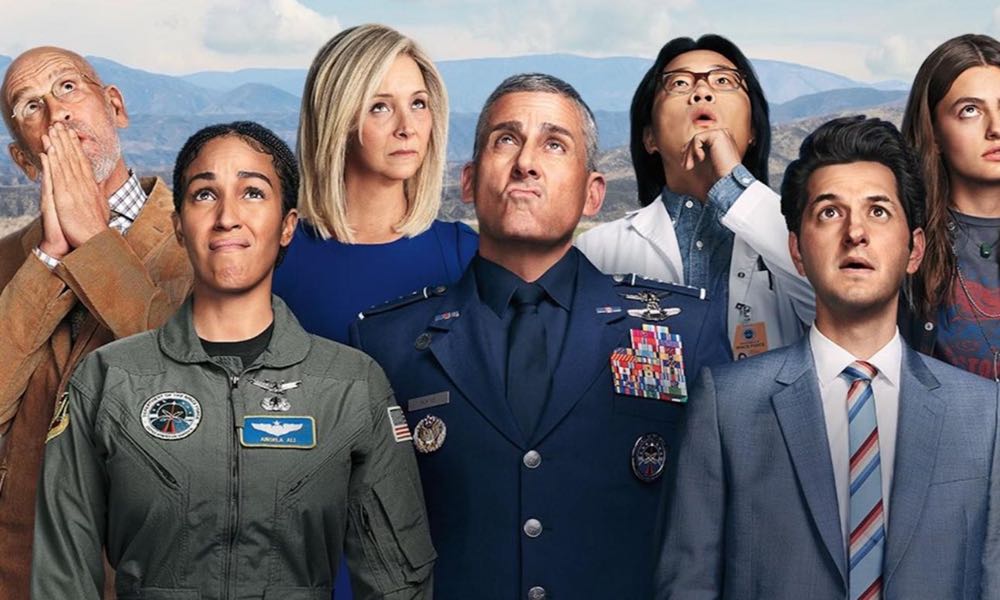 One of last year’s pleasant surprises was this sci-fi satire born out of reality. With the recent announcement that the long-delayed production of season two of this series has finally begun, we thought it would be a good time to take another look at season one.

Not familiar with this title? Space Force (Netflix – 2020): Space Force is an American comedy television series. It centers on a group of people tasked with establishing the sixth branch of the United States Armed Forces, the United States Space Force. Carell’s character, Mark Naird, is the first general of the Space Force and is in charge of the effort, and the series follows his collaboration to get “boots on the moon” by 2024, per the president’s orders. It stars Carell, John Malkovich, Ben Schwartz, Diana Silvers, and Tawny Newsome.

When I started watching Space Force, it made me sad. For some reason, I forgot that sometimes a new show needs time to find its footing. Like a novice TV viewer, I was expecting something polished and genuinely funny right out of the gate, and as an old hand at this, I should have known better. Still, it was a little shocking. Carrel, for some reason, is initially missing in action. The chemistry I had envisioned between two seasoned pros like Carrel and Malkovitch was not there, and if anything, their exchanges were awkward and even clumsy. What a revolting development.

I kept watching, and a couple of things happened. After a couple of episodes, I realized that, at least for now, this is Malkovich’s show. His performance as the sarcastic head scientist was thoroughly enjoyable stuff. Soon enough, after a few episodes, I noticed the chemistry between the two leads started to click, and we were in business. Space Force started gelling into a smart ensemble comedy. Seemingly the relationship between Naird and Mallory is another version of the classic odd-couple dynamic already developing between Carrel’s xenophobic General Naird, who goes by his gut (despite obvious indications to do otherwise), and the pure reasoning employed by Malkovitch’s brilliant Dr. Mallory.

Space Force is an ambitious, somewhat atypical sitcom; this series sets up multiple storylines out of the gate. For example, the series juggles some more science fiction ideas, like a space race narrative with China, while also pursuing more typical sitcom plotlines like Carrel’s General Naird character’s relationship with his alienated teenage daughter. So far, the show only shows a passing interest in exploring the apparent potential for mining the government and military angles for comedy gold. Space Force’s depiction of meetings of the chiefs of staff has so far only scratched the surface for the comedy to come. In a surprising juxtaposition to all this, Space Force somehow found time to develop a couple of charming little romantic subplots from its supporting cast to include also.

After watching the entire first season, it becomes evident that Space Force is one of those shows that uses its whole first season in service to introducing its characters and the world they live in, all as a setup for season two. The show does a great job setting us up with a kind of cliffhanger finish, so we have to know what’s next. I can’t wait to see season 2 of this; I expect it will be great TV.

Concerned there may be no season 2? There’s nothing to worry about since it was announced back in November 2020 that the Netflix original series would be returning for another season, which means we get to see much more space humor.