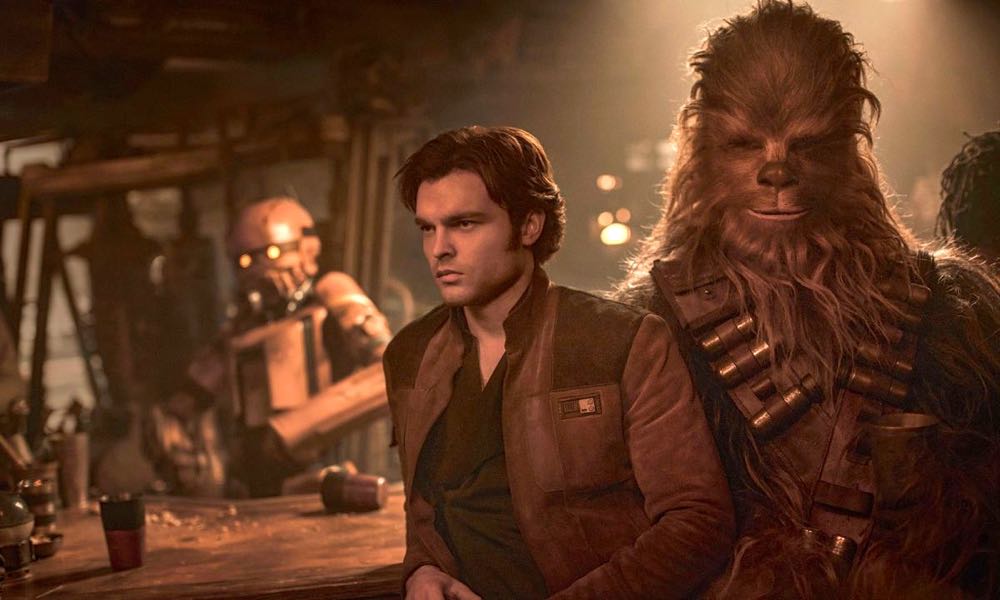 Say what you want about Disney, but one thing you can’t take away is, the house of mouse knows a lot about high adventure and this attempt at filling in some of the gaps in the life story of one of the Star Wars franchise’s key figures is a film with classic high adventure sensibilities. It’s when Solo: A Star Wars Story attempts to be more than that; the film runs into trouble carrying out its intended and ambitious goals.

I have spoken before about the tribute approach Disney uses in its attempt to create new additions to the Star Wars Universe franchise that genre fans won’t reject out of hand and embrace as acceptable new canon to that galaxy far away.  True to form, Solo: A Star Wars Story is another tribute to the great films of the past. This time around, the film’s narrative gets modeled after the great westerns of the fifties and sixties. The trouble with doing tributes is if you get it wrong, a poorly done tribute becomes a parody, and occasionally, that’s what happens here.

In addition to being a high adventure, Solo: A Star Wars Story is a film that attempts to be a lot of other things as well. This film tries to tell several stories simultaneously. Solo is, in part, a story about a man and his love for a spaceship. The film’s narrative recounts the history of Han’s relationship with the Millenium Falcon and his affection for the vessel ( I felt this aspect the story deserved more attention). Solo is also a story that does a good job exploring themes about friendship and male bonding. Also, in addition to mimicking westerns, Solo is a tribute to the classic crime caper movies of the past.

Not familiar with the film? Solo: A Star Wars Story (or just Solo) is a 2018 American space Western film based around the Star Wars character Han Solo, also featuring his original trilogy co-protagonists Chewbacca and Lando Calrissian. Directed by Ron Howard, produced by Lucasfilm and distributed by Walt Disney Studios Motion Pictures, it is the second Star Wars anthology film following Rogue One (2016). Alden Ehrenreich stars in the title role, with Woody Harrelson, Emilia Clarke, Donald Glover, Thandie Newton, Phoebe Waller-Bridge, Joonas Suotamo, and Paul Bettany co-starring. The film explores the early adventures of Han Solo and Chewbacca, who join a heist within the criminal underworld ten years before the events of A New Hope.

Han, the franchise’s beloved bad-boy, antihero-with-a-heart-of-gold, is painted as an absolute fool here. He gets portrayed as a brash loudmouth with an overabundance of confidence based on nothing but youthful arrogance, his ego, and a questionable ability to improvise and think on his feet that, more often than not, lands him in trouble. In terms of casting, Solo A Sar Wars Story only sometimes gets it right. Revisiting this film recently, I never got fully on board with the film’s choice of Ehrenreich as the titular character, more because of the actor’s physical appearance than as a critique of his over-the-top approach to the role.

The film’s portrayal of Han’s former romantic involvements is one of this movie’s weakest attempts at telling an engaging story. On the other hand, when it comes to the blossoming friendship between Han and Chewie, the film is right on target. Woody Harrelson is enjoyable enough as Han’s adopted mentor; Woody does his usual thing here, playing a more humorless version of himself, and Donald Glover turns in a memorable performance as the cape-wearing, Star Wars version of a metrosexual, Lando Calrissian.

.This film sets out to explain and answer all the questions fans have had about Han’s story over the years, and like a checklist, the film, with both plausible and implausible explanations, ticks them all off one by one. The film explores topics like: How did Han get his name? Or, How did Han and Chewie meet? What’s the real story behind who owns the Millenium Falcon? What’s the real story behind the Kessel run? The film even tackles the million-dollar question: Did Han shoot first?. Often, in trying to tie up all those loose ends, the film’s screenplay sometimes feels overly contrived entirely to satisfy that purpose, and a story that feels too contrived is never considered a good thing

Solo has the advantage of taking place in the Star Wars Universe, which means the film’s story gets a big boost from the top-notch CGI for which the franchise is known. They are called Industrial Light and Magic for good reason. Solo A Star Wars Story is a flawed film that only partially achieves its goals, but that still manages to, at least, partially succeed as an enjoyable outer space adventure.