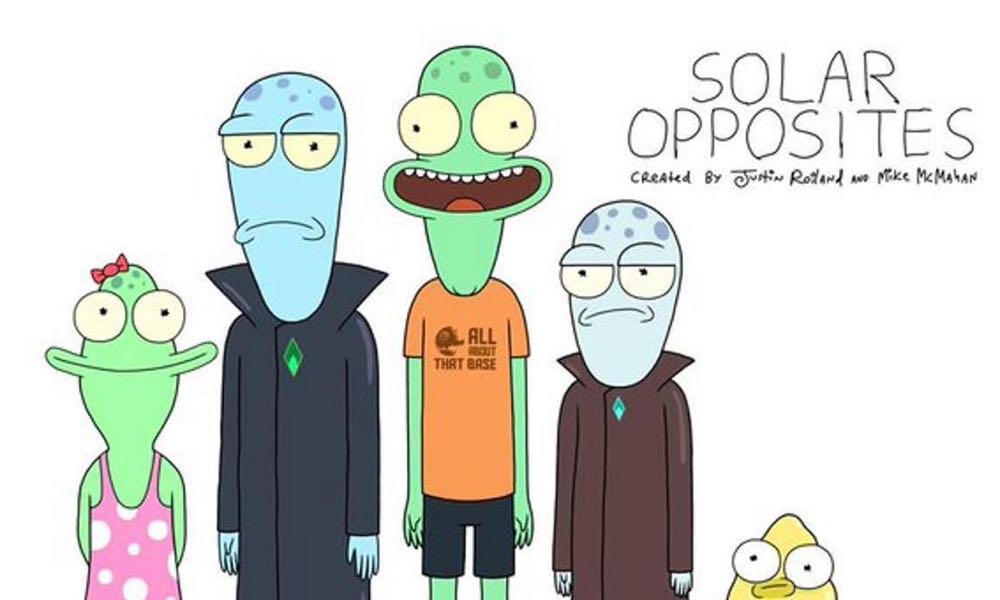 Solar Opposites, Hulu’s new animated alien-visitation sitcom, is groundbreaking in more than one way. This highly amusing series hits the reset button while setting new standards for animated series intended for adults, while also setting new standards for the sitcoms it satirizes as well. This series is dark, cutting edge material, filled throughout with multiple deaths in every episode. Loaded with F-bombs and dialogue not suited for the very young or squeamish, Solar Opposites is not meant for everyone. This new series is a terrifically amusing science-fiction comedy that raises the bar for adult genre TV.

This show manages to be one of the funniest series I have seen in a while that makes a memorable first impression rivaling those made in the past by its distant cousins, the Simpsons, Futurama, and Invader Zim. The series represents a noteworthy accomplishment in that the show’s creators managed to unlock the code for taking what is essentially a very dark narrative and making it hilariously funny. Solar Opposites is not TV for kids.

A new series. Solar Opposite is an American animated sitcom created by Justin Roiland and Mike McMahan (a writer and producer on Rick and Morty) for Hulu. The show’s premise centers around a ‘family’ of aliens from an advanced world who must take refuge in western America. They each adapt to their situation in different ways. The series debuted on May 8, 2020.

Solar Opposites starts in the usual manner of introducing its protagonists and the universe in which they exist. We get introduced to the show’s lead characters, a ‘family’ of five aliens who crashed landed on earth after their home planet got destroyed by a meteor. This alien tribe is composed of two adults, and two younger teenaged aliens referred to as replicants, who are clones of the adult aliens. They are, Korvo a serious-minded scientist, and the group’s leader, Terry, also a scientist and Korvo’s partner. Their teenaged replicants are Yumyulack, Korvo’s replicant, and Jesse, Terry’s replicant, who appears to be a female of the species raising questions about Terry and gender.  Rounding things out is a plump, worm-like infant called Pupa (outside of describing it, is it a play on words, as in little pooper?)

As you might expect in a story like this, a lot of the humor is based on fish out of water stuff as the aliens try to assimilate and adapt to life on earth. Ironically, (of course) it turns out these aliens are all too human in a lot of ways, as long as those humans are homicidal sociopaths armed with advanced technology. Humans don’t get spared here either; they get portrayed as either stupid, insane, or both. The human principal and teacher at the school the younger aliens attend get portrayed as foul mothed, sex-crazed, alien-hating xenophobes.

These aliens are officially made welcome and given a home Alien Nation style. As we learn more about them, the more simultaneously disturbing and amusing the show becomes. We learn that physically at least they share some of the same properties as plants. We also soon discover they have a complete disregard for human life. These aliens also have a vast assortment of futuristic technology suitable for any occasion. The series depicts the aliens using their tech in a pretty casual and often irresponsible manner with unpleasant results for others nearby

One of its most appealing features, the show’s very amusing expletive-filled satirical dialogue comes in the same fast and relentless manner popularized in vaudeville and old Abbott and Costello movies, giving the series a unique style that sets it apart in the world of 21st-century sitcoms  The show’s outrageous dialogue always seems eager to outdo itself in terms uttering the most disturbing stuff possible. Just when you think you have heard the worse the show has to offer, some even more scandalous dialogue gets casually inserted into the conversation that is LOL funny and Ewww inspiring at the same time.

In case you haven’t figured it out yet, yes, this series comes highly recommended as enjoyable animated adult genre entertainment that you should run out and watch as soon as possible.