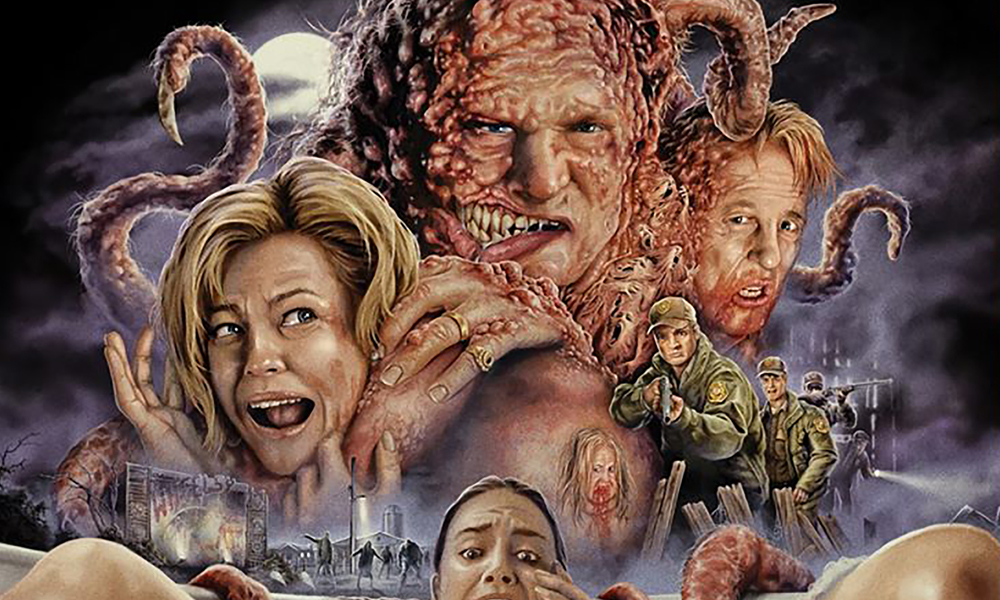 It’s funny how a movie released in 2006 and got little or no attention, is, today, a cult classic. It is also worth considering if released today with the same stars and director, how much more said film could have made. Today, we look at Scream Factory’s Collector’s Edition of James Gunn’s Slither.

In case you live under a rock that does not have a direct pipeline to the Marvel Cinematic Universe, yes, this is the same James Gunn who directed both of the Guardians of the Galaxy movies. Oh yeah, and that big weird thing in the center of the cover photo, that is this summer’s breakout hero, Yondu, played by Michael Rooker. We are getting ahead of ourselves here, so, for the uninitiated, WTF is Slither?

Slither was originally intended to be a payday for James Gunn. In a new 30 minute interview with the director/ screenwriter, he admits that he thought it was a fun story but had no intention of directing it. However, when it was bought, the powers that be wanted Gunn to call the shots. In hindsight now, it was a star turning decision for the director/ screenwriter, and it changed his life. 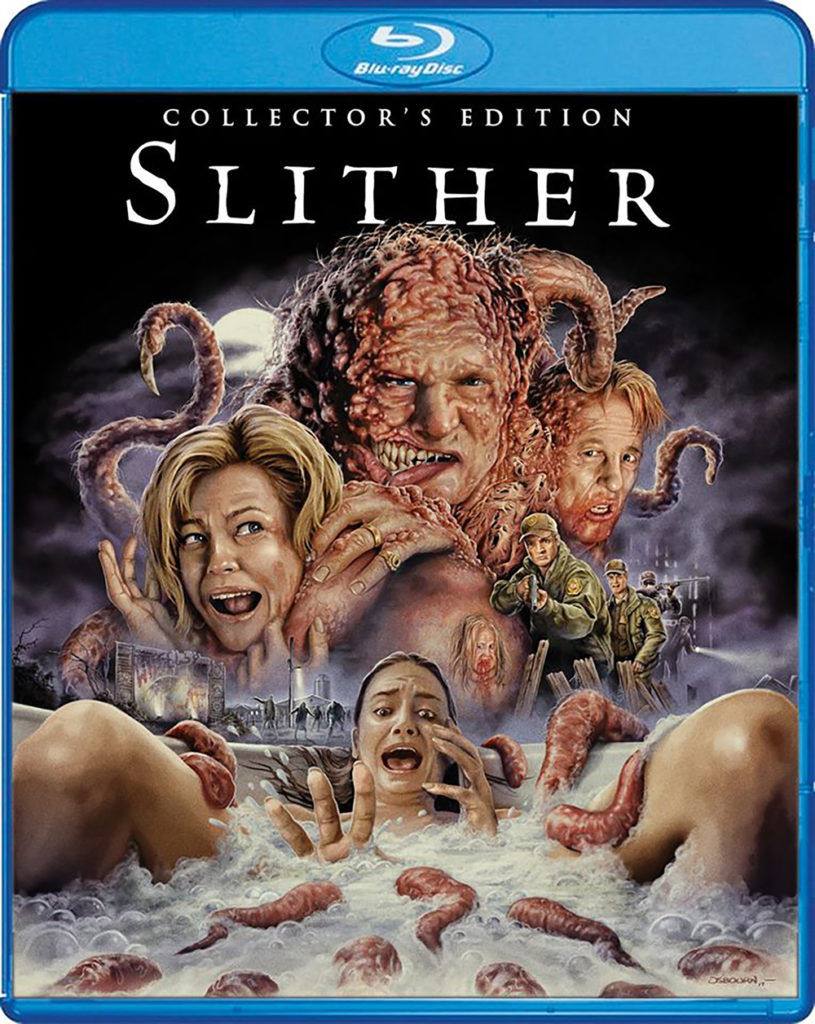 The story of Slither is really an allegory for a failing marriage. Not really the thing you think of when you see the cover art, but it is true. Starla (Elizabeth Banks) was the poor girl who was rescued from poverty by an older bachelor, Grant Grant (Michael Rooker). As they get older, they keep trying to connect, but it is evident that isn’t working. Starla’s true love in the town is the sheriff, Bill (Nathan Fillion), who years ago pushed Starla away because he thought she was out of his league. One night, Grant is about to an affair, but at the last moment realizes that it is a huge mistake and he loves his wife. However, before Grant can return to Starla, he is stung by an alien thing that crashed close to where is midnight rendezvous was about to transpire. Unbeknownst to Grant, a tiny parasite has just been injected into him, a parasite that will conquer the world if the good people of the town don’t band together to stop it.

In a lot of ways, Slither is a great homage and send-up to the great modern horror movies that have come before. The film relies heavily on The Thing, Night of the Creeps, Invasion of the Body Snatchers, Night of the Living Dead, and even just a pinch of Jaws. Who you really have to give credit to is Michael Rooker. In a lot of ways, this was his come back role and really put him back on the map. Sure, he was known for films like Henry: Portrait of the Serial Killer, Mallrats, and Cliffhanger, but here he finds a way to be both slimy and endearing. I believe that all comes from Gunn’s writing and directing. Certainly, he was about to cheat on his wife, but after being rejected yet again by her, he comes close to the fire only to realize how much he really cares for her. Complementing this is Banks’ performance as Starla. She is a cold fish to him, initially, but throughout the picture, he continually makes every effort to save him, despite what he has become.

If this is your first foray into Slither, fear not. It is not just the allegory of a failed marriage and some really odd love story playing out on screen. The film is also ridiculously funny and that comes from Nathan Fillion leading the charge. As the humor goes, it was fascinating to learn, in the special features, that all the dialogue is what was scripted. This, in-hindsight, is obvious as both of Gunn’s Guardians movies also find that great niche of humor complementing the storytelling.

It had been a few years since I had seen the film (at least two Guardians of the Galaxys ago). I was surprised how well it had aged and was delighted to enjoy Michael Rooker’s performance all the more. In fact, there are numerous alumni from Guardians here. I won’t point them all out, but as Gunn stated in his interview, he made a lot of life long friends working on Slither.

Slither is a fun film, still. The effects hold up, the humor is great, and above all, you’ll enjoy seeing your space age Mary Poppins [Rooker] shine as the monster. If this film was released today, following the success of either Guardians movie, it probably would have taken a summer weekend, hands down. However, without Slither, there might be no Guardians. Funny how one needed the other.

·         NEW The Other MacReady – an interview with actor Gregg Henry

·         Deleted and extended scenes with optional commentary by James Gunn