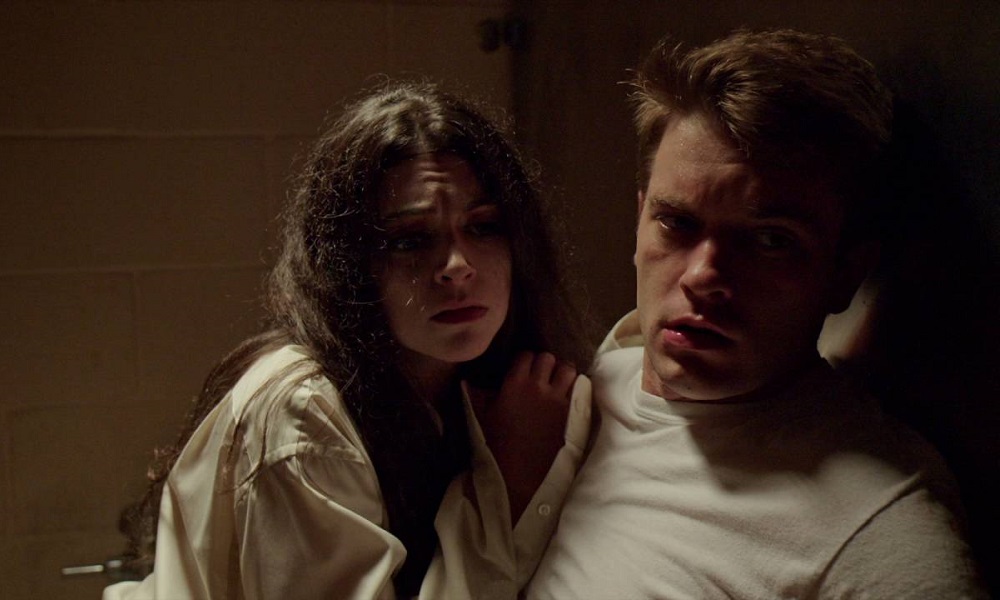 The V/H/S series has always been a hit-or-miss affair, which is typical for an anthology franchise. The better entries in it inform SiREN quite well: a feature based on a lovely bit of evil called “Amateur Night” and directed by Gregg Bishop, whose “Dante the Great” found that proper Rod Serling vibe. It’s simple and straightforward, like a lot of decent horror, and while it doesn’t push any boundaries or travel into taboo territory, it knows how to elicit a properly spooky mood.

At the crux of it sits a succubus (Hannah Fierman), captured by dark magic and forced to work at a house of ill repute that claims more than the dollar bills in their subjects’ wallets. When a clueless  bachelor party shows up for a little raunchy fun, they get much more than they bargained for… though it wouldn’t be as enjoyable if a few of them didn’t prove to be made of slightly sterner stuff.

It’s all standard issue, but Bishop undertakes it with a great deal of flair, lending depth to the little details that make the characters more than cardboard cut-outs. Nowhere is that more apparent than in Fierman’s monster, possessing drives and motives beyond the simply human, and finding the sense of weird fixation that lets you know anything could happen at any time.

Bishop keeps a nice tense atmosphere that shifts gears every so often, saving his share of surprises for the proper points to unleash them. They scuttle in beneath the surface of a delightfully queasy atmosphere: our heroes ingested a high amount of mind-altering substances when they arrive at their doom, which makes the sight of, say, a woman with leeches for hair a little more of a kick in the teeth. That helps him keep the audience slightly off-kilter, and even when we think we have it all figured out, we can never quite be sure what we’re seeing.

Such an atmosphere becomes perfect for the kind of reliable scares that SiREN is interested in. Sexual politics come into play, of course, but they don’t run too deep, and beyond a general “frat boys get theirs” push, we don’t see much on that level. It’s mostly about the boo-gotchas, which Bishops helps out by giving his heroes enough positive qualities to cement our rooting interest in them. The CG effects stay in the background most of the time, but the succubus design is genuinely unsettling, and Fierman’s performance plays into the creepiest parts of her creature (watch that tail boys).

Best of all, it sticks to the program and doesn’t waste time, clocking in at a tight little 82 minutes that ensures that no scene goes to waste.  It understands that the surprises will eventually run out, and without much more in its bag of tricks it doesn’t overstay its welcome. That separates a good, tight little genre exercise like this one from more pretentious efforts that have no business swimming in these waters. If you need a few reliably R-rated scares presented in a relatively creative way, look no further.  It doesn’t need to be a masterpiece. It only needs to remind you how much fun a good horror movie can be. Mission accomplished kids!

SiREN is available now in theaters and on demand.