The 1980s were my prime time for going to the drive-in theater. For just $2 bucks per person you could get two or 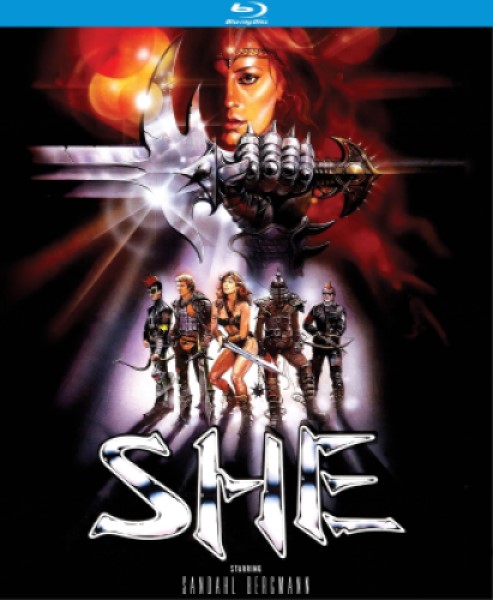 sometimes even three movies. A full night’s entertainment for the cost of a couple of gallons of gas! And I saw a lot of bad movies but somehow, I never saw “She” starring Sandahl Bergman. How could I have missed this? A little research showed that the film was never released theatrically and instead was released direct-to-video and on Cinemax.

The film says it is “Inspired by the book written by H. Rider Haggard. In fact, the only inspiration was the film’s name. There’s nothing in this horrid production that remotely makes one think of one of the greatest writers of adventure fiction. Instead, the film seems to have been inspired by too much LSD or magic mushrooms. Coincidentally, I think that indulgence is the only means possible for enjoying this movie. It’s not intentionally bad or funny. There’s nothing that leaves me to believe that the filmmakers were talented.

The film takes place 23 years after The Cancellation, some sort of nuclear apocalyptic event. The lands are not populated by various tribes of peoples. One of those is a vicious tribe of bandits who wear World War II era German military helmets and football helmets emblazoned with swastikas. The bandits ride into a non-descript village and begin killing people. Among those caught up in the attack are Tom and Dick (yeah that is really their names) and Tom’s sister, Hari. Tom and Dick are badly beaten by the bandits and Hari is taken as a slave.

Tom and Dick stumble into a land ruled by women warriors and their Goddess, She (Bergman). Men are put in shackles and hilariously try to fight against their chains but instead they look like no rhythm guys trying to dance after a few too many drinks. She enters a cave of prophecy where she battles warriors who burst of out of crates to attack, as well as a giant, Frankenstein-like monster. Now, why the hell they are in crates I have no clue whatsoever. But this leads to the film’s only scene worth watching When She bathes topless in a magical pool that heals her wounds from the battle.

She eventually accompanies Tom and Dick to rescue Hari. Along the way they encounter a group of mutants afflicted with a form of leprosy and who are wrapped in bandages; a group of toga-wearing werewolves…or maybe they were vampires, I really couldn’t tell; a hairy giant who wears a tutu; a communist with telekinetic powers; and a reject from a Monty Python skit who duplicates every time he is killed or has a limb cut off.

Words cannot aptly explain the depths of awfulness that She reaches. In over 15 years of reviewing films for various outlets it definitely ranks among the top five worst films it’s been my unfortunate opportunity to view. Outside of Bergman, who is hardly a household name herself, there isn’t another member of the cast who is noteworthy although Quinn Kessler as She’s bodyguard, Shandra, is quite beautiful.

The acting is bad, the writing is bad, the direction is bad, the soundtrack is bad, even the editing is bad. I suppose if you are a fan of Bergman’s or if you have a fondness for bottom rank cinema you might venture a look but all other’s need to avoid.