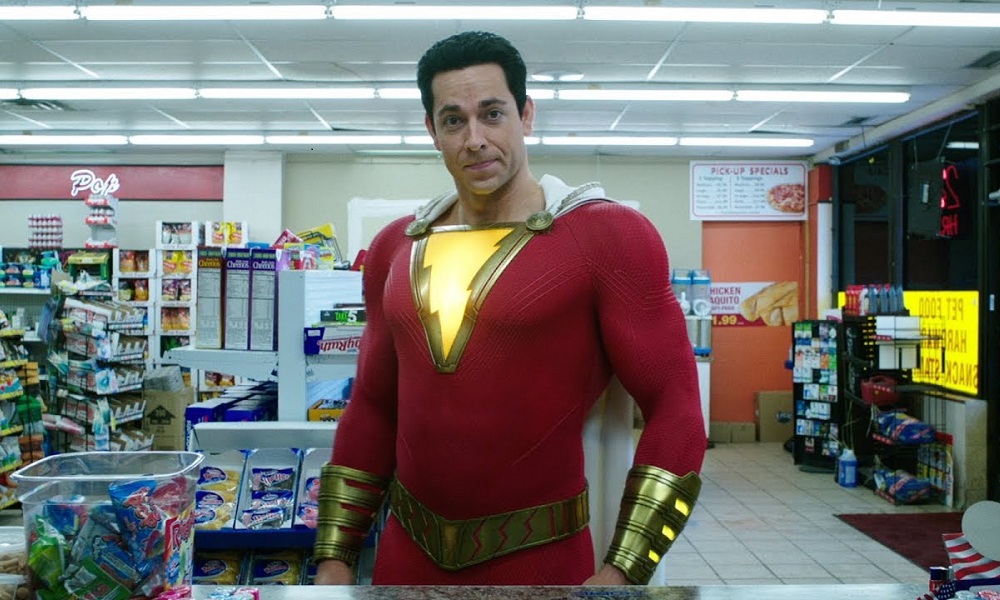 (Before I launch into this, I must state that I am referring to the character as Shazam, even though his name is Captain Marvel. Considering the current state of the pop-culture biosphere, calling him Captain Marvel will cross the streams and destroy the universe as we know it.)

Shazam represents one of those weird outliers for the DC Universe: characters they didn’t so much create as absorb by suing the pants off of a rival. In this case, the character was outselling Superman despite clearly being a thinly-veiled rip-off of the Man of Steel. The results left him kicking around the DCU as kind of a Superman to spare: a Boy Scout among Boy Scouts who could pick up the slack in the Hit Things Really Hard department. With DC’s film endeavors more or less righted and things looking hopeful (if not quite blinding) for the future of the DCEU, now seems like a safe spot to give the character his shot at the big screen.

Everyone, seriously. Just no.

The film plays it smart by emphasizing the character’s unique qualities and strives for a flat-out comedic tone as further balm against the franchise’s notorious grimdark. That makes for some enjoyable early scenes, and star Zachary Levi’s take on the character is buoyant and distinctive. But the shtick wears out its welcome quickly, and the surprisingly brutal turns taken by the script clash badly with its funnier elements: leftover angst the DCEU has yet to purge.

Furthermore, once you get past the core notion of, as Levi put it, “like Big with super powers,” Shazam! carries absolutely nothing to hold our attention. It plays the threats comparatively safe, so we never feel any duress; the characters are thinly developed and their interactions massively contrived; and the inherent joy of superheroism at its purest – the kind of innocent fun a figure like this should embody – never leads the launching pad.

Credit Shazam! at least for knowing where its strength lies… namely at the notion that its mighty title character (Levi) is literally a 12-year-old boy. Young orphan Billy Batson (Asher Angel) passes the mystic test of an ancient guardian wizard (Djimon Hounsou) to gain the powers of the gods and a 6-foot-4 body well suited for the smashing of evil. That throws new foster family into disarray, as well as leaving them vulnerable to a sinister also-ran (Mark Strong, solid as always) who’d like nothing more than to steal the boy’s powers for his own.

Unfortunately, while Levi nails the wide-eyed innocent shtick, the movie tuns out of gas on that front long before he does. It tries to mine some material out of its “with great power comes great responsibility” theme, but it largely goes through the motions instead of crafting anything memorable. The more down-to-earth material, such as Batson’s struggles to fit in with his foster family or his ostensibly heartbreaking search for his real mother hit every wrong note in the book, resulting in a contrived dramatic pay-off that fails the most basic test of plausible human interaction. People simply don’t behave the way Shazam! insists they do, and the results cost the film its soul.

As for the remainder… meh. The effects are respectable, but otherwise routine, and the bevvy of supporting characters struggle to assert themselves amid the stock dialogue and unconvincing warm fuzzies. That leaves Levi alone with his finger in the dyke, and while he holds it together far longer than he should have been asked to, he can’t carry the movie without better material backing him up.

I realize I’m in the minority on this one, and honestly this isn’t the hill to die on when it comes to superhero films. There’s nothing toxic here, and judging by the bevvy of early public screenings, Warners knew they had a winner on their hands. I don’t begrudge anyone their enjoyment of it. But that’s not the same as sharing that enjoyment, and whatever magic this film holds just passed me by. In its place, I see a squandered chance to do something fun with an oddball character and help the DCEU shake its early bugaboos for good. Judging by the early returns, they’ll get another shot at Shazam in a sequel. I hope that film does better than this one.

One thought on “Shazam — Movie Review”