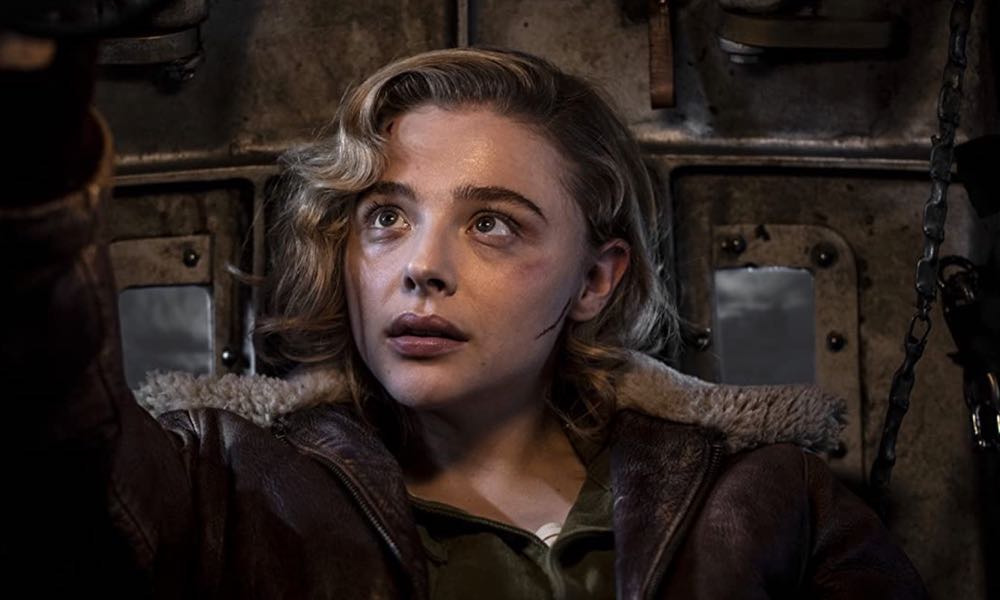 Unique is a word that could be used to describe Shadow In The Cloud, a film that I kept popping up on my radar and that I recently been hearing about until I had to watch it. I have been a fan of Chloe Grace Moretz since falling in love with her as Hit-Girl in the two Kick-Ass movies, and at 23, she continues to blossom as an actress and into full womanhood before our eyes. Since seeing this film, I keep thinking that changing a few things around this would make a pretty good Hit-Girl sequel.

Unfortunately, beyond some truly dazzling visuals, Shadow In The Cloud does not have much going on to recommend it as an enjoyable film or as a good one. This film is unusual because nearly all the film’s events occur inside an old WW II bomber’s cramped quarters. Based on an insane premise and a plot that is so contrived and flimsy and absurd, it’s hard to believe this writing passed muster. It’s a story obviously contrived to portray men’s crudeness and interiority compared to a superior woman. The film portrays Chloe’s character, the only woman in the movie, as not only smarter and more intelligent than her male counterparts, but as braver, stronger, more resilient, a better shot, etc. In fact, the men are so useless in this film; they are basically used mostly as just part of the context the film’s events take place in, reduced to a sort of background noise. This film has little to do with reality; it’s nearly purely romantic fantasy.

Still not familiar with this title? Shadow in the Cloud is a 2020 action horror film directed by Roseanne Liang, from Liang and Max Landis’s screenplay. It stars Chloë Grace Moretz, Taylor John Smith, Nick Robinson, Beulah Koale, and Callan Mulvey. Its plot deals with a World War II air force servicewoman who is on a mysterious mission, only to have a gremlin attack the bomber she is riding on.

Part of what movies do is manipulate their audiences emotionally, but it seems like this film was meant to manipulate an 8-10 year -old emotionally. It’s as if the film’s producers thought we would get so caught up in this film’s events that we would forget to think. One of the film’s characters asks Maude as he is dying, “what were you thinking?” Good question, because Maude’s reasons for getting on that plane are questionable at best

After her character arrives at the last moment with a mysterious package and she more or less bullies her way onto the plane just before take-off, early parts of the film have Maude (Moretz) trapped inside a gun turret aboard a bomber during WW II. For a while, it’s difficult to determine where Shadow In The Cloud plans to go narrative-wise ss; the film almost becomes a claustrophobic one-woman show in which Maude downs an enemy plane nobody else could see as this absurd situation continues maybe overly long.

Next, with  Maude still stuck in the turret, the film serves up this almost human-sized rat/bat creature, a 21st-century meaner version of that famous Twilight Zone creature that only Shatner could see, a gremlin. The film continues to escalate the creature’s activity and its impending conflict with Maude until it actually enters the plane and starts killing the crew. When the creature gets hold of the mysterious package, all hell breaks loose, and Maude becomes like a force of nature because, as we soon learn, she becomes a mother protecting her child. The film’s big reveal is the mysterious package turns out to be Maude’s recently born baby, who doesn’t make a peep or cry when all the action is going on., but suddenly remembers how to cry at the end of the film when all the activity dies down, giving Maude a final shot nursing her child-like some prototypical madonna.

This is the film’s highlight, with conflict taking place high up above the clouds resulting in some gasp-inducing visuals. Unfortunately, the rest of the film is disappointing. It’s not Chloe’s fault entirely, although she still has some growing to do. It’s another classic situation where the best thing about this film is its visual effects, and we have learned long ago it takes more than some nice visuals to make a film enjoyable.